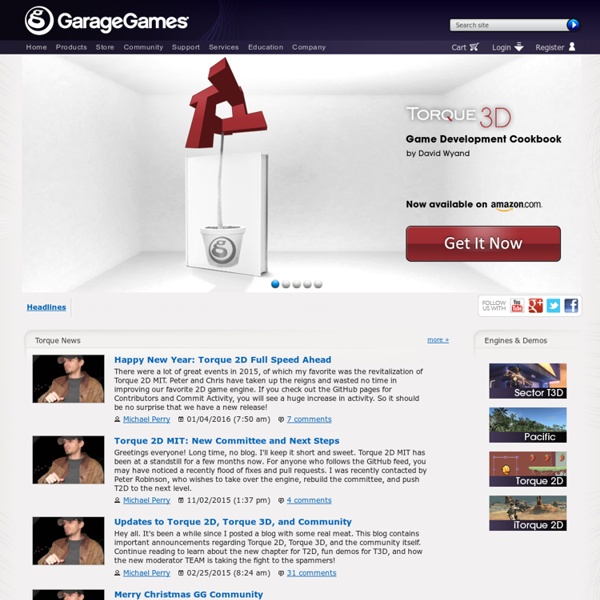 Torque 2D 3.0 Update It has been a little while since the last official update regarding the 3.0 release of Torque 2D. 3.0 is getting closer and closer to release but development has been rather slow. Before we dive into the major features of 3.0 and the remaining work the Steering Committee wanted to give a huge shout out and thanks to the following people for contributing to Torque 2D. Author Michael Perry Date 04/01/2014 (9:44 am) DevQuest / GG Interactive As you may have read recently in the latest post from Eric Preisz, GarageGames has formed a new professional services business and brand called GG Interactive.

One-Stop Android Game Development Solution Accelerated development time, incredible support, and massive distribution within Papaya's Social Network helped our game become a huge hit on Android. - LoL Studio Creator of Cafe Fever Casual Games as a Business Here you will find a variety of Complete Projects, Samples and other useful tools for Unity. Most of these assets are provided via the Asset Store which allows us to keep you updated with new versions - so remember to check for updates on these assets in the editor periodically. Samples Game Jam menu template (Unity 5.x) Download Particle Callbacks demo (Unity 4.x) UDK Unreal Developer's Kit What is UDK? The Unreal Development Kit is the free edition of Unreal Engine 3 that provides access to the award-winning 3D game engine and professional toolset used in blockbuster video game development, architectural visualization, mobile game development, 3D rendering, digital films and more. Who is it for? Unreal Engine technology is used by game developers, researchers, television studios, machinima directors, artists and students. If you have an idea that needs to be brought to life in a game engine, you might consider UDK.

The Top iPhone Game Development Resources For Beginners « game producer blog This post is for myself. I wanted to get some information about how to do iPhone games and what resources I should read to get familiar with this stuff. After digging a long hole in the Internet I found some gold – so to speak. Create an Android/iOS Game Without Knowing How to Code Did you know that you don’t need to know how to code to create amazing android and iOS games? In this review, I will show you software that makes it really easy to create simple and advanced games. Plus I’ll show you some really cool games that were made using each program. What You Will Learn 1.

JavaScript JavaScript (JS) is a lightweight, interpreted, programming language with first-class functions. While it is most well-known as the scripting language for Web pages, many non-browser environments also use it, such as node.js and Apache CouchDB. JS is a prototype-based, multi-paradigm, dynamic scripting language, supporting object-oriented, imperative, and declarative (e.g. functional programming) styles. Read more about JavaScript.

List of game engines Many tools called game engines are available for game designers to code a game quickly and easily without building from the ground up. Free/libre and open source software[edit] Note: The following list is not exhaustive. It mixes game engines with rendering engines as well as API bindings without any distinctions. iOS Game Programming Overview Who this Article is For iOS games are an exciting, large, and rapidly growing market. Every day dozens of games are released for Apple’s iOS-based iPhone, iPod, and iPad. Game Engines A game engine is the core library functions used in a game, usually related to graphics, input, sound, networking and other systems. Engines are separate from game-specific code, which enables different games to use the same engine. (Games of different genres even, in some cases.) Engines have different features. When picking an engine, you have to pay attention to whether or not it satisfies the needs of your game. Engine Overview

Turbulenz - Developers The SDK contains everything a developer needs to rapidly get their project going, polished and deployed, including: A complete version of the JavaScript Engine code is available for developers to browse and use during debugging. The Engine is completely modular allowing developers to select exactly what features they want to use, and modify or replace anything that isn't suitable for their game.

Wintermute Engine » features Wintermute Engine is literally packed with various features to provide the game developers with as much flexibility as possible. The feature list below is in no way complete; If you are interested in game development, we recommend that you download the development kit, check the enclosed documentation, experiment with the example projects and visit our forum. Resolution and colors

Visionaire Studio - the Adventure Game Creator Visionaire Engine Dear Visionaire-ites, it has been a long time coming... After several exhausting months - for the devs, not us - of hard work, sweat, tears, & stubborn determination, we have finally reached the next big milestone, in our quest for the ultimate adventure game engine. We are proud to present Visionaire Studio 4.0 beta, the [i]cross-platform[/i] edition of our game engine. AGS Download AGS Which version of Windows are you running? > Windows Vista, Windows 7, Windows 8 Great! Just download AGS from the link below and you're ready to go. > Windows XP, Windows 2000