27 Pancakes Worth Waking Up For 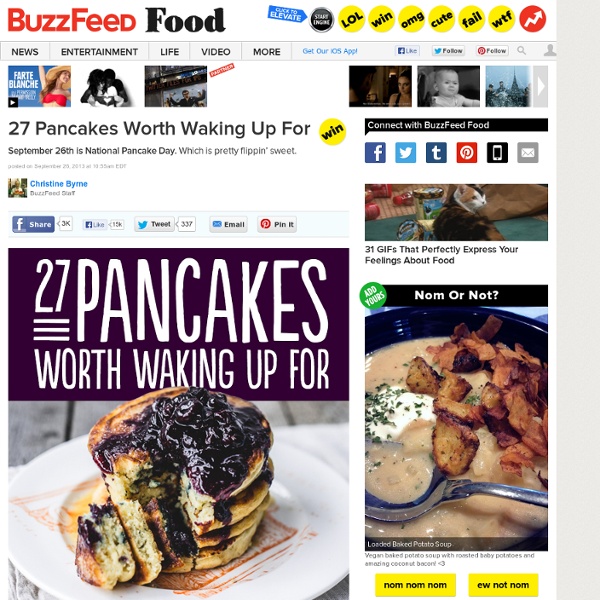 Roasted Butternut Pumpkin Soup w/ Crunchy Maple Croutons Loading ... The last few days here in the southeast corner of Queensland have felt just like summer. It seems mother-nature has decided we’re not getting spring this year; the weekend was hot and hazy and yep every little bit like summer. So it may seem strange that I turned on the oven and cooked up this super warming pumpkin soup. And I admit it is a little strange but, after a long weekend visiting family and friends in Brisbane, both Cam and I felt like a nice big bowl of yummy comfort Sunday food. Pumpkin soup being one of our absolute favourites I was inspired by my brother Tim’s recent tales of mouthwatering homemade roasted pumpkin soup and decided it was high time to try something similar. This simple soup recipe is easy to prepare with only a few tasty ingredients. I found a lovely butternut pumpkin at our local farm store and teamed this with purple garlic and red onion all roasted to sweet golden deliciousness before being transformed into a rich creamy soup.

Peeta's Stuffed Cheese Buns What do you get when you mix bread, cheese, Hunger Games, cheese, and cheese? Say it with me: Stuffed Cheese Buns. And guess what, they're really quick and easy to make. Sorry I keep making a bunch of Peeta food. Don't hate, but I'm not actually on "team Peeta". You know, sometimes I wonder if he's actually my great-great-great grandson. Anyways, even if we weren't related, I need a real man who can protect me from psychopathic teenagers in the woods. But what food does Gale have to offer? See, since Peeta and I have the same mind, I know exactly what he would bake. Not that I'm actually going to make these again tomorrow night when we watch the movie. But Peeta, you still are my grandson, even if I'm not on your "team". These only take about an hour. You just roll it into a ball, stick a hunk of cheese in, and then pinch it back together so that it can't escape. Once it's completely sealed, throw some more cheese on top. I put some fresh oregano in my butter.

84th&3rd | Rainbow Whole-Fruit Ice Pops Sitting on the concrete floor of my mother’s friend’s flowershop I sorted and searched through the little plastic pieces for the right colour. Pop, pop, pop the little pegs broke through black paper, twinkling as they released the light. I followed the Lite Brite patterns until I used them all up and started making up my own designs — swirls and zig-zags and 5-year-old interpretations of trees — from the little points of colour. And then a question, asked casually and without pressure, that would open a whole other world. “Oh J”, called from across the room, “do you know about the colour wheel?” Within moments of those six coloured pegs being arranged in a circle on the back-lit board my young life changed. Red and yellow made orange, yellow and blue made green, blue and red made purple and then all again. It was at once completely logical, yet entirely magical, and from that point on everything existed as a rainbow (or if it didn’t I tried my hardest to make it so). Rainbow Fruit Pops Tips

Holy Heck Brownies These Holy Heck Brownies are the perfect brownie filled with caramel, Snickers and white chocolate chips…Over the top good! Does the world need another brownie recipe? Really? Well, yes. Because there’s a brownie out there for everyone…chewy, cakey, fudgy…dark, milk, white…frosting, no frosting…caramel filled, peanut butter filled… The list goes on for infinity. So today I will add to the list. And these suckers are bad to the bone. You’ve got a fudgy brownie…filled with white chocolate, Snickers, caramel, and chocolate chips. Totally Holy Heck. And they’re pretty easy too. First whisk together your flour, sugar, salt, cocoa powder… almost all the things… Then melt some butter and mix in some eggs and vanilla. Take 1 cup of batter out and reserve it. Then spread the rest of the batter into a prepared pan.. Then you need to top it off. By the way, I used these nifty unwrapped Snickers Bites I found. First white chocolate chips, then Snickers Bites, then caramel. Just think of it like a brownie hat.

Secret Ingredient Stovetop Mac and Cheese You guys, our water was just off for almost two whole days. I repeat: TWO WHOLE DAYS. Almost. The pump in the well was broken or something. It was wretched. I spent most of the time guarding the kitchen, sullenly eying the mountains of dishes which had already accumulated and biting the heads off of anyone who wished to add to the heap. When it came to be about lunch time I could see all the hungry eyes glancing furtively toward the cupboards full of my clean dishes and I knew I had to make a move.I had just been browsing Pinterest (something I... ahem... seldom indulge in...) and had stumbled upon this recipe for cheese sauce and it inspired me with its use of corn starch and evaporated milk. I did dirty one bowl to photograph it in though.

Tortilla Chip Crusted Oven-Fried Ravioli with Spicy Fontina Queso Fundido. It is official, I COULD do Mexican food all the time… but for now I will limit it to just this week. Oh, and the title? Do not run off screaming thinking you have to make your own ravioli. Seriously, please do not do this. There, I said it. I will be the first person to admit that homemade ravioli is not the easiest, or the most fun thing to make, but I will say that you will never, ever, beat homemade ravioli. But, I know people are busy and no matter how much they may want to make their own ravioli, they just do not have the time, so I gave you the option. Trust me, I get it. Anyway, I decided that since I do write a food blog I would just make my own, and you know what? I think I am getting better! And the ravioli? It is like fried ravioli, but without all the hot oil that spatters all over. Yes. But probably the best part of this appetizer/snack or ok… (honestly) our dinner? Queso Fundido. Kind of perfect for New Years Eve, right? What?!? Ingredients 1 cup buttermilk 1/4 cup whole wheat flour