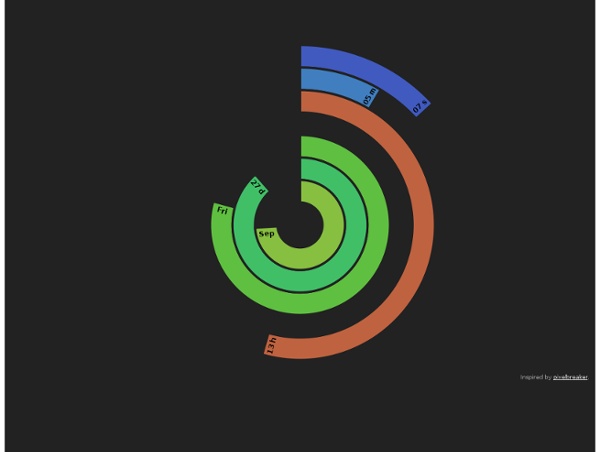 LHC Detects Evidence of New Physics After nearly 6 months of smashing particles, the Large Hadron Collider has seen signs of something entirely new. Pairs of charged particles produced when two beams of protons collide seem to be associated with each other even after they fly apart. “It is a small effect, but it is very interesting in itself,” said physicist Guido Tonelli, spokesperson for the LHC’s CMS experiment. Tonelli and colleagues announced the results in a seminar at CERN September 21 and in a paper submitted to the Journal of High Energy Physics. The LHC finally got up and running in March after more than a year of false starts. Beams of protons were smashed together in the 17-mile-long ring at energies of 7 teraelectronvolts (TeV) — three times the energy that had been achieved before.

WebGL Water Loading... Made by Evan Wallace This demo requires a decent graphics card and up-to-date drivers. 10 Strange Things About The Universe Space The universe can be a very strange place. While groundbreaking ideas such as quantum theory, relativity and even the Earth going around the Sun might be commonly accepted now, science still continues to show that the universe contains things you might find it difficult to believe, and even more difficult to get your head around. Theoretically, the lowest temperature that can be achieved is absolute zero, exactly ?273.15°C, where the motion of all particles stops completely.

Liquid universe Public release date: 13-Oct-2004 [ Print | E-mail Share ] [ Close Window ] UK CONTACT - Claire Bowles claire.bowles@rbi.co.uk 44-207-611-1210New Scientist Press Office, London Robert Lanza, M.D.: Does the Past Exist Yet? Evidence Suggests Your Past Isn't Set in Stone Recent discoveries require us to rethink our understanding of history. "The histories of the universe," said renowned physicist Stephen Hawking "depend on what is being measured, contrary to the usual idea that the universe has an objective observer-independent history." Is it possible we live and die in a world of illusions?

Boy discovers microbe that eats plastic It's not your average science fair when the 16-year-old winner manages to solve a global waste crisis. But such was the case at last May's Canada-Wide Science Fair in Ottawa, Ontario, where Daniel Burd, a high school student at Waterloo Collegiate Institute, presented his research on microorganisms that can rapidly biodegrade plastic. Daniel had a thought it seems even the most esteemed PhDs hadn't considered.

Download Graphic Images from the Hillis/Bull Lab Return to "Download Files" Page You are welcome to download the following graphic image of the Tree of Life for non-commercial, educational purposes: Tree of Life (~3,000 species, based on rRNA sequences) (pdf, 368 KB) (see Science, 2003, 300:1692-1697) This file can be printed as a wall poster. Printing at least 54" wide is recommended. Simple mechanisms explained Email Below you’ll find animated diagrams and explanations of how various mechanisms work. Some of these have been crucial to major evolutions in mechanisms and technology, and allow us to do anything from fire weaponry to make cars move with the press of a pedal. Maltese Cross mechanism powers second hand movement in the clock: Radial engines are used in aircraft.