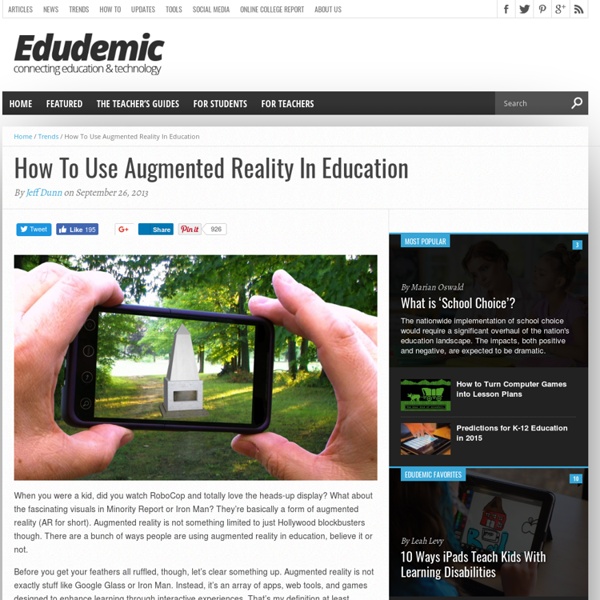 When you were a kid, did you watch RoboCop and totally love the heads-up display? What about the fascinating visuals in Minority Report or Iron Man? They’re basically a form of augmented reality (AR for short). Augmented reality is not something limited to just Hollywood blockbusters though. There are a bunch of ways people are using augmented reality in education, believe it or not. Before you get your feathers all ruffled, though, let’s clear something up. In an effort to shed some light on the current tools and teachers using AR, I thought it might be useful to assemble a list of what we’re seeing these days. In any case, here are just a handful of interesting AR use cases that you should check out. Project Glass The most famous AR project is being, of course, led by the folks at Google. MITAR Games Star Walk This was one of the earlier iPhone apps that really caught the attention of the world. Second Life Second Life is actually a pretty old school AR game nowadays. AR Development Lab

Putting the World In Their Hands: Augmented Reality in the Classroom Augmented reality at Avenues: The World Schools By Courtney Pepe When many of today’s teachers who grew up in Generation X are asked to reflect on traditional learning objects from their classrooms of the 1980’s and 1990’s, they think of paper, pencils, chalkboards, and textbooks.

Augmented reality in education: teaching tool or passing trend? What some may call an 'unsurprising' 71% of 16 to 24-years-olds own smartphones, so why aren't teachers utilising these in the classroom or campus? Is the use of these devices going to detract from the learning process or contribute to future workplace skills? Should teachers be using techniques such as augmented reality (AR) to engage students and develop their skills for the modern world? How to Transform Your Classroom With Augmented Reality Augmented Reality is changing education. What started out as something that was simply “cool” has become a way to engage learners like never before. In fact, while I was first introduced to Augmented Reality through the Aurasma App, I never imagined that while walking through a trendy neighborhood in Washington D.C. this past summer, I would come across the first public interactive augmented reality mural dedicated to the life of the actor Paul Robeson.

Infographic - How We Use AR - Touchstone Research Both Virtual Reality and Augmented Reality are growing in popularity across a variety of industries. The reputation of both is that they are primarily used for gaming and entertainment; however AR is actually being used to assist doctors, engineers, teachers, and more in their professions. By introducing AR into the classroom, students will have a new way to learn by being able to see a 3D view of what would have been images in a text book. Doctors can use AR when examining patients, allowing for a 3D view of bones and organs to assist with proper patient diagnoses. For travelers, AR can give added information on landmarks and can even overlay pieces of history onto one’s current field of view—imagine being able to see an ancient temple that is now in ruins before your eyes!

Where Can Augmented Reality Take Education? - Extreme Networks Augmented reality is an overlay of information onto the real-world through a smart phone, tablet, special glasses or a head-mounted display. The Pokémon Go craze created a belief that augmented reality is a new idea, however, it’s actually been around for years, going back to the 1950s. Augmented reality (AR) isn’t just a visual effect, it can apply to any or all of your senses. Applications for the technology are endless; it can be used in gaming, communications, research, training, education, and more. There are mobile apps that transform the head-mounted display into a looking glass or a sensory device. Some apps, similar to Pokémon Go, project augmented objects onto the real world through a phone’s camera.

Objetos inteligentes The Smarter Objects system explores a new method for interaction with everyday objects. The system associates a virtual object with every physical object to support an easy means of modifying the interface and the behavior of that physical object as well as its interactions with other "smarter objects". As a user points a smart phone or tablet at a physical object, an augmented reality (AR) application recognizes the object and offers an intuitive graphical interface to program the object's behavior and interactions with other objects.

20 Ways to Use Augmented Reality in Education Second Life proved an incredibly valuable tool for educators hoping to reach a broad audience — or offering even more ways to learn for their own bands of students. Augmented Reality Development Lab: Affiliated with Google, Microsoft, and Logitech, the Augmented Reality Development Lab run by Digital Tech Frontier seeks to draw up projects that entertain as well as educate. The very core goal of the ARDL involves creating interactive, three-dimensional objects for studying purposes. Augmented Reality: A new way of augmented learning Augmented learning is defined as an on-demand learning technique where the learning environment adapts to the needs and inputs from learners [1]. Broadly speaking, "environment" here does not have to be constrained into the physical learning environment such as classroom, but could refer to such learning environment as digital learning environment, through which learners can stimulate discovery and gain greater understanding. The technologies conventionally used for augmented learning incorporate touchscreens, voice recognition, and interaction, through which the learning contents can be geared toward learner's needs by displaying plain texts, images, audio and video output. For example, in mobile reality system, the annotation may appear on the learner's individual "heads-up display" or through headphones for audio instruction [2]. This system has been shown to improve life-time learning performance. What is Augmented Reality?

Life on MARS: Location-Independent Augmented Reality GPS-based Augmented Reality is great for a mobile game like Ingress, but it won't help you fix your car. New software from PAR Works has a visual take on Augmented Reality, bringing the benefits of the concept to an entirely new class of applications. It might even work its way into gaming, too. Current implementations of AR usually tie into your phone or tablet's location features (GPS, compass, etc.) to determine exactly what to show you.

5 Top Augmented Reality Apps for Education The concept of augmented reality has been in existence for a few years now despite the fact that many users of mobile devices are under the impression that it is a new phenomenon. New technologies such as Google’s augmented reality glasses which are the first computing eyewear are still in the testing phase. This leads mobile device users to believe augmented reality is new on the horizon. Pin it