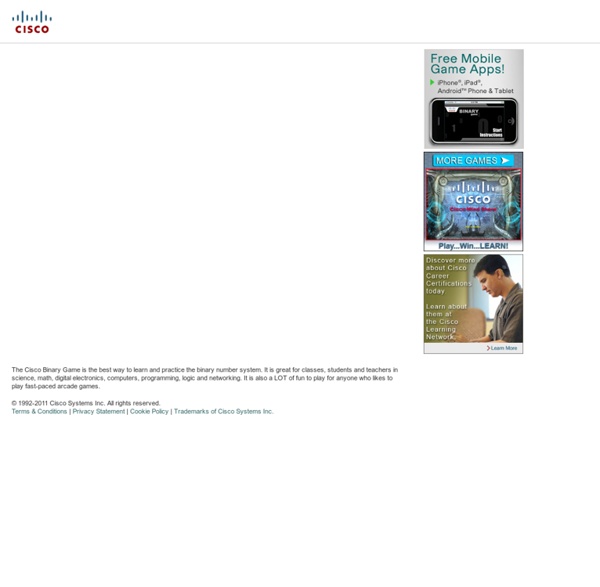 Skip to Content | Skip to Footer Cisco Binary Game The Cisco Binary Game is the best way to learn and practice the binary number system. It is great for classes, students and teachers in science, math, digital electronics, computers, programming, logic and networking. It is also a LOT of fun to play for anyone who likes to play fast-paced arcade games.

Binary, Decimal and Hexadecimal Numbers Decimals To understand Binary and Hexadecimal numbers, it is best to know how Decimal Numbers work. Every digit in a decimal number has a "position", and the decimal point helps us to know which position is which. The position just to the left of the point is the "Units" position. Parabola Try kicking the ball: © 2015 MathsIsFun.com v 0.85 Definition A parabola is a curve where any point is at an equal distance from: a fixed point (the focus ), and a fixed straight line (the directrix )

Learn Minecraft Hour of Code Grades 2+ | Blocks Moana: Wayfinding with Code Make a Flappy game Drawing This tutorial is for Processing version 1.1+. If you see any errors or have comments, please let us know. This tutorial is from the book, Learning Processing, by Daniel Shiffman, published by Morgan Kaufmann Publishers, Copyright 2008 Elsevier Inc. Starter kit of components Also see: Tools for electronics | Making a workbench If you are new to electronics and would like to try adapting published projects, or designing and building your own circuits, you need to have a small stock of components available. However, there is a very wide range of components and it can be difficult to know which ones you really need!

Fundamentals of Data Representation: Binary fractions So far we have only looked at whole numbers (integers), we need to understand how computer represent fractions. You should have learned at Primary School how a decimal fraction works: As you can see, the column headings have been extended to Basic Logic Gates The 'Exclusive-NOR' gate circuit does the opposite to the EOR gate. It will give a low output if either, but not both, of its two inputs are high. The symbol is an EXOR gate with a small circle on the output. The small circle represents inversion.

The Ultimate Puzzle Site - Logical Puzzles A rather silly car thief stole, without knowing it, the car of the chief of police. The police immediately started an investigation and based on witness depositions, four suspects were arrested that were seen near the car at the time of the crime. Because the chief of police took the case very seriously, he decided to examine the suspects personally and use the new lie detector of the police station. Each suspect gave three statements during the examinations, which are listed below: