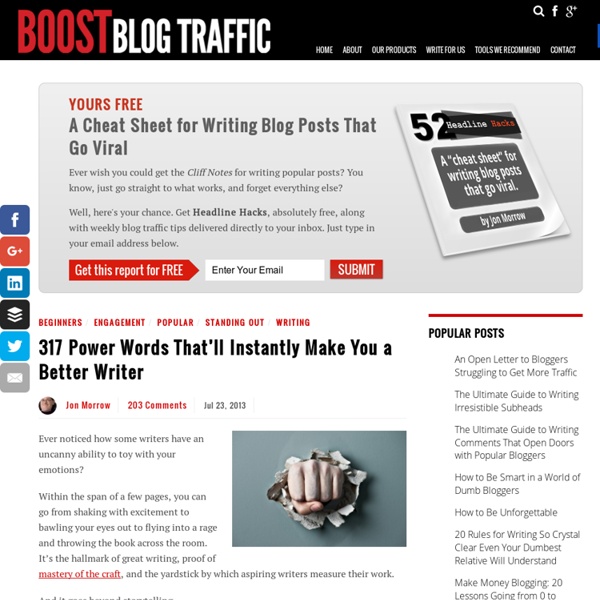 Ever noticed how some writers have an uncanny ability to toy with your emotions? Within the span of a few pages, you can go from shaking with excitement to bawling your eyes out to flying into a rage and throwing the book across the room. It’s the hallmark of great writing, proof of mastery of the craft, and the yardstick by which aspiring writers measure their work. And it goes beyond storytelling. Sure, taking the reader on an emotional roller coaster ride is essential in novels and short stories, but what about emails, resumes, blog posts, proposals? They’re all designed to influence the reader in some way. Maybe you want to impress them, get them excited, make them cautious, get them angry, encourage them to keep going, or any number of emotions. So, you might wonder… how? The good news is it can be yours. How to Instantly Become a Better Writer It’s simple: Use power words. Rather than describe what I mean, let’s deconstruct an example from the great Winston Churchill: Inspiring, right?

Building an Access Database From the Ground Up In this series of Microsoft Access tutorials, we follow the database administrators for Patrick's Widgets as they build a Microsoft Access database from the ground up. Below you'll find the complete listing of tutorials in this series. If you'd like to work through these lessons slowly, but on a regular basis, the tutorial series is available as a free weekly e-mail course.

Why are white people expats when the rest of us are immigrants ? In the lexicon of human migration there are still hierarchical words, created with the purpose of putting white people above everyone else. One of those remnants is the word “expat”. What is an expat? And who is an expat? Business Coaching Mentoring This coaching expert didn't create a coaching business so he could retire. He's still out in the field selling and working his coaching business. And in this interview, you'll hear what he's been up to for the last couple of years along with 10 of his most recent coaching case studies that illustrate important lessons about his (HMA) Hidden Marketing Assets System. Richard has his business down to a science and that's probably because he knows how to close deals by showing prospects the money. According to Richard, if you can't show decision makers where their companies are losing money, you're just another marketing guy - and businesses are tired of those. So in this interview, you'll hear exactly how Richard closes his deals and where he finds his coaching clients.

IMF Executive Board Concludes 2015 Article IV Consultation with the United Kingdom Press Release No. 16/71 February 24, 2016 On February 12, 2016, the Executive Board of the International Monetary Fund (IMF) concluded the Article IV consultation1 with the United Kingdom. The UK economy has been growing steadily. Economic recovery has been driven by robust expansion of private domestic demand and has supported rapid job growth, with the unemployment rate falling to 5.1 percent in late 2015. Looking forward, growth looks set to continue, averaging around 2.2 percent over the medium term. Inflation, which is currently very low (0.3 percent in January 2016), is expected to rise slowly as disinflationary effects from past commodity price falls and sterling appreciation dissipate, and as wages increase.

The X Factor (UK series 12) On 27 March 2015, Dermot O'Leary announced that he was quitting the show, after eight series, in order to pursue other projects. On 16 April, ITV confirmed that former contestant Olly Murs and Caroline Flack would take over presenting the show, having worked together as hosts before on the The Xtra Factor. They became the first duo to host the show.[2]

Writer Creates “Color Thesaurus” To Help You Correctly Name Any Color Imaginable Ingrid Sundberg, a writer and children’s book illustrator, created a very useful infographic chart for anyone struggling with color names. The writer says that she loves to collect words that can help give her stories variety and depth. “I’ve learned that we all have different associations with color words,” Sundberg told Bored Panda. “For example the color sapphire is a light blue to me (since that’s the color of the sapphire on my engagement ring), but a sapphire can also be a very dark blue. I doubt there can be an ‘official color guide,’ as color is so subjective.” Regardless of the subjectivity of color, however, Sundberg’s guide will help expand your descriptive vocabulary beyond green, red and blue.

Beautiful Lake Front Beach Lodge Surrounded By Game Parks - Malawi Property For Sale Or Rent at BestRealEstatePlanet.com On the Northern shores of Lake Malawi, Central Africa, lies Chitimba Beach Lodge & Campsite. Chitimba is a village situated 90km south of the Malawi/Tanzania border Karonga, and 120km from the capital of the north, Mzuzu. The lodge is set on a beautiful golden sand beach, amongst banana palms and papaya trees, surrounded by the famous Livingstonia and Nyika mountains. It lies off a newly complete tarmac road (only a few potholes!) Guide for Writers: Latin Phrases It’s a matter of taste and style, but not long ago American writers attempted to demonstrate their credentials to the world by including Latin and French phrases within works. A dash of Latin was expected of the moderately educated throughout the Western world. annus mirabilis - wonderful year arbiter elegantiae - judge of the elegant; one who knows the good things in life bona fides - good faith; credentials carpe diem - sieze the day; enjoy the present

Survey Detail - Growthink.com PLEASE NOTE: If you are not a subscribing merchant, you may not solicit ResellerRatings reviews. Answers may amend any of these terms in its sole discretion by posting the revised terms. Your continued use of the Shopper Ratings and/or ResellerRatings website(s) or materials after the effective date of any such amendment constitutes your agreement to be bound by such amendment. Marketing Consulting Business Plan Sample - Strategy and Implementation We will obtain our first clients through word-of-mouth from the board of directors and board of advisors as well as the previous connections of Paul Berry's freelance business. Each mini-site will contain a small "powered by MarketCamp" logo which will lead to information about us. Because of the quality of our work, and the desirability of our expertise, we expect to add a number of clients in the near future. 5.1 Competitive Edge

Shopping Cart - PME Online Shop PME Trading has enabled its users a free delivery on orders above 250 AED. We accept payment via Paypal for all online orders. If you choose the Paypal option when completing your order, you will be transferred to an SSL-encrypted Paypal server, where you can complete the purchase and enter payment details. We will be notified by Paypal as soon as the payment has been successfully completed.