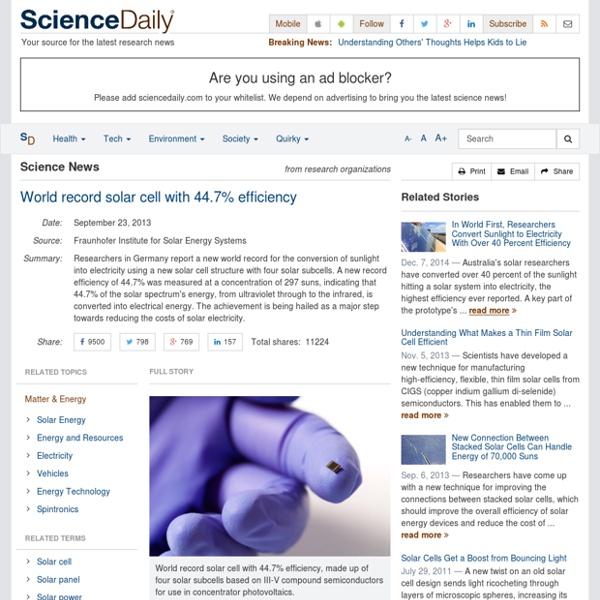 The Fraunhofer Institute for Solar Energy Systems ISE, Soitec, CEA-Leti and the Helmholtz Center Berlin jointly announced today having achieved a new world record for the conversion of sunlight into electricity using a new solar cell structure with four solar subcells. Surpassing competition after only over three years of research, and entering the roadmap at world class level, a new record efficiency of 44.7% was measured at a concentration of 297 suns. This indicates that 44.7% of the solar spectrum's energy, from ultraviolet through to the infrared, is converted into electrical energy. This is a major step towards reducing further the costs of solar electricity and continues to pave the way to the 50% efficiency roadmap. Back in May 2013, the German-French team of Fraunhofer ISE, Soitec, CEA-Leti and the Helmholtz Center Berlin had already announced a solar cell with 43.6% efficiency.

Paper-thin printed solar cells could provide power for 1.3 billion people The cost of solar power has declined dramatically over the past few decades, from $40 per watt in 1977 to $0.74 per watt in 2013. This trend is expected to accelerate as improvements in efficiency and new technologies come online. This is good news for citizens of developed countries who want to make the switch to a cleaner and increasingly cheaper energy source. The shift to solar may be most dramatic for those living in developing countries. Thanks to inexpensive printed solar cells, 1.3 billion people currently without electricity may be able to plug in for the first time. Paper-thin solar cells require only an industrial printer to manufacture and are inexpensive to produce.

22 Astonishing Places That Are Hard to Believe Really Exist Our world is so full of wonders that new and amazing places are discovered every day, be that by professional photographers or amateurs. Different geographical locations, climatic conditions and even seasons offer the widest variety of natural wonders: pink lakes, stunning lavender or tulip fields, breath-taking canyons and mountains, and other places you can hardly believe actually exist! Some of the pictures in this collection will be of all natural sights you can find while traveling around the world, while the others have experienced human interference – but even in these cases, the result of such collaboration is spectacular. The Japanese learned how to tame thousands of orchids and form a romantic tunnel out of them; another one was formed all the way in Ukraine by a passing train; and what eventually ends up as hot tea in our mugs, first grows in stunning tree fields in Asia.

Smart tattoo generates electricity from sweat, could power future wearable computers Smart tattoos are the hottest thing since mood rings. When they become commonplace, they will be a great way to eavesdrop on both vital signs and not-so-vital signs. The only thing that seems to be holding them back, is getting power to them. Joseph Wang, a researchers from UCSD, has now come up with a way to generate power for these devices without using any external equipment. Six Things Education Can Learn From Neuroscience Neuroscience studies a very complex system: the brain. Much has been learned through formal research of the brain, especially due to the advent of brain imaging technologies which afford increased breadth of research using human subjects. That said, what we know remains very limited, given the complexities of both the organ and the practical application of research findings. However, we can point to six findings that give us new and profound insight into our grey matter.

A Material That Could Make Solar Power “Dirt Cheap” A new type of solar cell, made from a material that is dramatically cheaper to obtain and use than silicon, could generate as much power as today’s commodity solar cells. Although the potential of the material is just starting to be understood, it has caught the attention of the world’s leading solar researchers, and several companies are already working to commercialize it. Researchers developing the technology say that it could lead to solar panels that cost just 10 to 20 cents per watt. How You Can Go Solar Without Even Owning A Single Panel by Loraine Chow We know that solar power in the U.S. is growing at leaps and bounds and is only getting cheaper. Still, there are limitations. Not everyone has the ability to harness the sun’s power, especially if you’re not a property owner, don’t have the proper rooftop or can’t afford the costly solar panel installation process. Enter Yeloha, a new Boston-based peer-to-peer solar startup that allows anyone to go solar.

Dallas Ends Five Decades of Water Fluoridation, Saves $1 Million a Year nsnbc : Dallas City Council members decided to consider ending the fluoridation of the city’s water supply. The decision was made after months of regular visits by citizens to city council meetings, warning about the risk involved with water fluoridation. Dallas City Council member Sheffie Kadane discussed ending the the fluoridation with City Manager A.C. Gonzales. On Wednesday, ardent anti-fluoridation advocates were surprised, when months of regular visits to City Council meetings had another result than usual, reported NBC5 Dallas Fort Worth. After five decades, Dallas will consider stopping the practice that has been implemented to counter tooth decay, a practice that since has shown to be inefficient and to cause more harm than good.

New 3D Modeling Technique – Will it make 3D scanners obsolete? What happens when you want to take a tangible object and replicate it through the process of 3D printing? If you are like most, you will either try and find a CAD file for that object somewhere on the internet, which will probably end up leaving you empty handed, or you will use the most common method currently available — 3D scanning. 3D scanners, however, are quite pricey and unless you are using a really high quality device, you probably will need to modify the virtual version of the object quite a bit, once scanned into your computer. Researchers at the Centro de Investigaciones en Optca (CIO) in Mexico, appear to have come up with a better solution; a solution that could be quite a bit more affordable, yet even more reliable than current 3D scanning technology.

15 Steps to Cultivate Lifelong Learning “The real voyage of discovery consists not in seeking new lands, but in seeing with new eyes.” – Marcel Proust“I don’t think much of a man who is not wiser today than he was yesterday.” – Abraham Lincoln“I have never let my schooling interfere with my education.” – Mark Twain Assuming the public school system hasn’t crushed your soul, learning is a great activity. It expands your viewpoint. It gives you new knowledge you can use to improve your life. How it Works Watch this: Watch 3 actual turbines in action! SheerWind’s INVELOX Wind Delivery is simply a better way to harvest wind energy. Wind is captured at the top of the funnel shaped INVELOX system. The omnidirectional intake area allows wind collection from any directionWind is funneled through the systemWind is concentrated and further accelerated in the Venturi Effect* section of the INVELOX system. *The Venturi effect is the phenomenon that occurs when a fluid that is flowing through a pipe is forced through a narrow section, resulting in a pressure decrease and a velocity increase.Wind is delivered to the turbine/generators to convert the accelerated wind to electrical power.

Researchers Identify New Method for Manufacturing Perovskite Solar Cells By Alexander Chilton Image Credit: Padture lab | Brown University A research team at Brown University have developed a new technique to produce light-absorbing perovskite films for use in flexible, thin and high efficiency solar cells. This new method involves using a solvent bath at room-temperature in order to generate perovskite crystals instead of using a blast of heat as in other conventional crystallization techniques. Free-Spiritual-Energy-Disc-of-Your-Choice- The offer: the first 20 people that sign up for a Crystal Clarity membership will receive a free Spiritual Energy Disc of their choice. Yup. I said it. A *free* disc!

NASA Invents a Folding Solar Panel Inspired by Origami A prototype of a new solar panel inspired by origami. Twenty years ago Brian Trease was a high school exchange student in Japan. It was there that he first learned the art of paper folding. “I’d be folding subway ticket stubs, baseball game lineups; there’s a picture of me in McDonalds in the city of Kobe holding a big origami crane that I had just folded [out of a hamburger wrapper],” he recalls. Educational Blogs You Should Be Investigating Feb07 Today’s topic again focuses on another valuable teacher freebie, and free is in my price range. How about you?