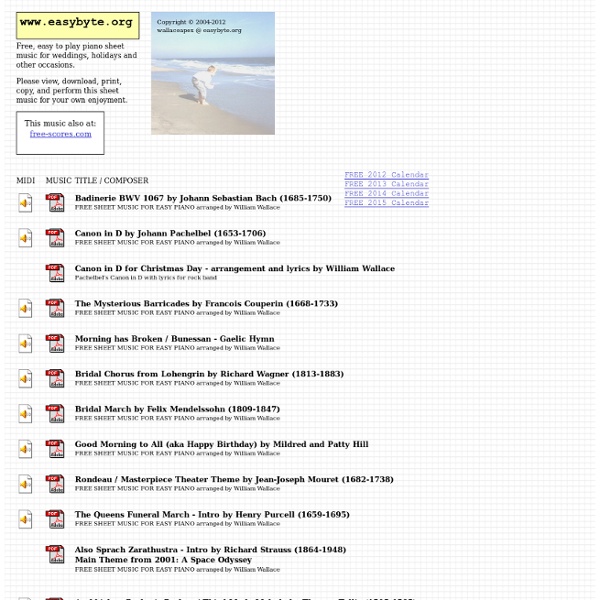 Janet Lanier Free Piano Sheet Music Join Our Facebook Group... "Your entire site is simply fantastic. I really loved it. Now I am learning the basics of piano by myself, with your really great help. Jaime C. from Brazil Learn all about how your brain processes information, and how to maximise your piano practice time. The Ultimate Piano Learning Kit Check It Out Now! "I only started to play about six weeks ago but the last hour of watching your videos about chord progressions has been something of a revelation. Stephen Roberts from U.S.A "I'm a beginning keyboardplayer and your video's are an excellent guide. Wouter E. from the Netherlands "Thanks for all your work ( tuto and others ). Anthony Hassen Cohen from France "I really appreciate what you do for piano lovers and i'll let everyone interested i know to come visit your website and see how magnificent it is organized and how much you are really helpful to us beginners." Mohamed B. from Egypt "Thank you so much for all these piano lessons! Luis S. from the U.S.A

Shortcuts to Hit Songwriting This easy-to-use guide will show you how to write a song, from finding a great title to writing your melody. Hands-on songwriting exercises will jump start your creativity, while ‘how-to’ video tutorials are a fun way to find out more. by Robin Frederick. Request permission to reprint What comes first, melody or lyrics? If a song genuinely expresses your feelings, then it’s a good song. So, how do you write a song that moves other people and makes them want to listen? ‣ What is song craft and why do I need it??? Good songwriters use song craft to give their songs emotional impact and create a memorable experience for listeners. The simple, time-tested ideas on this page will help you create a song that expresses your feelings and moves listeners, keeping them involved and interested in what you have to say. ‣ How does a song get started? Getting started can be one of the hardest tasks in songwriting. So which comes first – lyrics, melody, or chords? Trouble getting started? To top of page

Free Bach Music for Piano, the Lovely and Easy Prelude in C in Original Form Such lovely Bach music as the Prelude in C is music every piano student should eventually have in their repertoire. Fortunately, it is not very hard, even in its original form, offered here as a free printable download. This beautiful and famous piano music by Johann Sebastian Bach makes great wedding music. Here's a fellow on a harpsichord playing this popular Bach piece: Although it may sound -- and look! When your students' hands can reach an octave, and they are beginning to recognize chord inversions, they will be able to learn this piece easily. Free Bach music -- the original Prelude in C from the Well-Tempered Clavier. For piano students whose hands are too small for the octaves, or who aren't ready or willing to take on the entire piece, there is a different way to sneak some original classical piano music onto their plate... In an effort to press more classical music upon my students, I started something new last year which I call "Classical Samplers," or "Classical Soundbites."

Writing Better Songs - Part III - Writing an Effective Melody To get the most out of this feature, it's suggested you read Writing in Major Keys and Writing in Minor Keys before proceeding. Writing an Effective Melody Of all the aspects involved with creating new songs, working on writing a strong melody is undoubtedly the most commonly overlooked in modern pop/rock music. This wasn't always the case; the "pop" songwriters of the 1930's and 1940's focused greatly on writing melodies. In many cases the melody was the basis for a song, with lyrics and chords added later. Generally, the process of writing a song is much different nowadays.

Triple harp Welsh triple harp by Tim Hampson The triple harp, often referred to as the Welsh triple harp (Welsh: Telyn deires), is a type of harp employing three rows of strings instead of the more common single row. The Welsh triple harp today is found mainly among players of traditional Welsh folk music. History[edit] The triple harp first originated in Italy, under the form of two rows of strings and later three, as the baroque harp (Italian: Arpa Doppia). The triple harp was quickly adopted by the Welsh harpers living in London during the 17th century. The compass of the Triple Harp, in general, is about five octaves, or thirty-seven strings in the principal row, which is on the side played by the right hand, called the bass row. The skill of harp making in Wales had all but been lost for some 60 years until John Weston Thomas (MBE), a talented wood and metal worker, revived the craft, making Celtic, chromatic and triple harps until his death in 1992. Playing techniques[edit] Modern players[edit]

Writing Better Songs: Part II - Writing in Minor Keys In the previous feature, we examined the basics of writing songs in major keys, and before you tackle Part II of this feature, it's advised that you familiarize yourself with that aspect of songwriting. Sometimes, the theme or mood you wish to create with a song doesn't suit the generally "happy" sounds that a major key tends to provide. In these situations, a minor key is often the best choice for your song. Which isn't to say that a song written in a minor key has to be "sad", or that a song written in a major key need be "happy". Many songwriters will use both major and minor keys within their songs, perhaps choosing a minor key for the verse, and a major key for the chorus, or vice versa. We've got lots more to discuss, but before we do, we need to learn what chords we can use in a minor key.