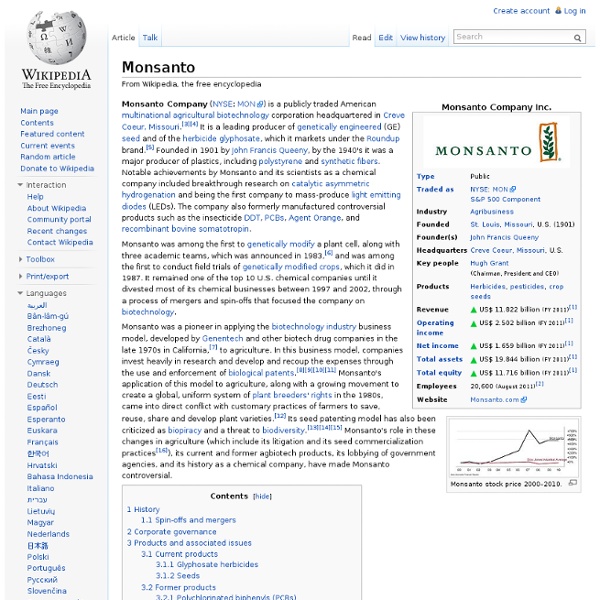 Founded in 1901 by John Francis Queeny, by the 1940s Monsanto was a major producer of plastics, including polystyrene and synthetic fibers. Notable achievements by Monsanto and its scientists as a chemical company included breakthrough research on catalytic asymmetric hydrogenation and being the first company to mass-produce light emitting diodes (LEDs). The company also formerly manufactured controversial products such as the insecticide DDT, PCBs, Agent Orange, and recombinant bovine somatotropin (a.k.a. bovine growth hormone). Monsanto was among the first to genetically modify a plant cell, along with three academic teams, which was announced in 1983,[9] and was among the first to conduct field trials of genetically modified crops, which it did in 1987. History[edit] In the beginning (Early 1900s): Saccharin and chemicals[edit] Monsanto was founded in St. In 1926 the company founded and incorporated a town called Monsanto in Illinois (now known as Sauget). Spin-offs and mergers[edit]

Paul Otlet Paul Marie Ghislain Otlet (/ɒtˈleɪ/; French: [ɔtle]; 23 August 1868 – 10 December 1944) was a Belgian author, entrepreneur, visionary, lawyer and peace activist; he is one of several people who have been considered the father of information science, a field he called "documentation". Otlet created the Universal Decimal Classification, one of the most prominent examples of faceted classification. Otlet was responsible for the widespread adoption in Europe of the standard American 3x5 inch index card used until recently in most library catalogs around the world (by now largely displaced by the advent of the online public access catalog (OPAC)). Otlet wrote numerous essays on how to collect and organize the world's knowledge, culminating in two books, the Traité de Documentation (1934) and Monde: Essai d'universalisme (1935).[1][2] Early life and career[edit] His father kept him out of school, hiring tutors instead, until he was 11, believing that classrooms were a stifling environment.

Monsanto Google Google is an American multinational corporation specializing in Internet-related services and products. These include online advertising technologies, search, cloud computing, and software.[8] Most of its profits are derived from AdWords,[9][10] an online advertising service that places advertising near the list of search results. Google was founded by Larry Page and Sergey Brin while they were Ph.D. students at Stanford University. Together they own about 14 percent of its shares but control 56 percent of the stockholder voting power through supervoting stock. History Google's original homepage had a simple design because the company founders were not experienced in HTML, the markup language used for designing web pages.[29] Google began in January 1996 as a research project by Larry Page and Sergey Brin when they were both PhD students at Stanford University in Stanford, California.[30] Financing, 1998 and initial public offering, 2004 Google's first production server. Growth 2013 onward

Tulip mania A tulip, known as "the Viceroy", displayed in a 1637 Dutch catalog. Its bulb cost between 3,000 and 4,150 guilders (florins) depending on size. A skilled craftsman at the time earned about 300 guilders a year.[1] Tulip mania or tulipomania (Dutch names include: tulpenmanie, tulpomanie, tulpenwoede, tulpengekte and bollengekte) was a period in the Dutch Golden Age during which contract prices for bulbs of the recently introduced tulip reached extraordinarily high levels and then suddenly collapsed.[2] The 1637 event was popularized in 1841 by the book Extraordinary Popular Delusions and the Madness of Crowds, written by British journalist Charles Mackay. History[edit] A Satire of Tulip Mania by Brueghel the Younger (ca. 1640) depicts speculators as brainless monkeys in contemporary upper-class dress. The tulip was different from every other flower known to Europe at that time, with a saturated intense petal color that no other plant had. Available price data[edit] Modern views[edit]

SUSPECT Michael R. Taylor - Wiki Michael R. Taylor is the Deputy Commissioner for Foods at the United States Food and Drug Administration (FDA). Early career[edit] He received a B.A. degree in political science from Davidson College and a law degree from the University of Virginia. In 1981 he went into private practice at King & Spalding, a law firm, one client of which was the biotechnology company Monsanto,[3] where he established and led the firm's food and drug law practice.[1][2] On July 17, 1991, Michael Taylor left King & Spalding, returning to the FDA to fill the newly created post of Deputy Commissioner for Policy. USDA[edit] Between 1994 and 1996 he moved to the United States Department of Agriculture (USDA), where he was Administrator of the Food Safety & Inspection Service. Later career[edit] Between 1996 and 2000, after briefly returning to King & Spalding, he then went to work for Monsanto as a Vice President for Public Policy.[14] In 1999, a lawsuit (Alliance For Bio-Integrity v. References[edit]

Haijin The Haijin (Chinese: 海禁; pinyin: Hǎi Jìn; literally "sea ban") order was a ban on maritime activities imposed during China's Ming Dynasty and again at the time of the Qing Dynasty. Intended to curb piracy, the ban proved ineffective for that purpose. Instead it imposed huge hardships on coastal communities and legitimate sea traders.[citation needed] Ming policy[edit] The Ming Hongwu Emperor was the first to propose a policy to ban all maritime shipping in 1371.[1] The Hǎi Jĩn policy consisted of three strategies. Build a navy of 110,000 to defend coastal provinces;Engage with the Japanese authorities to curtail the raiders;Regulate maritime trade to control smuggled goods.[2] The ban was lifted in 1405, reinstated in 1550 then lifted again in 1567. The earliest possible date for implementation of the policy was 1368, the year that the Ming Dynasty came to power whilst the latest possible year when it was terminated was 1567.[3] Qing policy[edit] History of South Ming[edit] Controversy[edit]

Field-Evolved Resistance to Bt Maize by Western Corn Rootworm Background Crops engineered to produce insecticidal toxins derived from the bacterium Bacillus thuringiensis (Bt) are planted on millions of hectares annually, reducing the use of conventional insecticides and suppressing pests. However, the evolution of resistance could cut short these benefits. A primary pest targeted by Bt maize in the United States is the western corn rootworm Diabrotica virgifera virgifera (Coleoptera: Chrysomelidae). Methodology/Principal Findings We report that fields identified by farmers as having severe rootworm feeding injury to Bt maize contained populations of western corn rootworm that displayed significantly higher survival on Cry3Bb1 maize in laboratory bioassays than did western corn rootworm from fields not associated with such feeding injury. Conclusions/Significance This is the first report of field-evolved resistance to a Bt toxin by the western corn rootworm and by any species of Coleoptera. Figures Copyright: © 2011 Gassmann et al. Introduction Methods

@dsm Sakoku A 17th-century European engraving depicting a Dutch tributary embassy to the Tokugawa's residence. With the change to isolationism the bakufu sought to create a tribute system with China as the model. The 1710 Ryukyuan mission, in this scroll a Japanese printer depicts Ryukyuan guards and a music band escorting the envoy and his officials through Edo. With increasingly distant relations with China, the submission of Ryukyu by Satsuma allowed Japan to trade with China via the Ryukyus. Sakoku (鎖国? The term Sakoku originates from the manuscript work Sakoku-ron (「鎖国論」?) Trade under sakoku[edit] Japan traded at this time with five entities, through four "gateways". These two different groups of trade basically reflected a pattern of incoming and outgoing trade. Terminology[edit] Trade in fact prospered during this period, and though relations and trade were restricted to certain ports, the country was far from closed. Rationale[edit] Challenges to seclusion[edit]

Welcome to the SABIC homepage Thirteen Factories The Thirteen Factories, c. 1850 The factories from land Plan of the factories, 1856 Terminology[edit] History[edit] In 1793, attempts were made by King George III who sent representative George Macartney to request that ports in northern China be opened to trade. Organization[edit] Each factory was headed by a Chinese merchant, who went by such business names as Howqua（浩官）, Mowqua, Puankhequa（潘启官）, Goqua, Fatqua, Kingqua, Sunshing, Mingqua, Saoqua and Punboqua.[4] Together the factories formed a guild known as the cohong; the actual number of factories fluctuated over the years, before settling at thirteen in the early 19th Century. The emperor appointed an official called the hoppo (the spelling at the time of 戶部, Hubu, which was short for 粵海關部, Yuehaiguanbu), to take charge and collect taxes from the goods traded. Factories[edit] The Western merchants were allowed to occupy two- or three-story buildings, set back one hundred yards from the river. Thirteen factories[edit] See also[edit]

Sinochem Group Sinochem Corporation (Chinese: 中国中化集团公司) is a Chinese conglomerate primarily engaged in the production and trading of chemicals and fertilizer and exploration and production of oil.[1] Its majority owned fertilizer subsidiary Sinofert is involved throughout the chain from production of the product and procurement on international markets to distribution and retail. Corporate structure[edit] Sinochem deals primarily in petrochemicals distribution, but also in rubber, plastics, and agrochemicals. It operates through more than 100 subsidiaries in China and abroad in concerns ranging from petroleum trading to real estate. Formerly owned directly by the Chinese government, Sinochem converted to a joint-stock company in 2009; initially it is owned by newly formed Sinochem Group (98%) and publicly traded Chinese shipping giant COSCO (2%). History[edit] In August 2009, Sinochem bought the United Kingdom-based oil company Emerald Energy.[2] References[edit] External links[edit]

Old China Trade An 1850–60s painting showing flags of that era's trading nations, Great Britain then ranking first in number of ships and tonnage in Chinese ports, followed by the US, Hamburg (flag on the left) and Denmark The Old China Trade refers to the early commerce between the Qing Empire and the United States under the Canton System, spanning from shortly after the end of the American Revolutionary War in 1783 to the Treaty of Wanghsia in 1844. The Old China Trade represented the beginning of relations between the United States and East Asia, including eventually U.S.–China relations. The Maritime Fur Trade was a major aspect of the Old China Trade. Origins[edit] Growth[edit] Two years after the voyage of the Empress, Shaw set up the firm of Shaw & Randall to advise American firms unfamiliar with trade in the Far East. Trade with China, originally an enterprise of seemingly limited prospects involving significant risk instead turned out to be extremely lucrative. Finding Mediums of Exchange[edit]