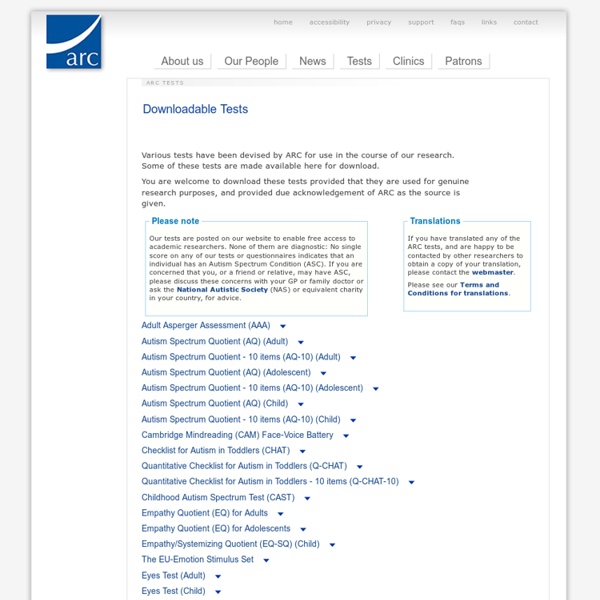 College and university: supporting students with AS Introduction This information sheet is for staff in higher education establishments and universities who currently, or who may in the future, support students with Asperger syndrome or high-functioning autism (HFA). It is relevant for all staff, but in particular for lecturers, tutors, disability advisers, needs assessors and careers staff. What is Asperger syndrome? Aspergers Adult AQ Test Quiz Online: Autism Spectrum Quotient I prefer to do things with others rather than on my own. I prefer to do things the same way over and over again. If I try to imagine something, I find it very easy to create a picture in my mind. I frequently get so strongly absorbed in one thing that I lose sight of other things. I often notice small sounds when others do not. I usually notice car number plates or similar strings of information.

Dual Exceptionality - Aspergers What Lies Beneath! I have searched for years, twelve to be exact, to find out why my beautiful, smart, generous, creative daughter found some every day things really difficult. Why she wouldn’t run to the local shop for a message when other youngsters her age would have been delighted with the opportunity to nip out to the shop. Why she could make friends, but had difficulty keeping them. Why every birthday, Christmas, celebration was a nightmare with over excitement.

ADDitude - Attention Deficit Disorder Information Autism Medication Options If behavioral and educational interventions aren’t sufficient, medication may help. Because children with ASD have unpredictable reactions to stimulants, the most common class of medicines used for ADHD children, they are less likely to be prescribed for autistic children. Empathizing-Systemizing Test This is an combined version of Baron-Cohen's Empathizing Quotient (EQ) and Systemizing Quotient (SQ) tests. Introduction The empathizing–systemizing theory developed by autism researcher Simon Baron-Cohen proposes that on a level below normal personality there are individual differences in the wiring of the brain that result in two different modes a person may process information: empathizing and systemizing. The theory developed out of Baron-Cohen's work with autism where he hypothesized that the autism spectrum is an expression of extreme systemizing, he also adapted it into the extreme male brain theory of autism. E-S theory, particularly its connection to gender differences, is controversial.

Living with Asperger's in college Starting out at college is a tricky time for all people, no matter what your personality is like. However, when you have Asperger’s Syndrome as well, it does make it more difficult. I am a first year journalism student in DIT and can say that, without a doubt, my Asperger’s has made this transition trickier for me in comparison to most of my classmates. Asperger's Syndrome, a developmental disorder, is an ASD (autism spectrum disorder). It impacts mainly on a person’s ability to communicate and socialize, as well as many other things.

Mensa International Founding[edit] Roland Berrill, an Australian barrister, and Dr. Lancelot Ware, a British scientist and lawyer, founded Mensa at Lincoln College, in Oxford, England, in 1946. Asperger Syndrome - University College Cork Definition: Autism Spectrum Disorder (ASD) is a term that is used to describe a series of pervasive developmental, neurological disorders including Autism, Asperger Syndrome/High Functioning Autism (HFA), Pervasive Developmental Disorder-Not Otherwise Specified (PDD-NOS). Autism Spectrum Disorders are characterized by impairments in reciprocal social interaction and communication. In recent years UCC has seen a particular increase in students accessing higher education with Asperger’s Syndrome (AS). AS/HFA is characterized by severe and sustained difficulty in social interaction, and the development of restricted, patterns of behaviour, interests and activities. These two features of the disorder will create a significant impairment in social skills, occupational performance and other areas of functioning.

Triple Nine Society The Triple Nine Society (TNS), founded in 1978, is a 501(c)(7) non-profit voluntary association of adults who have scored at or above the 99.9th percentile on specific IQ tests (or similar) under supervised conditions, which generally corresponds to an IQ of 149 or greater using a standard deviation of 16 (e.g. Stanford-Binet IV) and 146 or greater with a standard deviation of 15 (e.g. WAIS-IV, Stanford-Binet 5).[1] This compares with Mensa International, the better-known and larger membership high IQ society which admits applicants who score at or above the 98th percentile, which generally corresponds with an IQ score of 131 (SD 15) or 133 (SD 16), or greater. As of mid-March 2015, TNS reported over 1,500 members residing in more than 40 countries, with most members residing in the United States and Europe.[2] TNS publishes a journal entitled Vidya which contains articles, poetry and other creative content contributed by members conversant with a variety of subjects.

Preparing for College: Tips for Students with HFA/Asperger's Syndrome * NEW * by Gladys Williams and Ann Palmer — TEACCH These ideas have been compiled from our work with students with high functioning autism/Asperger’s Syndrome who were thinking about or attending college. Each student has a unique profile of strengths and needs, so each recommendation should be considered with the specific student in mind. Gladys Williams and Ann PalmerChapel Hill TEACCH Center Selecting a College When considering which colleges to apply to, there are many dimensions to consider.

List of diagnostic classification and rating scales used in psychiatry List of diagnostic classification and rating scales used in psychiatry From Wikipedia, the free encyclopedia Jump to: navigation, search Families and Adults/Adult Services New! Autism Speaks Joins National Funders to Expand Inclusion in Employment Autism Speaks, Kessler Foundation, May and Stanley Smith Charitable Trust, New York Collaborates for Autism and Poses Family Foundation have collectively committed almost $7.5 million to support groundbreaking work in disability and inclusion in employment in 2014 and 2015. The collective funding allows private companies, non-profit organizations, schools and universities and public agencies to work together in new and innovative ways to expand employment opportunities for individuals with disabilities. The collaboration supports the Pepsi ACT (Achieving Change Together) initiative, as well as the US Business Leadership Network® (USBLN®) "Going for the Gold" initiative.