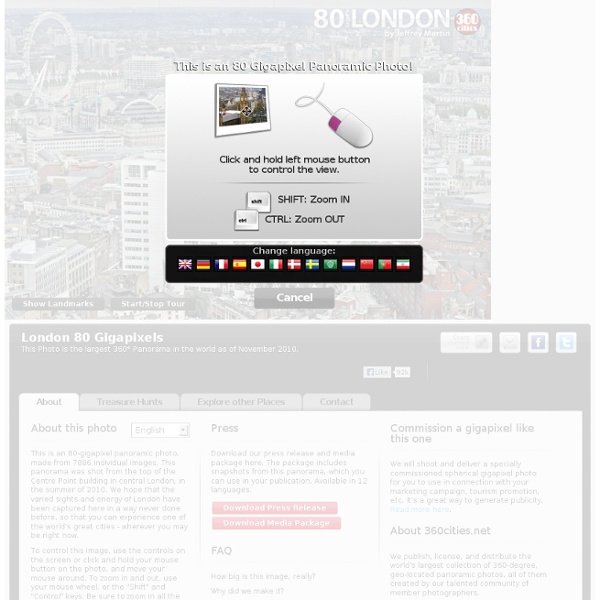 About this photo This is an 80-gigapixel panoramic photo, made from 7886 individual images. This panorama was shot from the top of the Centre Point building in central London, in the summer of 2010. We hope that the varied sights and energy of London have been captured here in a way never done before, so that you can experience one of the world's great cities - wherever you may be right now. To control this image, use the controls on the screen or click and hold your mouse button on the photo, and move your mouse around. To zoom in and out, use your mouse wheel, or the "Shift" and "Control" keys. Your City is Next! If you would like us to create a large gigapixel panorama like you see here, please contact 360Cities. Press Download our press release and media package here. Download press release Download media package How big is this image, really? Why did we make it? How did we make it? I can read license plates and see faces! Will you print this image? Commission a gigapixel like this one

Dyatlov Pass incident The Dyatlov Pass incident (Russian: Гибель тургруппы Дятлова) is the mysterious deaths of nine ski hikers in the northern Ural Mountains on February 2, 1959. The experienced trekking group, who were all from the Ural Polytechnical Institute, had established a camp on the slopes of Kholat Syakhl when disaster struck. During the night something made them tear their way out of their tents from the inside and flee the campsite inadequately dressed in heavy snowfall and sub-zero temperatures. Soviet investigators determined that six victims died from hypothermia but others showed signs of physical trauma. One victim had a fractured skull while another had brain damage but without any sign of distress to their skull.

How to Hide Files in JPEG Pictures If you’re looking to hide files on your PC hard drive, you may have read about ways to encrypt folders or change the attributes on a file so that they cannot be accessed by prying eyes. However, a lot of times hiding files or folders in that way requires that you install some sort of software on your computer, which could then be spotted by someone else. I’ve actually written quite a few articles on how you can hide files and folders in Windows XP and Vista before, but here I’m going to show you a new way to hide files that is very counter-intuitive and therefore pretty safe!

40 Amazing Examples of Macro Photography Macro photography, simply put, is close-up photography. This usually requires a special lens that is optimized to focus sharply on a small area. What I love about macro photography is that it allows us see an entirely different world that is filled with an abundance of detail that usually goes unnoticed by the naked eye. Here is a collection of 40 truly amazing macro photographs from various photographers. To see larger versions of the photographs and to learn more about both the photograph and photographer, be sure to click on the images. 100 Free Foreign Language Classes Online March 1st, 2010 If you have always wanted to learn a language but were too put off by the high cost associated with most classes, then take a look at all these great opportunities to learn a foreign language online, at no cost to you. With so many learning opportunities online, it is a shame not to take advantage of all that you can, so be sure to spend some time with these classes.

Health Tips - Home Remedies That Work at WomansDay.com - Womans Day - StumbleUpon Nobody is naysaying the wonders of modern medicine—what would we do without a medication like penicillin to treat infections? But, as it turns out, everyday items have secret curing powers, too. Next time you don’t want to fork over money to get a common wart removed, consider using duct tape. Already popped two aspirin but can’t get rid of the headache?

How to Crack a Wi-Fi Network. « Arrow Webzine 1.Back Track Today we’re going to run down, step-by-step, how to crack a Wi-Fi network with WEP security turned on. Dozens of tutorials on how to crack WEP are already all over the internet using this method. Seriously—Google it. This ain’t what you’d call “news.”

Amazing Places To Experience Around The Globe (Part 1) Preachers Rock, Preikestolen, Norway Blue Caves - Zakynthos Island, Greece Skaftafeli - Iceland What Is the Illuminati? The Illuminati was an 18th-century secret society made up of numerous influential intellectuals and freethinkers of the time. The organization, which is also known as the Bavarian Illuminati, opposed the Roman Catholic Church's control over philosophy and science; promoted the education of women and their treatment as equals; sought to "enlighten" people's minds and free them from superstitions and prejudices; and tried to reduce the oppression of the state. The Illuminati was the brainchild of Adam Weishaupt, who was the chair of canon law and later the dean of the faculty of law at the University of Ingolstadt in Bavaria (a state in southeast Germany) in the early 1770s, according to "New England and the Bavarian Illuminati" (Columbia University Press, 1918), a nonfiction book about the secret society. So, on May 1, 1776, Weishaupt formed the Order of the Illuminati with four other members.

My Collection of Funny Emails. Send funny emails to your friends! Why didnâ€™t I think of that? Youâ€™ll be uttering those words more than once at these ingenious little tips, tricks and ideas that solve everyday problems... some you never knew you had! Hull strawberries easily using a straw. Rubbing a walnut over scratches in your furniture will disguise dings and scrapes. Remove crayon masterpieces from your TV or computer screen with WD40. Network Monitoring Tools Les Cottrell, SLAC. Last Update: December 14, 2015 ESnet | ESCC | PinGER Internet monitoring | Tutorial This is a list of tools used for Network (both LAN and WAN) Monitoring tools and where to find out more about them. The audience is mainly network administrators. You are welcome to provide links to this web page.

Low birth weight kitten is the cutest little thing youll see all day - The Feed Blog (CBS) - We turn our attention now to the cutest news you'll likely see all day: video of a low birth weight kitten by the name of Marshmallow. Get ready to "ooh" and "aww" over this little guy. And for those who are worried about the furry feline (as we here at The Feed were), the video was posted by YouTube user sweetfurx4 who writes: Marshmallow was born on March 1st with low birth weight (~60% of the normal expected weight at about 66g or 2.3 oz). A month later, Marshy is breaking one pound, about 7 times the birthweight. At this point, we're just thankful that she's made it through the first month.