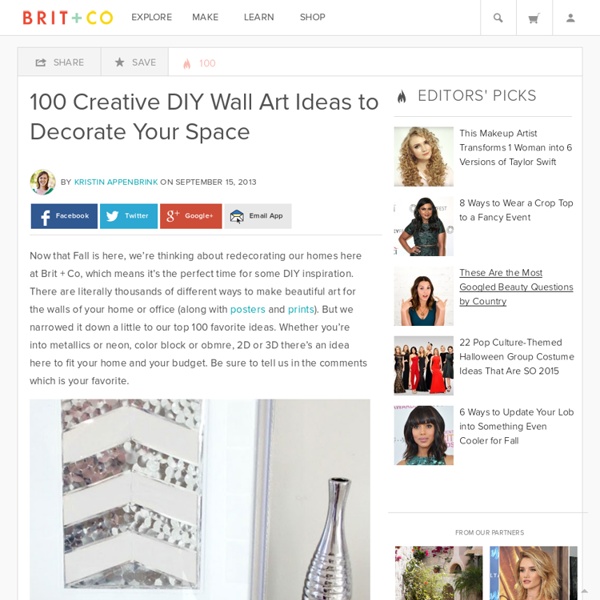 DIY Bikini Update: The Pucker Bottom | Bits, Bites and MishMash (Beach buns courtesy of (Your bum still got you down? Check out some tips for everyday mindfulness here — and don’t sweat the small stuff) Panic. It’s swim season. Enter: the pucker butt bikini. Get your hiney ready, because it’s like a Wonderbra for your ass. 1) Find the sad saggiest pair of bikini bottoms you own…that you still wear and would consider wearing again if they didn’t make your ass look so darn sad. 2) As most non-slutty bikinis are lined with something, pin the two layers together so they don’t wiggle around on you. 3) Cut a strip of 1/4 inch elastic and pin it to the back waistband of your bottoms. 4) If you followed the directions, and stretched the elastic while sewing, it should look something like this. 5) Trim the excess bits and marvel at your handiwork.

DIY JUMBO JENGA | Interiors by Kenz Since I’m posting today, that can only mean one thing: I have given up on life and will only be pseudo-living on the interwebs. I am 1,000,000% done with school AND passed my state exam. (But you already follow me on Twitter and Instagram, so this is old news to you, right?) For you with curious minds, it was my real estate license I was chasing. Thanks for being patient while my blog took the back burner. My cousin Katie got married last weekend (Congrats you two!) In a traditional game of Jenga, there are 54 pieces. Our version of Jumbo Jenga (33 pieces, 11 “layers” tall) used 4 cedar 4×4′s. The cuts were simple, 10.5″ each. I used a square to help mark my cuts. I stacked them as I went. You can make 9 10.5″ Jenga pieces per each 4×4. BUT- something embarrassing happened. Remember how we tore out a half wall AND a closet AND a pantry? It’s all living hiding embarrassingly inside the right half of the garage until I decide to pay for a few Bagsters. The last challenge I had was storage.

Genius or Madness? 6 November 2012 Genius or Madness? Professor Glenn Wilson “Great wits are sure to madness near allied, and thin partitions do their bounds divide” (John Dryden, 1681). “There is no great genius without a tincture of madness” (Seneca, 1st Century A.D.). Many great artists and scientists appear to have gone slightly mad following their lofty achievements. Beethoven and Van Gogh are also said to have gone progressively mad, though the reasons are equally debatable. For others, the genius and madness appear in parallel. John Nash, the Nobel-winning mathematician who developed “game theory” for the social sciences also suffered paranoid delusions throughout his career. Sometimes it is a matter of chance or social milieu that determines whether an individual is deemed brilliant or crazy. Many lists of creative achievers throughout history have been compiled along with mental health symptoms and diagnostic categories retrospectively assigned to them. Could the environment also be involved?

A Little Weird? Prone to Depression? Blame Your Creative Brain Whenever you want to do something extraordinary, risky, or scary in your life (something that you know in your heart that you need to do, but it would really be more convenient to ignore it and just not do it), it’s essential to surround yourself with inspiring, encouraging, like-minded people. If they’re leaders in their own right who to a certain degree have done what you long to do, even better. I first met Gwyneth Leech last summer at my nephew’s first birthday party in Brooklyn (she’s my sister’s husband’s cousin). We were chatting idly until the moment she mentioned that she, a lifelong artist, had “accidentally” started creating art on used coffee cups, drawing to pass time in PTA meetings. I grabbed my notebook and pen and turned our chat into an interview (I know, this isn’t normal birthday party behavior, I do this frequently so you might not want to invite me to yours). “Gwyneth says you have to read this,” Martha told me. 1) “We cannot afford to waste human gifts. Dr.

Being Dishonest Enhances Creativity It’s no secret that people frequently break rules. Whether it’s lying to a friend, stealing someone’s lunch out of the fridge at work, or running a red light, rule breaking is prevalent in our daily lives. Though, in most instances, breaking the rules carries a negative connotation, this isn’t always the case. Take creative thought as an example. Thinking “outside the box” or operating “outside the lines” is at the heart of creativity and is seen in a relatively positive light. Given that both dishonest and creative acts involve rule violations, it begs the question of whether people most likely to bend the rules are also the most creative and, even more so, whether one from of rule breaking – say dishonesty – can trigger creative thinking. Dishonesty – violating the social norm that we should tell the truth – is one form of rule breaking that seems to happen all the time. Answer: Tape For more on creativity, check out my book Choke.