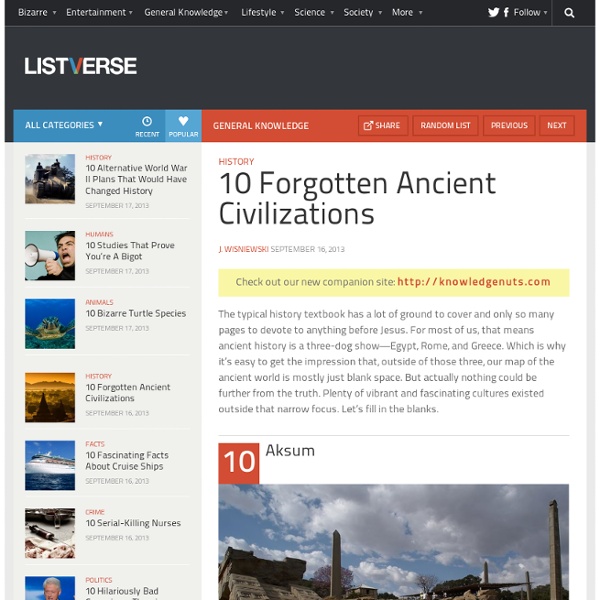 History The typical history textbook has a lot of ground to cover and only so many pages to devote to anything before Jesus. For most of us, that means ancient history is a three-dog show—Egypt, Rome, and Greece. Which is why it’s easy to get the impression that, outside of those three, our map of the ancient world is mostly just blank space. But actually nothing could be further from the truth. Plenty of vibrant and fascinating cultures existed outside that narrow focus. 10Aksum The kingdom Aksum (or Axum) has been the subject of countless legends. The Ethiopian kingdom of reality, not myth, was an international trading power. Aksum adopted Christianity not long after the Roman Empire did and continued to thrive through the early Middle Ages. 9Kush Known in ancient Egyptian sources for its abundance of gold and other valuable natural resources, Kush was conquered and exploited by its northern neighbor for nearly half a millennium (circa 1500–1000 B.C.). 8Yam 7The Xiongnu Empire 5Yuezhi

Poison Hath Been This Italian Mummy's Untimely End Italian warlord Cangrande I della Scala was at his peak when he marched into the city of Treviso as conqueror and ruler of a newly unified northern Italy in 1329. Four days later, he died at the ripe old age of 38. Chronicles of the day suggested that he had made the mistake of drinking from a polluted spring and fell violently ill. 17 Mysteries Awaiting Explanation On August 7th 1999, London police received more than 36 reports of a gigantic sea serpent in the Thames. It was “at least 200 ft long and 5 yards across,” said one panicky witness. Despite all the sightings, no one managed to get a picture—or so it was thought. Astrolabe – Magnificent Computer of the Ancients It is an ancient tool, created over two thousand years ago when people thought that the Earth was the center of the universe. They are often referred to as the first computer and however debatable that statement might be there is one thing for sure without a doubt. Astrolabes are objects of immense mystery and beauty. So what does an astrolabe do and how were they useful in the ancient world?

The Most Bizarre Candies That Actually Exist Everyone loves candy! (Well, maybe not too much candy. And certainly not this candy.) Instead of being appetizing to every sweet tooth, these confections are just, well, confusing. Who thought these were a good idea? Who eats them?

Lost Years Of Jesus The unknown years of Jesus (also called his silent years, lost years, or missing years) generally refers to the period between Jesus's childhood and the beginning of his ministry, a period not described in the New Testament.[1][2] The phrases "lost years of Jesus" is usually encountered in esoteric literature (where it at times also refers to his possible post-crucifixion activities), but is not commonly used in scholarly literature since it is assumed that Jesus was probably working as a carpenter in Galilee from the age of twelve till thirty, so the years were not "lost years", and that he died in Calvary.[2][3][4] The use of the "lost years" in the "swoon hypothesis" suggests that Jesus survived his crucifixion and continued his life.[10] This, and the related view that he avoided crucifixion altogether, has given rise to several speculations about what happened to him in the supposed remaining years of his life, but these are generally not accepted by mainstream scholars.[10][11][12]

70 metal books found in Jordan cave could change our view of Biblical history By Fiona Macrae Updated: 19:36 GMT, 30 March 2011 For scholars of faith and history, it is a treasure trove too precious for price. This ancient collection of 70 tiny books, their lead pages bound with wire, could unlock some of the secrets of the earliest days of Christianity. Academics are divided as to their authenticity but say that if verified, they could prove as pivotal as the discovery of the Dead Sea Scrolls in 1947. Lines of inquiry: The metal tablets could change our understanding of the Bible On pages not much bigger than a credit card, are images, symbols and words that appear to refer to the Messiah and, possibly even, to the Crucifixion and Resurrection.

These Ancient Elongated Skulls Are NOT HUMAN Are you ready to be confronted with evidence that will directly contradict the version of “world history” that you were taught in school? In recent years, hundreds of extremely bizarre skulls have been discovered all over the planet. Scientific tests that have been conducted on some of them conclusively prove that these ancient elongated skulls are NOT HUMAN. Many people are not able to accept what you are about to see because it is too radical for them. Mystery of the Maya Deep within the jungles of Mexico and Guatemala and extending into the limestone shelf of the Yucatán peninsula lie the fabled temples and palaces of the Maya. While Europe still slumbered in the midst of the Dark Ages, these innovative people had charted the heavens, evolved the only true writing system native to the Americas and were masters of mathematics and calendrics. Without advantage of metal tools, beasts of burden or even the wheel they were able to construct vast cities with an astonishing degree of architectural perfection and variety. Their legacy in stone, which has survived in a spectacular fashion at places such as Palenque, Tikal, Tulum, Chichén Itzá, Copán and Uxmal, lives on as do the seven million descendants of the classic Maya civilization.