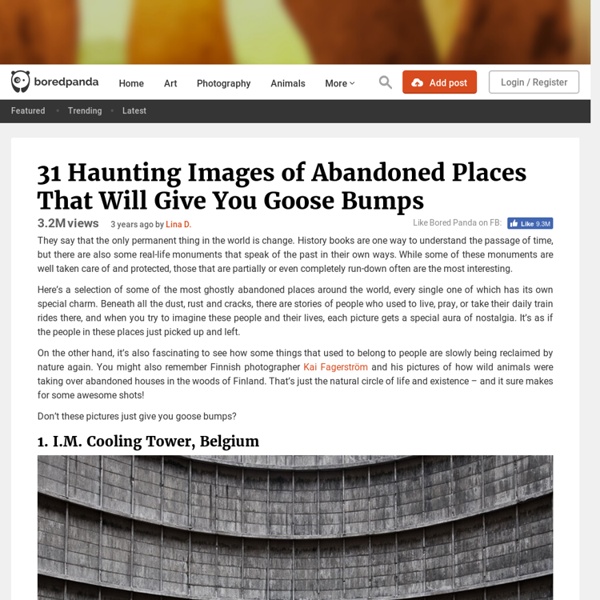 They say that the only permanent thing in the world is change. History books are one way to understand the passage of time, but there are also some real-life monuments that speak of the past in their own ways. While some of these monuments are well taken care of and protected, those that are partially or even completely run-down often are the most interesting. Show Full Text Here’s a selection of some of the most ghostly abandoned places around the world, every single one of which has its own special charm. Beneath all the dust, rust and cracks, there are stories of people who used to live, pray, or take their daily train rides there, and when you try to imagine these people and their lives, each picture gets a special aura of nostalgia. On the other hand, it’s also fascinating to see how some things that used to belong to people are slowly being reclaimed by nature again. Don’t these pictures just give you goose bumps? 1. Thanks for sharing! Image credits: brokenview 2. 4. 5. 6. 7. 8. 9.

Freethought Kampala Elevatorgate is the unprecedented INTERNET WAR that erupted after Rebecca Watson (above) posted a video in which she discussed an ordeal she experienced in an elevator while attending the World Atheist Convention which took place in Dublin, Ireland, from June 3rd to June 5th, 2011. During the months of July and August 2011, the atheist-skeptic blogosphere was ablaze with accusations, counter-accusations, verbal fights, moral declarations and insults as hundreds of bloggers and millions thousands of their readers tried to determine whose assessment of the events narrated by Watson best represented the facts at hand. What also came under much discussion, and perhaps the crux of Elevatorgate, was Watson’s conduct after posting the initial video, particularly her treatment of a female student called Stef McGraw – and the manner in which dissenting opinions were dismissed as being products of misogyny and sexism. Background:

30 Of The Most Powerful Images Ever A picture is worth a thousand words, but not all pictures are created equal. The pictures we usually feature on Bored Panda can be cute, beautiful, funny, or enchanting, but these pictures are powerful. They are gripping and unforgettable because of the volumes they speak about the human condition – about some of the best and worst moments of contemporary human existence. [Read more...] 8 Tips on Starting Your Own Freelancing Career and Being Your Own Boss Who doesn’t want to make their own hours, decide what work to take on, and determine their own pay? The idea of ‘being your own boss’ is attractive, so why don’t more people take the leap and go freelance? Because it’s scary. As a freelancer, you’re essentially running your own small business—you’re responsible for finding clients, convincing them to hire you, and delivering quality work on time.

Amazing Places Preachers Rock, Preikestolen, Norway Blue Caves - Zakynthos Island, Greece Skaftafeli - Iceland Plitvice Lakes – Croatia Crystalline Turquoise Lake, Jiuzhaigou National Park, China Four Seasons Hotel - Bora Bora 40 Must-See Photos From The Past The phrase “a picture is worth a thousand words” was coined by American newspaper editor Arthur Brisbane in 1911. It’s a simple notion that applies to many aspects of our lives, but especially to historical photography. Sometimes, one simple picture can tell you more about history than any story you might read or any document you might analyze. [Read more...] These photographs all tell stories about the historical figures or events that they represent. Once taken simply to document their present, they now help us witness the past.

The 14 Best Life Quotes from Disney Films - Curated Quotes On using your moral compasse… Always let your conscience be your guide. Pinocchio On living life to the fullest… 20 Rare Historical Photos (history, rare, photos, war, past See the past from a different viewpoint in these 20 lesser-known photos of historic events. In 1972, as part of the Apollo 16 mission to the moon, astronaut Charles Duke embarked on a mission to the explore the moon's surface in a lunar roving vehicle. While there, he shot a picture of a photo of himself, his wife, and his two sons which was enclosed in plastic on the moon's surface, where it remains to this day. This is The Statue of Liberty under construction in Paris in 1884.

London designer creates 3D-printed, regenerative running shoes from protocells At the Wearable Futures conference, London designer and researcher Shamees Aden debuted a running shoe concept that will put your worn out kicks to shame. The shoes, which he's developing with University of Southern Denmark professor Martin Hanczyc, are 3D printed from a synthetic biological material that can repair itself overnight. The running shoes are the product of Aden's study of protocells. The basic protocell molecules are not themselves alive, but can be combined to create living organisms. Mixing different protocells creates different properties, and allows them to be programmed to behave differently depending on heat, light, and pressure. The shoes' unique construction allows them to be 3D printed to the exact size of the user's foot, so they would fit like a second skin.

20 Inspirational Quotes About Life - Curated Quotes Need some motivation? Here is a great collection of the 20 most inspirational life quotes ever uttered. You only live once, these quotes will help you make the most of it. The Ultimate Packing List: 62 Things to Take With You on Your Alaska Vacation - Alaska Travel Blog by Princess Lodges Packing for Alaska is not like packing for Hawaii. Depending on when you go, “The Last Frontier” can be chilly or warm, wet or dry. So what should you take? Sacred Texts Timeline Sacred-textsSacred Time Origins of World Religions This is a timeline which gives the history of sacred texts, as well as a few other relevant events. Of course, not all of the dates in this timeline are accurate; some are entirely conjectural.