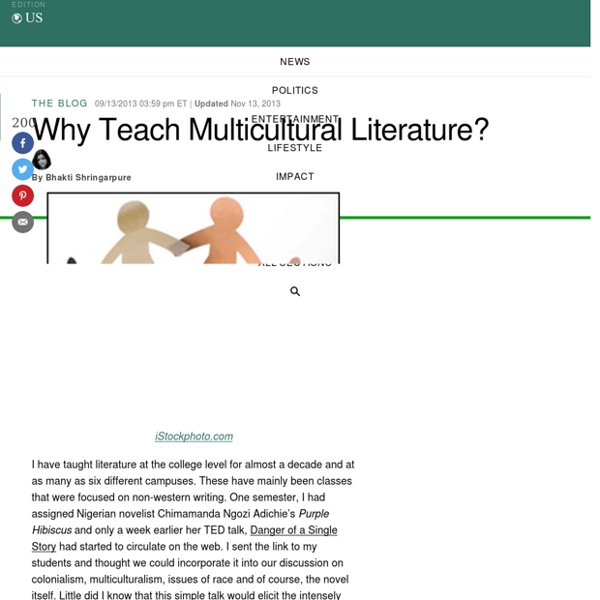 iStockphoto.com I have taught literature at the college level for almost a decade and at as many as six different campuses. These have mainly been classes that were focused on non-western writing. One semester, I had assigned Nigerian novelist Chimamanda Ngozi Adichie’s Purple Hibiscus and only a week earlier her TED talk, Danger of a Single Story had started to circulate on the web. I sent the link to my students and thought we could incorporate it into our discussion on colonialism, multiculturalism, issues of race and of course, the novel itself. Little did I know that this simple talk would elicit the intensely disproportionate response that landed in my inbox the next morning. Why teach U.S. students literature from different countries? Here is the video that set this off, followed by the student’s letter and my response: About the Adichie talk at the TED conference. In my opinion, Adichie perfectly typifies what you could call the ugly side of multiculturalism. My response:

Multicultural Fiction for Teenagers The Absolutely True Diary of a Part-Time Indian by Sherman Alexie. 2007Budding cartoonist Junior leaves his troubled school on the Spokane Indian Reservation to attend an all-white farm town school where the only other Indian is the school mascot. American Born Chinese by Gene Luen Yang. 2006Alternates three interrelated stories about the problems of young Chinese Americans trying to participate in the popular culture. Presented in comic book format. The Astonishing Life of Octavian Nothing, Traitor to the Nation. Vol.

Diversity/Multi Cultural with Language-Literacy Updated January 2013 Some languages have more than one word for what English speakers think of as a single entity. Since ice is so important in their lives, the Inuit people reportedly differentiate among the various kinds, from slush ice to black ice. Have children choose something important to them – stickers, ice cream or ???– and MAKE-UP WORDS for different kinds. Forcing Kids To Stick To Gender Roles Can Actually Be Harmful To Their Health Raising children in societies that adhere to rigid gender roles, with fixed ideas about what should be considered “masculine” and “feminine,” can actually be detrimental to their physical and mental health, according to a study that observed 14-year-olds’ interactions over a three month period. “Usually we think of gender as natural and biological, but it’s not… We actually construct it in ways that have problematic and largely unacknowledged health risks,” lead researcher Maria do Mar Pereira, the deputy director for the University of Warwick’s Centre for the Study of Women and Gender, explained in an interview with ThinkProgress. Pereira drew her conclusions after being embedded in a class of teenagers in Lisbon, Portugal. Pereira observed both boys and girls regulating their behavior in potentially harmful ways in order to adhere to gender norms. “All of the girls were within very healthy weights, but they were all restricting their intake of food in some way.

How to Choose the Best Multicultural Books How do you know if a children's book you're about to share with your students accurately portrays the culture of its characters? Are there warning signs to look for? Are there telltale things that mark an outstanding multicultural book? To answer these questions, Scholastic Teacher magazine invited five children's literature specialists to give us their candid advice on selecting books about or related to Native Americans, Latinos, African Americans, Jews, and Asian Americans. Strategies To Support Multicultural Instruction Essential for developing multicultural/diverse perspective learnings is a positive and trusting classroom environment - one in which all students are made to feel welcome, comfortable, and respected. Listed below are several strategies that are particularly useful in promoting multicultural/diverse perspective learnings in such a classroom. Questioning Styles

The 5 Biases Pushing Women Out of STEM By now, we’ve all heard about the low numbers of American women in science, technology, engineering, and math (STEM). Some argue it’s a pipeline issue – that if we can interest more young girls in STEM subjects, the issue will resolve itself over time. But that’s not convincing. After all, the percentage of women in computer science has actually decreased since 1991.

Characteristics of Quality Multicultural Literature It's not on the list: An exploration of teachers' perspectives on using multicultural literature. By: Stallworth, B. Joyce; Gibbons, Louel; Fauber, Leigh. Journal of Adolescent & Adult Literacy, Mar2006, Vol. 49 Issue 6, p478-489, 12p. (Journal Article) Guiding principles for teaching multicultural literature. ERIC - Multicultural Literature and Young Adolescents: A Kaleidoscope of Opportunity, Journal of Adolescent & Adult Literacy, 2006-May Adolescents seek to understand who they are and where they belong in the world. Quality young adult literature can familiarize them with a broader view of the world, open doors in their minds, and reveal similarities and differences among a multitude of others who have struggled with similar issues. Literature that provides a range of perspectives can broaden young adolescents' vision of self and the world, providing an avenue for reflection and a means for personal development. Quality multicultural literature can also help to interrupt prejudice and misunderstanding by exposing unacknowledged bias and intolerance.

Adolescents and Young Adults Skip directly to A to Z list Skip directly to navigation Skip directly to page options Skip directly to site content Follow STD Sexually Transmitted Diseases (STDs)Life Stages and Populations Adolescents and Young Adults How Cultural Differences Influence Adolescent Development The parents of adolescents have the main responsibility of teaching children ethics. Scholars of adolescent behavior and authors of "Family and Peer Influences on Adolescent Behavior and Risk-Taking," Nancy Gonzales and Kenneth Dodge, note that while much of adolescent development happens outside the home, the culture of the family instills upon children their developmental roots. Parents coming from difference cultures emphasize different value sets and therefore teach their children different moral standards. For example, because honesty is an important concept in the West, American parents urge their children not to lie, even in situations where lying would be beneficial. On the contrary, parents from East Asia tend to focus on creating a sense of both social and family harmony. These parents are more willing to overlook lies, provided those lies contribute to harmony, such as in white lies that avoid hurting others' feelings.

Article- Making Connections: Culturally Responsive Teaching and the Brain In reality, cultural responsiveness is more of a process than a strategy. It begins when a teacher recognizes the cultural capital and tools students of color bring to the classroom. She is then able to respond to students' use of these cultural learning tools positively by noticing, naming, and affirming when students use them in the service of learning. The most common cultural tools for processing information utilize the brain's memory systems -- music, repetition, metaphor, recitation, physical manipulation of content, and ritual.