“Tip-of-the-Tongue Syndrome,” Transactive Memory, and How the Internet Is Making Us Smarter 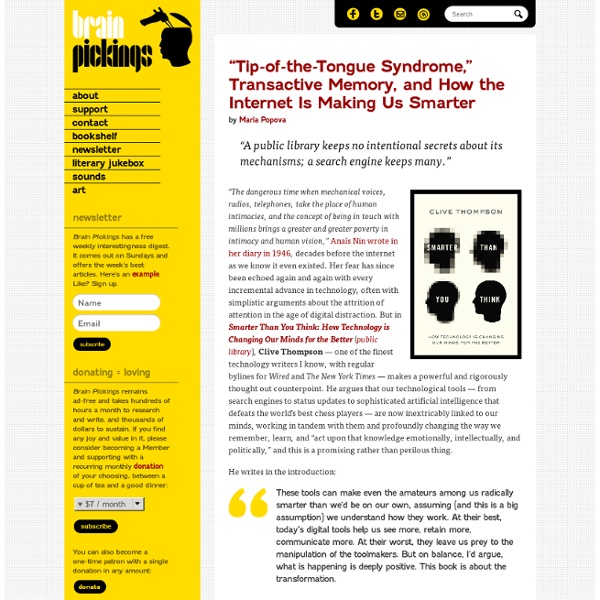 by Maria Popova “A public library keeps no intentional secrets about its mechanisms; a search engine keeps many.” “The dangerous time when mechanical voices, radios, telephones, take the place of human intimacies, and the concept of being in touch with millions brings a greater and greater poverty in intimacy and human vision,” Anaïs Nin wrote in her diary in 1946, decades before the internet as we know it even existed. Her fear has since been echoed again and again with every incremental advance in technology, often with simplistic arguments about the attrition of attention in the age of digital distraction. But in Smarter Than You Think: How Technology is Changing Our Minds for the Better (public library), Clive Thompson — one of the finest technology writers I know, with regular bylines for Wired and The New York Times — makes a powerful and rigorously thought out counterpoint. He writes in the introduction: Page from 'Charley Harper: An Illustrated Life' Donating = Loving

GHDI - Document Vietnam – Analysis of an Example All economy is political economy in the broadest sense, and the system of advanced industrial society is global, also in the sense that it delivers all dimensions of human existence, private and public, to the ruling societal powers. The system is also global in the sense that there are no longer any external factors for this system, that the forces furthest removed, geographically and otherwise, become forces within the system. Domestic policy, which is extended into international policy, mobilizes and controls people’s inner lives, the structure of their drives, their thoughts and feelings; it controls spontaneity itself – and, corresponding to this global and total character of the system, the opposition, of which I will now speak, is not only and not primarily political, ideological, and socialist; but rather, also an instinctively moral or, if you will, an immoral, cynical, existential opposition.

How to Focus A Wandering Mind, by Wendy Hasenkamp New research reveals what happens in a wandering mind—and sheds light on the cognitive and emotional benefits of increased focus. We’ve all been there. You’re slouched in a meeting or a classroom, supposedly paying attention, but your mind has long since wandered off, churning out lists of all the things you need to do—or that you could be doing if only you weren’t stuck here… Suddenly you realize everyone is looking your way expectantly, waiting for an answer. Change Your Entire Life With This Simple Technique From Thich Nhat Hanh. It’s Kind Of Amazing! get elephant's newsletter To be beautiful means to be yourself. You don’t need to be accepted by others. You need to accept yourself. ~ Thich Nhat Hanh I was visiting a friend in New York City this past weekend as we discussed various elements of all things spiritual.

Aerogramme Writers' StudioStephen King's Reading List for Writers “If you don’t have time to read, you don’t have the time (or the tools) to write. Simple as that.” ― Stephen King In the afterword to his acclaimed guide On Writing: A Memoir of the Craft, Stephen King shares the following reading list of 96 books, covering a diverse range of fiction and non-fiction titles. Accompanying the list is this explanation: 12 Things You Never Knew On How To Think Effectively Effective thinking is something that can be practiced and developed over time. Everything begins and ends with the brain-heart connection. How you think either connects or disconnects the two. Here are some ways to think effectively that you never thought could be so easy. 1. Identify and reverse negative core beliefs.

Five Hidden Dangers of Facebook A Facebook login page is seen on a computer screen in Ottawa, Ontario, Canada Thursday, August 27, 2009. Facebook is agreeing to give users more control over their information in response to concerns raised by Canadian privacy officials. (AP Photo/The Canadian Press, Adrian Wyld) AP Photo/Adrian Wyld 5 Brainwashing Tricks That Work No Matter How Smart You Are #2. Everyone Has the Same Moral Code, They Just Use It Differently Win McNamee/Getty Images News/Getty Images

6 Ways to Enhance Your Problem Solving Skills Have you ever thought of yourself as a problem solver? I’m guessing not. But in reality we are constantly solving problems. And the better we are at it, the easier our lives are. Problems arise in many shapes and forms. Facebook Addiction' Activates Same Brain Areas As Drugs; How Social Media Sites Hook You In The 2014 social media update from the Pew Research Center showed Facebook continues to be the most popular of the social media sites. Though platform growth has slowed, the level of user engagement has increased, researchers said. Seventy percent of Facebook users engage with the site daily while 45 percent do so several times a day — a 63 percent increase from 2013. More importantly, Facebook has significant overlap with other platforms.

You Don’t Have to Be the Boss to Change How Your Company Works Most workplaces face constant imperatives for change—from trivial-seeming matters such as installing new office printers to major ones such as implementing new policies to support diversity. The question of how to drive change, though, is perennially vexing. Some things make it easier: If you are the boss, you can order change (although that doesn’t always work). If you have a broad coalition, you can create the perception of a flood of support. If people rely on your work output, you can impose conditions on how and when you’ll deliver it. From The Trenches To The Web: British WWI Diaries Digitized : Parallels hide captionThe British National Archives has digitized and posted online about 1.5 million pages of diaries from soldiers and units that fought in World War I. Here, a photo of the 12th (Prince of Wales') Lancers Group. From a private collection, provided courtesy of the National Archives On the outskirts of London, in a basement room of the British National Archives, a historian delicately turns pages that have the brittle feel of dead leaves. Each is covered in text — some typewritten, some in spidery handwriting from a pen that scratched across the page 100 years ago.

Mnemonic Peg Memory System Description The Peg System is a mnemonic method for learning and remembering lists of items. The method works by associating each item in the list with a previously learned "peg word" that represents the numerical position of the item.. For very short lists, peg words can be simple rhymes for the numbers, for example: BunShoeTreeDoorHiveSticksHeavenGateWineMenLeaven (dough)Shelve Top 10 Thinking Traps Exposed — How to Foolproof Your Mind, Part I Our minds set up many traps for us. Unless we’re aware of them, these traps can seriously hinder our ability to think rationally, leading us to bad reasoning and making stupid decisions. Features of our minds that are meant to help us may, eventually, get us into trouble. Here are the first 5 of the most harmful of these traps and how to avoid each one of them. 1. The Anchoring Trap: Over-Relying on First Thoughts