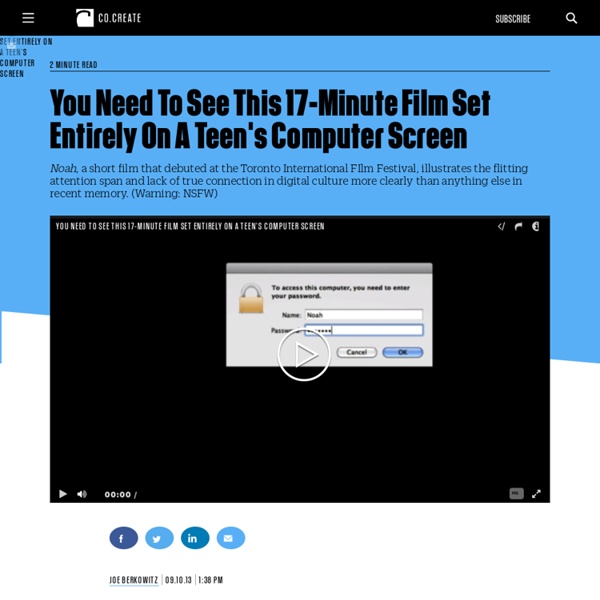 These words are probably unfurling inside one of many open tabs on your computer screen. Perhaps one tab is for work, one is for chatting, and another is for Twitter. You probably even have some others open for no particular reason. This is the way we receive information and the way we communicate now: constantly, simultaneously, compulsively, endlessly, and more and more often, solitarily. This strange new mode of living—and its indelible effect on our humanity—is perfectly captured in a new short film that debuted this week at the Toronto International Film Festival. The 17-minute, mildly NSFW Noah is unlike anything you've seen before in a movie—only because it is exactly like what many of us see on our computers all the time. From the desktop photo of a young couple posing for the camera, we learn that Noah has a girlfriend. Lending the project authenticity is the filmmakers' attention to detail.

5 Future Technology Myths" The flying car has been prophesied for decades. It's one of the holy grails of the futuristic, utopian society, where everyone gets to zip around through the air and land easily, quietly and safely wherever he or she wants. You've probably seen videos of flying-car prototypes, taking off from the ground, hovering and possibly crashing.

Being someone else: How virtual reality is allowing men and women to swap bodies It’s disorienting to look in the mirror and see yourself as another gender. I’m wearing my Oculus Rift development kit, and the virtual reality hardware gives me the illusion of being in a comfortable room in an Italian villa. There is a mirror in the room, and in it I don’t see myself, but a woman. My brain doesn’t quite know what to do with this information. I move my head, and she moves her head. The illusion of being myself, but in the body of a woman instead of a man, makes me dizzy.

Will we ever have love affairs with video game characters? In Spike Jonze’s new movie Her, Joaquin Phoenix is an introverted writer on the verge of divorce who falls in love with his computer’s intelligent operating system. Exactly how far-fetched or credible you think that is probably depends on how invested you are in technology. It was after all, inspired by the real-life web application Cleverbot, which lets visitors engage in conversations with an AI program; and in a lot of ways the movie is a study of our growing reliance on devices as mediators in our social lives and love affairs. From Siri to Tinder, our smartphones and tablets are simultaneously humansing themselves while mechanising our relationships with other humans. 5 Futuristic Trends That Will Shape Business And Culture Today Trend-spotting shop Sparks & Honey has given us ideas to watch in health care, jobs we might be doing in 2025, and the future of relationships. Here, the shop takes a deep-dive into the zeitgeist to identify cultural trends. They're themes that could affect business, and therefore how we live, in the next year or two. Pranking is increasingly common. Some examples: a Coloradan sushi restaurant claiming (falsely) to have a cannabis pairing menu; artisanal plunger parodying high-end household tools; Amazon's ridiculous (though highly successful) drone roll-out.

Inforg Inforgs are informationally embodied organisms, entities made up of information, that exist in the infosphere. These informationally embodied organisms are also called natural agents. Description[edit] LivesOn says death is no excuse to stop tweeting Just in case the zombie apocalypse makes the scenario viable, post-mortem, would you like your inert corpse to be propped up in front of a keyboard so you can keep tweeting? Happily, things don't have to get fetid. To enable a continuous warbling in spite of the hindrance of rigor mortis, we will soon have LivesOn - a service that promises that after your heart stops beating, you can keep tweeting. According to The Telegraph's Theo Merz - one of only about 20 lucky stiffs who got in on the trial - the tester version of LivesOn was made available during the week of 12 August, ahead of a public roll-out scheduled for September. Now, Merz is getting to put the service's algorithms through its paces as it tries to mirror his twitter style. The results are pleasingly and, aptly, brain-dead.

Darpa Turns Oculus Into a Weapon for Cyberwar A Darpa contractor showing off the Oculus Rift cyberwar simulation at the Pentagon’s Darpa Demo Day. Photo: Andy Greenberg/WIRED For the last two years, Darpa has been working to make waging cyberwar as easy as playing a video game. Now, like so many other games, it’s about to get a lot more in-your-face. At the Pentagon Wednesday, the armed forces’ far-out research branch known as the Defense Advanced Research Projects Agency showed off its latest demos for Plan X, a long-gestating software platform designed to unify digital attack and defense tools into a single, easy-to-use interface for American military hackers.