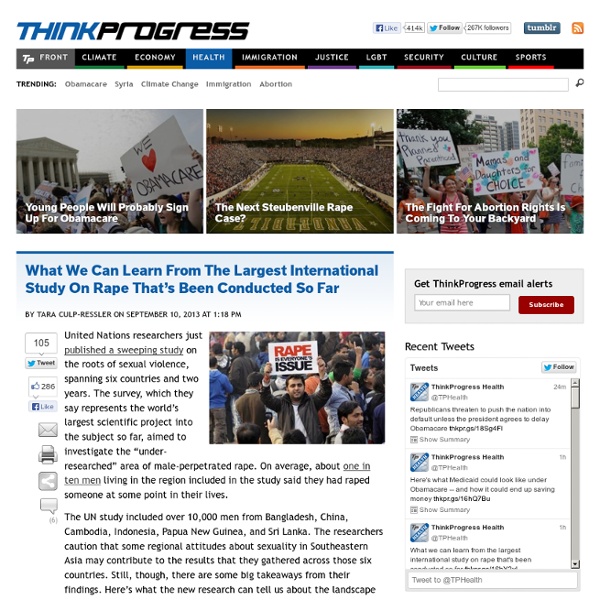 By Tara Culp-Ressler "What We Can Learn From The Largest International Study On Rape That’s Been Conducted So Far" The UN study surveyed over 10,000 men from Bangladesh, China, Cambodia, Indonesia, Papua New Guinea, and Sri Lanka. The researchers caution that some regional attitudes about sexuality in Southeastern Asia may contribute to the results that they gathered across those six countries. Many people have the wrong idea about what “rape” actually is. Rape occurs within marriages, too. Repeat offenses are very high among rapists. Unhealthy attitudes about sexuality take root at a young age. Men rape because they have been taught that they have a right to claim women’s bodies. Rape typically goes unpunished in Southeast Asia. “It’s clear violence against women is far more widespread in the general population than we thought,” Rachel Jewkes, a member of South Africa’s Medical Research Council and the leader of the new study, said in a statement about her results. Related:  Research Resources • Feminism

The Language of Dude Feminism « The sort of language used to assert men’s dominance over women has a pretty recognizable pattern across the cultural landscape. Men, we are told, are in charge of things because they have something women (supposedly) lack: physical strength, honor, higher cognitive facilities, or the mystique of the male organ itself. Women, sadly “lacking” these qualities, need to be “protected” from the all-consuming lusts of strange men. This can be spun as noble chivalry, brutal domination, or a playful battle of the sexes, but at the root it’s the same: women are denied the freedoms that men take as a God-given right, assigned subordinate status, and coerced into performative gender roles. In this dialectic, men’s protective abilities and ravaging urges come from the same place and are both aimed squarely at women. They are, by many metrics, successful, and have gotten institutions long silent on the rights of women to speak up. Moreover, the bar for male allies has been set tremendously low.

Yes, Rape Culture Is Real, And Here's What It Looks Like Yes, rape culture is real, and if you aren't sure what it looks like, a hashtag that was trending Tuesday afternoon provides plenty of examples. All of it started with writer Zerlina Maxwell, according to Feministing: Maxwell was reacting to recent op-eds arguing that there is no such thing as rape culture. One example by the American Enterprise Institute's Caroline Kitchens suggested at Time the real problem isn't the unprecedented wave of women coming forward to say colleges mishandled their sexual assaults, it was men being falsely accused of rape and subsequently expelled. But Kitchens' column was prompted by the input from the Rape Abuse & Incest National Network to the White House task force on college sexual assault. Maxwell, who has spoken about her own assault in the past, was one such woman who strongly disagreed with RAINN and Kitchens:

Rape Culture | Women's Center What is the “Rape Culture?” Rape Culture is an environment in which rape is prevalent and in which sexual violence against women is normalized and excused in the media and popular culture. Rape culture is perpetuated through the use of misogynistic language, the objectification of women’s bodies, and the glamorization of sexual violence, thereby creating a society that disregards women’s rights and safety. Rape Culture affects every woman. Examples of Rape Culture: Blaming the victim (“She asked for it!”) How can men and women combat Rape Culture?

Nerds and Male Privilege (definitely worth a... Rape Culture Is Real “You were drinking, what did you expect?” Those were the first words that I heard when I went to someone I trusted for support after my roommate’s boyfriend raped me eight years ago. When I came forward to report what happened, instead of support, many well-meaning people close to me asked me questions about what I was wearing, if I had done something to cause the assault, or if I had been drinking. These questions about my choices the night of my assault — as opposed to the choices made by my rapist — were in some ways as painful as the violent act itself. Last week, in an essay here at Time, Caroline Kitchens wrote that rape culture as a theory over-hyped by “hysterical” feminists. Kitchens goes on to downplay the problem of sexual violence saying, “Though rape is certainly a serious problem, there’s no evidence that it’s considered a cultural norm.” Is 1 in 5 American women surviving rape or attempted rape considered a cultural norm?

Rape and Sexual Assault The Bureau of Justice Statistics (BJS) has initiated two projects to identify, develop and test the best methods for collecting self-report data on rape and sexual assault. In June 2011, BJS charged an expert panel from the National Research Council's Committee on National Statistics (CNSTAT) to examine conceptual and methodological issues surrounding survey statistics on rape and sexual assault and to recommend to BJS the best methods for obtaining such statistics on an ongoing basis. In September 2011, BJS made a competitive award to Westat, Inc. to develop and test two different survey designs for collecting self-report data on rape and sexual assault. One design is to be an optimal design identified by the CNSTAT panel and the other will be similar to designs used in the public health approach for measuring rape and sexual assault. Estimates from these two designs will be compared to data from the National Crime Victimization Survey (NCVS).

Boy Or Girl? 4-Month-Old Being Raised Genderless | Babys First Year Blog Is gender really THAT important? The minute you announce your child’s sex you’re bombarded with an endless parade of gender-specific clothing and toys. This blue and pink extravaganza is something I’ve always struggled with. I don’t want my daughter conditioned to be a girly-girl just as I don’t want my son to think that he has to be an athlete. That’s why I find one Canadian couple’s decision to raise their child genderless fascinating. Storm is 4-months-old. It began as a offhand remark. “It became so compelling it was almost like, How could we not?” The only people who know are Storm’s two brothers, Jazz, 5, and Kio, 2, and a couple of family friends including the midwives who delivered Storm. “If you really want to get to know someone, you don’t ask what’s between their legs,” Witterick says. Family and friends support the the decision but struggle with how to explain the gender-free baby to others. So what prompted the Stocker’s unusual decision? A valid point. What do you think?

Geena Davis Institute on Gender in Media Founder and Chair Geena Davis Academy Award winner Geena Davis is one of Hollywood’s most respected actors, appearing in several roles that became cultural landmarks. Earning the 2006 Golden Globe Award for Best Performance by an Actress in a Television Series – Drama, Davis broke ground in her portrayal of the first female President of the United States in ABC’s hit show “Commander in Chief.” In 1989, Davis received the Academy Award for Best Supporting Actress for her role as the offbeat dog trainer Muriel Pritchett in Lawrence Kasdan’s “The Accidental Tourist.” She was again nominated for an Academy Award and Golden Globe for her performance in Ridley Scott’s “Thelma & Louise,” in which she co-starred with Susan Sarandon. Davis made her feature film debut starring opposite Dustin Hoffman in “Tootsie.” Davis was appointed Special Envoy for Women and Girls in ICT for the UN's International Telecommunication Union (ITU). Chief Executive Officer Madeline Di Nonno Fiscal Sponsor Mount St. Ms.