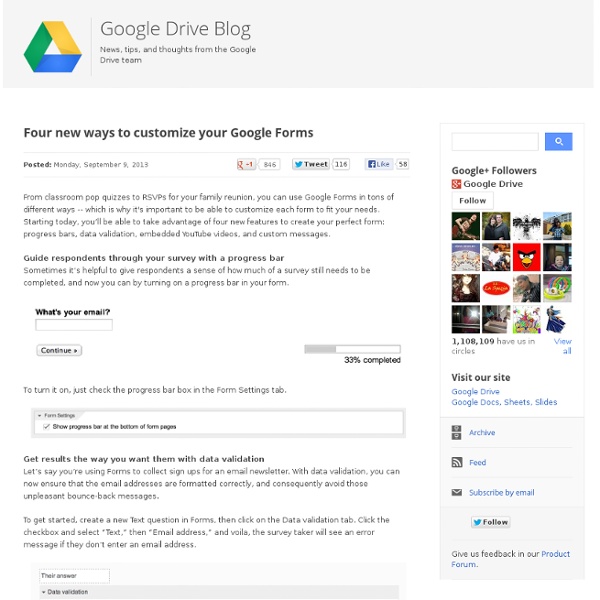 From classroom pop quizzes to RSVPs for your family reunion, you can use Google Forms in tons of different ways -- which is why it's important to be able to customize each form to fit your needs. Starting today, you’ll be able to take advantage of four new features to create your perfect form: progress bars, data validation, embedded YouTube videos, and custom messages. Guide respondents through your survey with a progress bar Sometimes it’s helpful to give respondents a sense of how much of a survey still needs to be completed, and now you can by turning on a progress bar in your form. To turn it on, just check the progress bar box in the Form Settings tab. Get results the way you want them with data validation Let’s say you’re using Forms to collect sign ups for an email newsletter. To get started, create a new Text question in Forms, then click on the Data validation tab. You can also set up data validation for maximum character count, numbers, zip codes, and more. Related:  Chromebooks • Google

Pocket brings its bookmarking and distraction-free ‘read it later’ service to Windows and Chrome OS 5 September '13, 06:31pm Follow Pocket, the handy tool for saving stand-out content across the Web and then reading, watching or looking at it later on another device, has launched a new desktop app for Windows and Chrome OS users. The app is built on Google’s new Chrome Apps platform and offers a similar full-screen experience to that found on Pocket’s Mac incarnation. Upon launching the app and logging in to their existing account, users should therefore see all of their previously bookmarked content ready and waiting. ➤ Pocket (blog post) Top Image Credit: Garry Jenkin

Google+ Activity Guide Although I use the internet from the very first day of public availability in Germany (early 90s) I never joined and engaged in any social network until April 2013. The reason was that my blog had less readers and I hoped to increase the number by sharing articles on different networks. 6 months is not a long time to make the necessary experiences and so I think I’m still a newbie to social networking. I made some faults followed by an intense discussion with Andrew Harasewych (owner of the community ‘Social Media Strategy’) on Google+. Our discussion (near to a fight thankfully with words) and a more conscious perception of what’s going on in communities convinced me (not in all points) to accept the rules. Here is the article which brought Andrew into the arena when posting it to the community ‘Social Media Strategy’. About communities Some general information … According to analysts we can divide people with an account on a social network into three groups: The main faults … The guide …

Google’s strategy to take over computing continues: Chrome apps “For your desktop” On the official 5th birthday of Google’s Chrome browser, Google introduced Chrome apps for Windows desktop users. The new “For your desktop” section of the Chrome Web Store launched on Thursday and offers applications that run outside of the browser as well as offline on Windows computers that have the Chrome browser installed. Support for Mac and Linux is in the works. If you’ve been following our Chrome coverage — or listening to our weekly Chrome Show podcast — this shouldn’t surprise. What appears to many to be just a browser is actually a framework for applications built both on web technologies and native programming languages. And folks like me who use a Chromebook have already been using these types of apps. So what can these apps do? That’s just one example. That last bullet is one we’ve been pointing out over the past several months.

Chrome to make search-by-image easier | Business Tech Google updated the beta versions of its Chrome browser on Thursday with new features that push the envelope just a bit further. Chrome 30 beta for desktops takes a stab at making image lookups on Google easier. Right-click on any photo embedded in a Web page, and you'll see an option to "Search Google for this image." Click it and a new tab will open with search results for that image. Also in desktop Chrome are several new application programming interfaces (APIs) for Chrome Web apps, or Chrome Packaged Apps. Because packaged apps are a way of building sites into native-style apps, and can be coded with basic HTML5, CSS, and JavaScript, their development is well worth keeping an eye on. Chrome 30 beta for Android adds in a long-requested feature: gesture support. You can swipe horizontally across the tab bar to switch tabs; swipe down from the toolbar to open the tab switcher; and swipe down from the menu to open it and select an item without having to take your finger off the screen.

100 Email Hacks It’s hard to believe that in 1998 when the movie “You’ve Got Mail” came out, people actually looked forward to opening their inbox. Back then “Inbox Zero” was an insult (“You have no friends, Inbox Zero-boy”). Now it’s considered a mythical utopia, a place where only a select few can ever hope to visit, and only very briefly. At SaneBox, we’ve done lots of research and thinking on ways to get better at email, and compiled this list of 100 hacks (i.e. tricks, tips, apps, methods) which will let you get to Inbox Zero every day. Better yet, we’ve asked some of our friends, some of whom get even more email than you (VCs, journalists etc) to share their personal tips. We promise that after reading this book (some might call it a pamphlet), you’ll be able to go back in time, to 1998, when you wished you got more email. The 3 Email Commandments You’re in denial.Get out of it Email is like Tetris. Don't let email be your # 1 priority Email is your to-do list that other people can write on.

jpeterson7384 : Welcome to #ChromebookU! Really... 16 secrets of Google Drive Google Drive—formerly Google Docs—has come quite a way in nearly a decade of existence. Originally launched as Writely, a startup’s clever collaborative word processor, Google quickly acquired the app, changed the name to Google Docs, and released it as a new way to help people work together more efficiently using little more than a browser. Google changed the name again to Google Drive in April 2012, reflecting the ever-expanding goals and capabilities of the suite. Google Drive’s many and varied capabilities—from chat with collaborators in a document to the ability to automate your entire Drive—can sometime be surprising. 1. One of Google Drive’s best features is its ability to let you collaborate with other people on a document in real time. 2. If you use Google Drive, it’s probably a safe bet you also use Gmail. 3. You can think of this feature as “Google does Dropbox.” 4. If you use Google Chrome ( 5. 6. 7. Want to whip up some holiday gifts? 8. 9. 10. 11. 12. 13. 14. 15. 16.

Google To Launch Play Textbooks In August, Partners With 5 Major Publishing Houses At its Android and Chrome event in San Francisco today, Google announced that it is bringing textbooks to the Google Play store so students will be able to purchase and rent their textbooks for their Android devices and for reading on the web. The company has partnered with five major textbook publishers to launch this service. These partners are Pearson, Wiley, Macmillian Higher Education, McGraw-Hill and Cengage Learning. Google says it will have a “comprehensive selection” of textbooks from these publishers in the store that will cover subjects like law, math and accounting, but it did not announce exact numbers. The service will launch in August. While Google focused on the fact that students can rent their textbooks on Google Play, though, it did not announce any prices yet. One thing that’s also not clear is how publishers will author books for this service and how much interactivity there will be.

20 Tips for More Efficient Google Searches For millions of people Google is an indispensable search tool that they use every day, in all facets of their lives. From work or school, research, to looking up movies and celebrities to news and gossip, Google is the go-to search engine. But instead of just typing in a phrase and wading through page after page of results, there are a number of ways to make your searches more efficient. Some of these are obvious ones, that you probably know about. But others are lesser-known, and others are known but not often used. Either/or Google normally searches for pages that contain all the words you type in the search box, but if you want pages that have one term or another (or both), use the OR operator — or use the “|” symbol (pipe symbol) to save you a keystroke. For more on Google’s search syntax, see this guide, and this one.

Chrome Toolbox « Trails Optional There is an explosion of school districts in Alberta, including my own district, Northern Gateway Public Schools, who are using the Google Apps for Education suite of tools. With these tools comes a login for the Google Chrome browser. The Google Chrome browser has a multitude of apps and extensions that can be installed to make the internet a more accessible and productive space. Chrome Toolbox is a site profiling Chrome apps and extensions to support learning needs of students. The Chrome browser, with an individual gmail or Google apps login, can be highly personalized and customized. This resource appeals to me because it empowers the individual. It is organized in several ways. Each tool is given an editor’s rating which assesses the functionality and ease of use. the tools are linked to the Chrome web store for instant installation. The site was developed by John Calvert and Mark Surabian as part of a PHD program at Pace University.