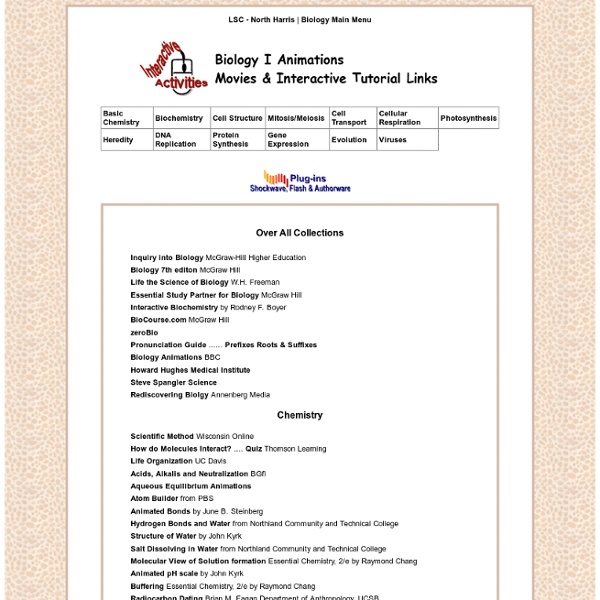 Ed for All 1100. Introductory BiologyThis course features lectures by Professor Graham Walker, a Howard Hughes Medical Institute (HHMI) professor and director of the HHMI Education group at MIT, and Professor Sallie W. Chisholm, Lee and Geraldine Martin Professor of Environmental Studies and co-director of the MIT Earth Systems Initiative. The course covers the fundamental principles of biochemistry, genetics, molecular biology, and cell biology. Biological function at the molecular level is particularly emphasized and covers the structure and regulation of genes, as well as, the structure and synthesis of proteins, how these molecules are integrated into cells, and how these cells are integrated into multicellular systems and organisms. 1110. 1120. 1200. 1650. 1850. 2110. (Prof. 2120.

Infectious diseases: pathogens There are a number of interactive features in this e-source: A glossary of terms: any word with a glossary entry is highlighted like this. Clicking on the <acronym title='Glossary Item'>highlighted</acronym> word will open a new window with a definition of the word.Quick questions: at the end of a page/section, there is a set of quick questions to test your understanding of the scientific ideas.Animations: most of the animations can be expanded to full screen size, ideal for showing on an interactive whiteboard. The animations will play all the way through or can be viewed one section at a time.Downloads: Teachers can download individual diagrams, animations and other content from the Resource Library area of the website. Terms and Conditions apply. If you are printing from an Internet Explorer (IE) browser, please go to 'print preview' and adjust the preferred print zoom level to 85% .

Bioman Biology: The Fun Place to Learn Biology! Man with 'Walking Corpse Syndrome' believes he is dead Photo: Getty A patient has written a disturbing account of life with a condition that makes him think he is dead - and how he spent his days in graveyards as it was "the closest I could get to death". The British man, identified only as Graham, woke up nine years ago utterly convinced that he was no longer alive, even though he was still breathing. Doctors diagnosed him with Cotard’s syndrome, which is also known as "walking corpse syndrome" because it makes people think they have turned into zombies. Graham did not believe them, however, and insisted that his brain was dead. Advertisement The unusual condition emerged after Graham, who suffered from severe depression, tried to commit suicide. Eight months later, he told doctors that his brain had died or was, at best, missing. He lost interest in smoking, stopped speaking and refused to eat as there was "no point because I was dead". At the time, Graham was being looked after by his family because his illness had got so bad. Telegraph, London

NABT Instructional Resources Instructional Materials and Resources AAI Middle & High School Teaching Materials Curriculum developed in the John H. Wallace Summer Research Fellowship Program. A Miniature Guide For Students and Faculty To Scientific Thinking This miniature guide consists of the essence of scientific thinking concepts and tools. It can be used as a supplement to any science textbook, for any science class. The essence of scientific thinking concepts and tools, it focuses on the intellectual skills inherent in the well cultivated scientific thinker. Access Excellence Access Excellence is a national educational program that provides high school biology teachers access to their colleagues, scientists, and critical sources of new scientific information via the Information Highway. APSnet Education Center A new and growing website that presents information on plant health and plant diseases. Biology Lessons for Prospective and Practicing Teachers This site contains biology lessons and teachers' guides.

Woman found functioning without a cerebellum in her brain Doctors have discovered that somehow, a woman living in China has reached the age of 24 while missing a large part of her brain. They say this is evidence of how incredibly adaptable our brains can be. Images: Left: Feng Yu et al. Right: decade3d/Shutterstock When a woman checked herself into the PLA General Hospital in China's Shandong Province, she reported symptoms of dizziness and nausea. She’d had a shaky walk for most of her life, and unlike most people, who learn to walk when they’re very young infants, she was only able to master this skill at seven years old. According to Helen Thomson at New Scientist, once the doctors performed a CAT scan - which combines information from several X-rays to produce a comprehensive image of structures inside the brain - the source problem was immediately made clear. The cerebellum makes up 10 percent of the brain’s total volume, but contains 50 percent of its neurons.

Wisc-Online.com 4 Medical Misunderstandings With Horrific Consequences #2. Cure for Deadly Skin Disease Is Found, No One Cares View Stock/View Stock/Getty Images In the early 20th century, a terrible disease tore through the southern parts of the United States like the disasters in an usually slow-acting Roland Emmerich movie. George Doyle/Stockbyte/Getty"I know, sweetie. Nearby spectators realized Goldberger was right, hoisted the man up on their shoulders, and paraded him around America. The Horrible Consequences Wait! Goldberger tried valiantly to prove his case. Via Wikipedia"Joseph Goldberger. It wasn't until 1937 that the exact bad guy behind pellagra was discovered: a deficiency of the nutrient niacin, also known as Vitamin B3. #1. Ana Blazic/iStock/Getty Images Some time ago, a bunch of researchers were studying the response of newborn babies to pain stimuli, probably because the researchers were never loved as children. Jochen Sand/Digital Vision/Getty Images"Meh, this guy's brain doesn't look too sharp either. Wait, what?

The Biology Project Analysis of a Toxic Death About 8:15 in the evening on February 19, 1994, paramedics wheeled a young woman into the emergency room of General Hospital in the southern California city of Riverside. They shot through two sets of double glass doors, veered to their left, and parked her in a small curtained space marked trauma room one. The woman, clad in shorts and a T-shirt, was awake, but she responded to questions with only brief and sometimes incoherent utterances. The medical staff hovering over Ramirez injected her with a host of fast-acting drugs that were part of the standard protocol for her condition: Valium, Versed, and Ativan to sedate her, and agents such as lidocaine and Bretylium to quell her aberrant heartbeat. To obtain blood for analysis, a registered nurse named Susan Kane swabbed Ramirez’s right arm with rubbing alcohol, inserted a catheter, and attached a syringe. Kane turned toward the door of the trauma room and swayed. Ignoring the red herrings, Andresen found a few interesting anomalies.

HHMI BioInteractive - Virtual Labs BioInteractive’s virtual labs have won several awards, including top honors in the Pirelli INTERNETional Award competition, which recognizes the best multimedia products designed to use the Internet to educate about science and technology. Designed in close consultation with educators and scientists, these virtual labs are fully interactive biomedical laboratory simulations and provide students with skills and techniques used in scientific research. BioInteractive’s series of virtual labs allows students to examine heart patients, analyze DNA sequences, probe the nervous system of a leech, use human antibodies to diagnose disease, and measure physical traits of stickleback fish and anole lizards to examine key concepts in evolution. The labs can be accessed by clicking the icons on the right-hand side of the page.

5 Nightmares You Don't Know Until You're Diabetic Hey, remember when everybody was freaking out about Ebola, because of an outbreak that killed more than 10,000 people? Well, diabetes kills 1.5 million people a year worldwide, more than 200,000 of them in the U.S. And you're probably never more than a few dozen feet away from someone who has it -- there are 30 million diabetics in the U.S. alone. In other words, for something most people consider too boring to even think about, the scale of the epidemic is mind-boggling. The U.S. alone spends an astonishing quarter of a trillion dollars a year fighting it. We previously debunked the myth that sugar causes diabetes, and when we talked to someone with one variety of the disease, we learned about the parts of the experience you never hear about. #5. Comstock/Stockbyte/Getty Images Our diabetic, Zach, once woke up in the middle of the night starving, his legs feeling near-paralyzed. Victor_69/iStock/Getty ImagesOh, bother. If these episodes sound like bad drug trips gone wrong, well ... #4.