Veneration of Mary in Roman Catholicism 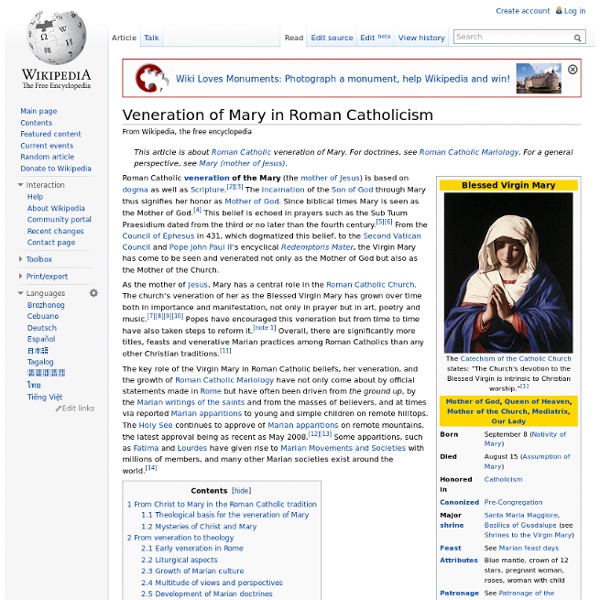 Roman Catholic veneration of Mary, the mother of Jesus, which has grown over time in importance, is manifested not only in prayer but also in the visual arts, poetry and music.[2][3][4][5] Popes have encouraged it, while also taking steps to reform some manifestations of it.[note 1] The Holy See has insisted on the importance of distinguishing "true from false devotion, and authentic doctrine from its deformations by excess or defect".[6] There are significantly more titles, feasts and venerative Marian practices among Roman Catholics than in other Christian traditions.[7] Marian Movements and Societies with millions of members have arisen from belief in events such as Akita, Fatima and Lourdes and other reasons.[12] From Christ to Mary in the Roman Catholic tradition[edit] Theological basis for the veneration of Mary[edit] Mysteries of Christ and Mary[edit] At the centre of this mystery, in the midst of this wonderment of faith, stands Mary. From veneration to theology[edit]

Theotokos An 18th-century Russian icon depicting various types of the Theotokos icons Theotokos (/ˌθiəˈtɒkəs/; Greek: Θεοτόκος, transliterated (Greek) Theotókos, translation (Syriac-Aramaic): ܝܳܠܕܰܬ ܐܰܠܳܗܳܐ‎, transliterated (Syriac): Yoldath Alloho) is the Greek title of Mary, the mother of Jesus used especially in the Eastern Orthodox, Oriental Orthodox, and Eastern Catholic Churches. Its literal English translations include "God-bearer", "Birth-Giver of God" and "the one who gives birth to God." Less literal translations include "Mother of God." The ancient use of this term is emphasised in Churches of the Syriac Tradition who have been using this title in their ancient liturgies for centuries. Roman Catholics and Anglicans use the title "Mother of God" more often than "Theotokos." Etymology and usage[edit] Theotokos is a compound of two Greek words, Θεός God and τόκος parturition, childbirth. Theology[edit] Use in the early Christian Church[edit] Third Ecumenical Council[edit] Hymns[edit]

Heavenly Mother (Mormonism) The Heavenly Mother doctrine is mainly taught by The Church of Jesus Christ of Latter-day Saints (LDS Church),[1] the Restoration Church of Jesus Christ,[2][3] and branches of Mormon fundamentalism, such as the Fundamentalist Church of Jesus Christ of Latter-Day Saints.[citation needed] The doctrine is not generally recognized by other faiths within the broader Latter Day Saint movement, such as the Community of Christ, where trinitarianism is predominant. In the LDS Church, the Heavenly Mother is sung about in church hymns and briefly discussed in church teaching manuals and sermons.[4] In the heavens are parents single? Some early Mormons considered Snow to be a "prophetess".[10] Later, church president Joseph F. The doctrine is also attributed to several other early church leaders. Early leader George Q. Some church leaders have interpreted the term “God” to represent the divinely exalted couple with both a masculine and feminine half. Early 20th-century church leader B.

Triple Goddess (Neopaganism) The Triple Goddess is the subject of much of the writing of Robert Graves, and has been adopted by many neopagans as one of their primary deities. The term triple goddess is infrequently used outside of Neopaganism to instead refer to historical goddess triads and single goddesses of three forms or aspects. In common Neopagan usage the three female figures are frequently described as the Maiden, the Mother, and the Crone, each of which symbolizes both a separate stage in the female life cycle and a phase of the moon, and often rules one of the realms of earth, underworld, and the heavens. These may or may not be perceived as aspects of a greater single divinity. The feminine part of Wicca's duotheistic theological system is sometimes portrayed as a Triple Goddess, her masculine counterpart being the Horned God. The relationship between the neopagan Triple Goddess and ancient religion is disputed, although it is not disputed that triple goddesses were known to ancient religion.

Thelema The word thelema is the English transliteration of the Koine Greek noun θέλημα (pronounced [θélima]) "will", from the verb θέλω "to will, wish, purpose." As Crowley developed the religion, he wrote widely on the topic, producing what are collectively termed the Holy Books of Thelema. He also included ideas from occultism, Yoga and both Eastern and Western mysticism, especially the Qabalah.[8] Historical precedents[edit] The word θέλημα (thelema) is rare in classical Greek, where it "signifies the appetitive will: desire, sometimes even sexual",[9] but it is frequent in the Septuagint.[9] Early Christian writings occasionally use the word to refer to the human will,[10] and even the will of God's opponent, the Devil,[11] but it usually refers to the will of God.[12] One well-known example is in the "Lord's Prayer" (Matthew 6:10), “Your kingdom come. Your will (Θελημα) be done, On earth as it is in heaven.” François Rabelais[edit] Francis Dashwood and the Hellfire Club[edit] True Will[edit]

Phra Mae Thorani Phra Mae Thorani (Thai: พระแม่ธรณี), Mae Phra Thorani (Thai: แม่พระธรณี) or Nang Thorani (นางธรณี), known as Wathondara (ဝသုန္ဒရာ) or Wathondare (ဝသုန္ဒရေ) in Burmese, from Pali Vasudhara[n 1]) are Thai and Lao language names for the Khmer language Preah Thorani (Khmer: ព្រះធរណី ឬ នាងគង្ហីងព្រះធរណី), an earth goddess of the Buddhist mythology of the region. She is also known as Suvathara or Sowathara. Etymology[edit] The word "Thorani" is the Royal Thai General System of Transcription romanization of "dharaṇī", a loanword from Pali and Sanskrit for ground, earth[2] and Phra, from the Pali Vara and the Thai Mae (mother). Iconography and symbology[edit] Painting in a Laotian monastery. "Touching the earth" Calling the earth to witness[edit] Buddhist water libation[edit] Photograph of a libation ceremony in 1900. Modern use as a symbol[edit] Phra Mae Thorani is featured in the logo of: Mae Thorani may also appear as a decorative element of Thai folklore. See also[edit] Po Sop Notes[edit]

Gayatri Illustration by Raja Ravi Verma. In illustrations, the goddess often sits on a lotus flower and appears with five heads and five pairs of hands, representing the incarnations of the goddess as Parvati, Saraswati etc. She is Saraswatī. She is the consort of Brahma Gayatri (Sanskrit: गायत्री, gāyatrī) is the feminine form of gāyatra, a Sanskrit word for a song or a hymn, having a Vedic meter of 3 padas or lines of 8 syllables. Portrayal[edit] Gayatri is typically portrayed as seated on a red lotus, signifying wealth. Having five heads(Mukta, Vidruma, Hema, Neela, Dhavala) with the ten eyes looking in the eight directions plus the earth and sky, and ten arms holding all the weapons of Lord Shiva, Lord Vishnu & Lord Brahma.Accompanied by a white swan, holding a book to portray knowledge in one hand and a cure in the other, as the goddess of Education. Gayatri is in fact the name applied to one of the most well known Vedic hymn consisting of twenty-four syllables. © 2000 - May 8, 2014.

Spider Grandmother Spider Grandmother is an important figure in the mythology, oral traditions and folklore of many Native American cultures. She is creator of the world in Southwestern Native American religions and myths such as that of the Pueblo and Hopi peoples. Although accounts vary, according to mythology she was responsible for the stars in the sky; she took a web she had spun, laced it with dew, threw it into the sky and the dew became the stars. Traditional Navajo/Diné limit the telling of stories involving Spider Grandmother to the winter months, known as "the season when Thunder sleeps", when it is safe to discuss certain dangerous spirits, such as Spider Woman and Northern Thunder (whence the season takes its name), and esoteric topics, such as the Emergence narrative. According to the Zuni, string games were given to them by Grandmother Spider.[3] Traditionally, the stories involving Spider Grandmother are narratives passed down orally from generation to generation. G. See also[edit]

Durga Goddess Durga (Hindustani pronunciation: [ˈd̪uːrɡaː]; Sanskrit: दुर्गा), meaning "the inaccessible"[1] or "the invincible"; durga) is the most popular incarnation of Devi and one of the main forms of the Goddess Shakti in the Hindu pantheon. Durga is the original manifested form of Mother Adi-Parashakti. She is Adi- Parashakti herself. The Devi Gita also known as Parvati Gita declares her to be the greatest Goddess. Origins and development[edit] In the Devi Bhagavata Purana 9th book chapter one, Prakriti khanda Lord Narayana describes Durga as one of the 5 forms of Adi Shakti. Ramprasad Chanda writes the following about the development of Durga from primitive goddess to her current form .[2] "...it is possible to distinguish two different strata – one primitive and the other advanced. Worship[edit] Maa Durga A traditional Durga idol at a pandal in Kolkata. In Kashmir she is worshipped as shaarika (the main temple is in Hari Parbat in Srinagar). Western references[edit] In India[edit] Assam Goa

Mokosh Mokoš (Old Russian Мокошь) is a Slavic goddess mentioned in the Primary Chronicle, protector of women's work and women's destiny.[1] She watches over spinning and weaving, shearing of sheep, and protects women in child birth. Mokosh is the handmaiden of Mat Zemlya. Mokoš was the only female deity whose idol was erected by Vladimir the Great in his Kiev sanctuary along with statues of other major gods (Perun, Hors, Dažbog, Stribog and Simargl). Etymology[edit] According to Max Vasmer, her name is derived from the same root as Slavic words mokry 'wet' and moknut(i) 'get wet'. Myth[edit] Mokosh depicted with male sexual organs. Mokoš was one of the most popular Slavic deities and the great Mother Goddess of East Slavs. Worshipped as late as the 19th century, she was a force of fertility and the ruler of death. Mokoš was later replaced by the cult of the Virgin Mary and St. Mokosh depicted with uplifted arms as creator of celestial bodies. See also[edit] References[edit]

Mat Zemlya Mat Zemlya, also Matka Ziemia, and Mati Syra Zemlya (literally Damp Mother Earth), is the oldest deity in Slavic mythology, her identity later blended into that of Mokosh.[1] She shares characteristics with Indo-Iranian Ardvi Sura Anahita “Humid Mother of the Earth.” In the early Middle Ages, Mati Syra Zemlya was one of the most important deities in the Slavic world. Oaths were made binding by touching the Earth and sins were confessed into a hole in the Earth before death. She was worshipped in her natural form and was not given a human personage or likeness. An example of her importance is seen in this traditional invocation to Matka Ziema, made with a jar of hemp oil: East – "Mother Earth, subdue every evil and unclean being so that he may not cast a spell on us nor do us any harm." See also[edit] Notes[edit] Jump up ^ [Encyclopedia Mythica by John McCannon]