The Future of Design 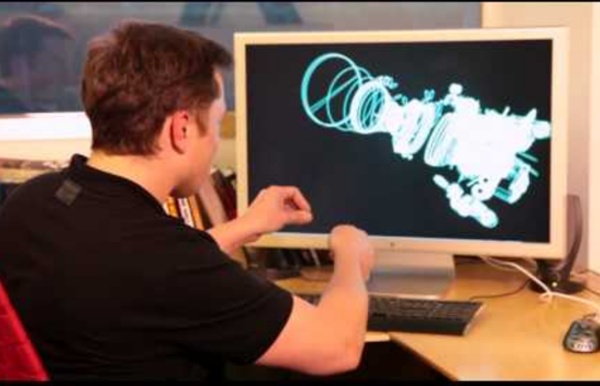 NASA develops 3D printing factory in space News: NASA is developing an orbiting factory that will use 3D printing and robots to fabricate giant structures such as antennas and solar arrays of up to a kilometre in length, as part of its ongoing search for extra-terrestrial life. The US space agency this week announced it was awarding technology firm Tethers Unlimited Inc (TUI) a $500,000 contract to develop the facility. The NASA funding - a second-phase contract that follows an initial contract issued earlier this year - will allow TUI to continue work on its SpiderFab technology, which allows large-scale spacecraft components to be built in space, avoiding the expense of building the components on earth and transporting them into space using rockets. “On-orbit fabrication allows the material for these critical components to be launched in a very compact and durable form, such as spools of fiber or blocks of polymer, so they can fit into a smaller, less expensive launch vehicle.” Via GigaOm. Here's a press release from TUI:

Yitang Zhang Proves 'Landmark' Theorem in Distribution of Prime Numbers | Simons Foundation On April 17, a paper arrived in the inbox of Annals of Mathematics, one of the discipline’s preeminent journals. Written by a mathematician virtually unknown to the experts in his field — a 50-something lecturer at the University of New Hampshire named Yitang Zhang — the paper claimed to have taken a huge step forward in understanding one of mathematics’ oldest problems, the twin primes conjecture. Editors of prominent mathematics journals are used to fielding grandiose claims from obscure authors, but this paper was different. Yitang Zhang (Photo: University of New Hampshire) Just three weeks later — a blink of an eye compared to the usual pace of mathematics journals — Zhang received the referee report on his paper. “The main results are of the first rank,” one of the referees wrote. “Basically, no one knows him,” said Andrew Granville, a number theorist at the Université de Montréal. “The big experts in the field had already tried to make this approach work,” Granville said.

vrKid - Digital Media Bremen vrKid is a vir­tual re­al­ity head­set de­signed es­pe­cially for ba­bies and tod­dlers up to 3 years old. The head­set has the shape of a hippo and its hel­met de­sign se­cures safe use for chil­dren and will pro­tect them when they move around in their phys­i­cal sur­round­ings while us­ing the de­vice. “It’s closely re­lated to what we do in my com­pany.” “If you buy this you’re the kind of par­ent who would rather sit and watch TV than spend time with your child.” The hel­met has a slide-in part for the smart­phone in the front. The size of the hel­met is ad­justable with a turn­ing wheel in the back, tak­ing into ac­count the grow­ing head sizes of ba­bies and tod­dlers. “But do you re­ally think the chil­dren can tell the dif­fer­ence be­tween what they see and the real world?” “I just love hip­pos. All quotes are re­ac­tions to vrKid from the push.con­fer­ence 2016 in Mu­nich.

3D-printed toothbrush ‘perfectly’ cleans your teeth in just six seconds No, it isn’t the misshapen genitalia of the eponymous creature from the Alien movies: It’s a 3D-printed toothbrush that promises to give you “perfectly clean teeth” in just six seconds, with optimum plaque removal and protection of gums. Called the Blizzident, it is essentially a custom-made toothbrush that’s perfectly formed to the shape of your teeth. You go to your dentist, get a 3D scan of your mouth, and then upload the model to the Blizzident website. Rounding out the technical details, the Blizzident costs $300, and you’ll need to replace it every year ($160 for a new one, or $90 to have your current one refurbished with new bristles). The appeal of the Blizzident, of course, beyond having perfectly clean teeth, is the massive time saving. At this point we should note that the makers of Blizzident haven’t yet published any clinical trials for the new toothbrush, but they’re coming “soon.” Now read: 3D printing: a replicator and teleporter in every home

What signs have you noticed that you are getting older? IoT Art: Networked Art | Postscapes You pull out your phone and open a map. A blue dot appears, pinpointing your location. Here you are, the dot says. It’s reassuring, accurate, reliable…mostly. But every now and then, the unity of self and dot falters. GPS, the global positioning system, is a bedrock technology of the Internet of Things, one of the earliest ways of representing real-time data about connected devices and objects. But in the parable of the dancing dot, the limitations of GPS are laid bare. Satellite Lamps, a project of design researchers Einar Sneve Martinussen, Jørn Knutsen, and Timo Arnall at the Oslo School of Architecture and Design in Norway (also the group behind the ImmaterialsWiFi and RFID exploration in 2009), illuminates the changeable nature of GPS signals. In time-lapse videos, some lamps shine bright while others flash fitfully between off and dim. As designers, the trio behind Satellite Lamps want to encourage new ways of thinking about a technology that remains largely invisible.

3D printer by Sask. man gets record crowdsourced cash - Saskatchewan A Saskatchewan man who has developed an affordable 3D printer has attracted worldwide attention and more than $700,000 in crowdsourced funding. Rylan Grayston, 28, from Yorkton, said curiosity fuelled his quest to create a 3D copier that sells for just $100. Other high-tech 3D printers sell for several thousand dollars or more. "I didn't have enough money for a 3D printer that I wanted, so I just started thinking about how can I do this myself?" "All I want to do is invent," Grayston said about the possible riches associated with an affordable 3D printer. How exactly does 3D printing work? Although Grayston has no formal training in engineering or computer science, he has been a tinkerer all his life. Rylan Grayston has developed an affordable 3-D printing machine. Grayston's software converts an object into file data using a sound card on his laptop. Unlike other more expensive devices, Grayston's Peachy Printer has no motors or microprocessors.

The Invisible Hand Illusion Hold your hand up in front of your face. It is patently obvious that the five-fingered thing in front of you is your hand, and the empty space next to it is not. But this ability to recognise your own body is more complicated than it first appears, and can be fooled through a surprisingly simple trick. Henrik Ehrsson from the Karolinska Institute is a master of such illusion. The team’s work was inspired by the classic rubber-hand illusion, devised by two Princeton scientists in the 1990s. It suggested to him that even though we have a lifetime’s experience of owning our bodies, this seemingly ingrained feeling is actually very fragile. Ehrsson’s team have proved the point with one spectacular illusion after another. The team stumbled upon the latest invisible hand illusion by accident. Guterstam started investigating the effect more purposefully. Guterstam also asked the volunteers to close their eyes and point to their right index finger. The illusion has its limits, though.