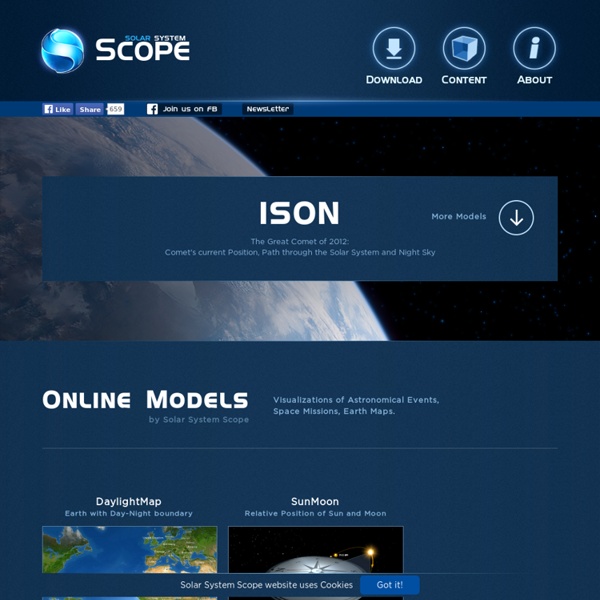 Chunks of Ice May Have Broken Off Comet ISON Although Comet ISON appears to be holding its own against the increasing solar heat as it continues its risky game of “chicken” with the sun, the large mass of ice isn’t getting away unscathed — new observations show evidence for one or more large icy chunks breaking away from ISON’s nucleus. Comet ISON: 5 Things You Should Know Earlier this month, the potential “Comet of the Century” underwent a rapid brightening event, likely caused large fissures of ice suddenly sublimating and blasting gas into space. The resulting increase of gas contained within the comet’s coma and tail reflected more light from the sun, causing it to brighten and become a naked-eye object. Although ISON could be spotted for a few days just before dawn, its light is quickly becoming overwhelmed by sunlight as it approaches perihelion (solar close approach).

Comet ISON Visible To Naked Eye After Outburst Of Activity, Observers Say Get ready for a stellar show. The much-anticipated Comet ISON is now visible to the naked eye according to reports from many observers. Comet ISON — the potential "comet of the century" — has suddenly brightened in an outburst of activity with just two weeks to go before it literally grazes the surface of the sun. In recent months, Comet ISON has repeatedly befuddled forecasters trying to anticipate just how bright it will ultimately become. But earlier this week, the comet's brightening trend again seemed to sputtering and stalling, but more recent observations suggest a sudden and radical upsurge in brightness. [Photos of Comet ISON: A Potentially Great Comet]

Sky view map Sky maps of the current heaven above us with exact situation and positions of the Moon, stars, constellations and planets. The images present the names of the planets, stars, constellations and directions of the world. It is visible on the maps, the current constellation the Moon passes through and groups made by planets, the Moon and the constellations. If the Moon is visible from the current location, it is present on the images with it's current lunar phase and position on the sky. So It Ends for Comet ISON - Comets Well, don't say we didn't warn you. As we hoped all along wouldn't happen, Comet ISON turned into a dud not a dazzle — a speck not a spectacle — a complete, unmitigated flop in terms of any kind of visual display for the world in the December dawn sky. But it sure was exciting while it lasted, and never more so than on November 27th and 28th as it approached and then passed through perihelion while spacecraft watched. Our web traffic spiked through the roof as we posted the ever-changing news to our ISON Updates page.

Leonid Meteor Shower 2013: How To See 'Shooting Stars' This Weekend Get ready to see some "shooting stars" this weekend, skywatchers. The 2013 Leonid meteor shower is expected to be visible from Nov. 16 through Nov. 18. Weather permitting, observers around the world should be able to see the brightest "Leonids" streak across the sky from Saturday night through Sunday morning. The Northern Hemisphere will be treated to the prime show, as it has the best view of the constellation Leo, from which the meteor shower derives its name. Unfortunately, this year's Leonid meteor shower will not be as visible as the show has been in the past years. Beautiful advice from a divorced man after 16 years of marriage A note from James Russell Lingerfelt: Mr. Gerald Rogers’ article stirred a wide variety of feelings among people across the globe. Helped and encouraged thousands, infuriated few. We read letters from women in Malaysia comforting women in England. Men in USA and Singapore spoke healing words to men in Europe and India. A man in Germany responded with some of the deepest insights I’ve read in years.

best of instagram Archives - BOOOOOOOM! It’s been awhile since I did a Best of Instagram post! Once again I tried to find photographers with smaller followings. Everyone here has less than 1000 followers with the exception of Pavielle. Caitlyn posted a link to her Instagram in the Week 16 Post and I was surprised to find she only has 60 followers (let’s change that!). Searching for New Earths It took humans thousands of years to explore our own planet and centuries to comprehend our neighboring planets, but nowadays new worlds are being discovered every week. To date, astronomers have identified more than 370 “exoplanets,” worlds orbiting stars other than the sun. Many are so strange as to confirm the biologist J. B. S. Haldane’s famous remark that “the universe is not only queerer than we suppose, but queerer than we can suppose.”

LIVE REAL TIME SATELLITE TRACKING AND PREDICTIONS: GOCE FRANCE MANEUVERS INTEL SATELLITE TO AVOID DEAD WEATHER SPACECRAFT - One of four French electronic-intelligence satellites flying in formation in low Earth orbit was forced to perform a collision-avoidance maneuver after U.S. and French space-tracking radars determined that it was on a collision course with a large piece of orbital debris, the French air force said. The satellite that had to be moved is one of four identical 120-kilogram Elisa demonstrator satellites launched into a 694-kilometer low Earth orbit in December 2011. With both French naval and German ground-based precision space-surveillance radars out of service for several months for maintenance, the French military deployed two of its own, less-precise ground radars, located in Sommepy in northeast France and Solenzara on the island of Corsica in the Mediterranean, to track what the French air force said was a dead satellite.

electric sheep Electric Sheep is a collaborative abstract artwork founded by Scott Draves. It's run by thousands of people all over the world, and can be installed on any ordinary PC, Mac, Android, or iPad. When these computers "sleep", the Electric Sheep comes on and the computers communicate with each other by the internet to share the work of creating morphing abstract animations known as "sheep". Anyone watching one of these computers may vote for their favorite animations using the keyboard. The more popular sheep live longer and reproduce according to a genetic algorithm with mutation and cross-over.

"Nomad" Planets More Common Than Thought, May Orbit Black Holes Stars and even black holes likely harbor "rogue," or "nomad," planets that were kicked out of the star systems where they were born, new simulations suggest. At the same time, a separate study suggests nomad planets are much more common than thought. Astronomers used to shrug off notions of rogue planets, also called free-floating planets. Yet in the past few years, indirect observations of these galactic wanderers—combined with detailed supercomputer simulations—have suggested they do exist. A study released Thursday, for instance, hints rogue planets might outnumber the Milky Way's 200 to 400 billion stars by a mind-boggling 100,000 to 1.

Here's All You Need To Know To View Comet ISON This December (ANIMATED INFOGRAPHIC) This new view of Comet C/2012 S1 (ISON) was taken with the TRAPPIST national telescope at ESO's La Silla Observatory on the morning of Friday 15 November 2013. Comet ISON was first spotted in our skies in September 2012, and will make its closest approach to the Sun in late November 2013.<a href=" target="_blank"> Waldemar Skorupa (Kahler Asten, Germany)</a>And anotherThe view from ItalyMaximilian Teodorescu"Taken by Kosmas Gazeas on November 18, 2013 @ University of Athens Observatory, Athens, Greece, remotely controlled from ...Netherlands!"<a href=" target="_blank">Michael Jäger of Ebenwaldhöhe, Austria</a>: "Whatever exploded from the comet's core also created a spectacularly-long tail, more than 16 million kilometers from end to end."<a href=" Kato</a>: "the comet after the outburst on November 14, 2013.

Earth-Size "Lone Wolf" Planets May Host Life Maybe some Earth-size planets were just born to be wild. Across the galaxy, countless "rogue" Earths may have been ejected from their planetary neighborhoods and are now zipping alone through space, previous studies have suggested. Now, new research says some of these worlds may have enough heat to support liquid water—and maybe life—without energy from a star. Dubbed a Steppenwolf planet—since it "would exist like a lone wolf wandering the galactic steppe"—such a world could host a liquid ocean under an insulating layer of water ice and carbon dioxide snow, the study authors say. Hydrothermal vents on the planet's seafloor may infuse the alien ocean with chemical energy sources. On Earth, nutrients from such deep-sea vents support bacteria and other life-forms that can exist without sunlight.