The Search for Basic Emotions 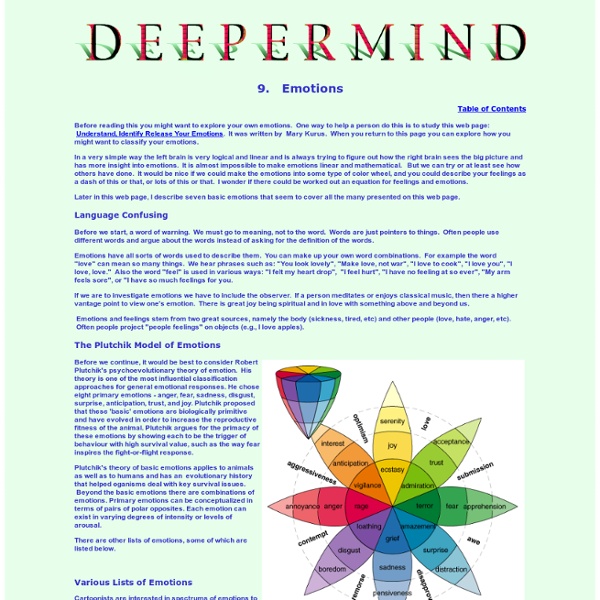 Table of Contents Before reading this you might want to explore your own emotions. One way to help a person do this is to study this web page: Understand, Identify Release Your Emotions. It was written by Mary Kurus. In a very simple way the left brain is very logical and linear and is always trying to figure out how the right brain sees the big picture and has more insight into emotions. Later in this web page, I describe seven basic emotions that seem to cover all the many presented on this web page. Language Confusing Before we start, a word of warning. Emotions have all sorts of words used to describe them. If we are to investigate emotions we have to include the observer. Emotions and feelings stem from two great sources, namely the body (sickness, tired, etc) and other people (love, hate, anger, etc). The Plutchik Model of Emotions Before we continue, it would be best to consider Robert Plutchik's psychoevolutionary theory of emotion. Various Lists of Emotions Hunter B. 1. 1. Related:  The Psychology of Emotions

Emotion classification Emotion classification, the means by which one emotion is distinguished from another, is a contested issue in emotion research and affective science. The classification of emotions has been researched from two fundamental viewpoints: one, that emotions are discrete and fundamentally different constructs; or two, that emotions can be characterized on a dimensional basis in groupings. Emotions as discrete categories[edit] Basicality Debate[edit] Humans' subjective experience is that emotions are clearly recognizable in ourselves and others. On "basic emotion" accounts, activation of an emotion, such as anger, sadness, or fear, is "triggered" by the brain's appraisal of a stimulus or event with respect to the perceiver's goals or survival. On "constructionist" accounts, the emotion a person feels in response to a stimulus or event is "constructed" from more elemental biological and psychological ingredients. Semantically Distinct Emotions[edit] Dimensional models of emotion[edit]

Emotional Competency - Explore the Logic of Passion Natural Ways to Lose Weight Natural Ways to Lose Weight There are many natural ways to lose weight, simply by making small dietary and lifestyle changes. The best part about natural weight loss is that these methods will not only help you to lose weight naturally, but they will also help to keep the weight off, without having to count calories! Switch to a Raw Food Diet The raw food diet is one of the best ways to lose weight naturally, as it is high in fiber. If you have been on a conventional diet for your whole life, then raw foods may not be very tasty for you. Vegetables. Dark green leaf vegetables are the best, as they contain the most calcium, chlorophyll and other vital nutrients. The best way to eat your vegetables is to eat them raw, as they contain all the natural enzymes so that your body can create its own nutrients. Asparagus, broccoli, carrots and eggplant are all excellent when lightly steamed. Smoothies are a healthy and tasty way to add in more leaf vegetables to your diet. Fruits. Avocados.

Emotions – How To Understand, Identify and Release Your Emotions Home -> Free Articles - Emotions - How To Understand, Identify Release Your Emotions. · What Are Emotions – Feelings? Different people define emotions in different ways. Some make a distinction between emotions and feelings saying that a feeling is the response part of the emotion and that an emotion includes the situation or experience, the interpretation, the perception, and the response or feeling related to the experience of a particular situation. John D. Dr. · Why Bother With Emotions: Emotions control your thinking, behavior and actions. · Belief Systems Underlying much of our behavior is what is called a belief system. Your belief system affects your perceptions or how you interpret what you see, hear and feel. It takes a lot of work to look at yourself and identify the beliefs that are affecting your life in a negative manner. · Other People, Places, and Things Cannot Change How You Feel The only person who can change what you feel is you. · Physical Effects of Emotions

Top 10 Psychological Diseases digg Psychological illness may vary from widely known irrational fears to post traumatic stress syndrome. Discussed herein are top ten psychological illnesses that affect millions of people globally in the present times. 1. Obsessive Compulsive Disorder Obsessive compulsive disorder also referred to as OCD is psychological illness that is characterized by imaginations that creates stress or nervousness, by redundant behaviors or an amalgamation of such imaginations which are obsession and actions also known as compulsions. 2. Bipolar disorder is also referred to as bipolar affective disorder in medical quarters. 3. Social anxiety disorder is commonly known as social phobia or social anxiety. 4. Clinical depression also known as severe depression disorder or Unipolar depression is a serious type of psychological disease. 5. A person is said to suffer from schizophrenia when there are irregularities in the discernment or expression of the things that are around them.

untitled List of Emotions - Human Emotional Chart This list of human emotions plots the descending spiral of life from full vitality of the energy of life and high consciousness through half-vitality and half-consciousness down to death. This list of emotions chart also enables to both predict and understand human behavior in all manifestations, making possible to predict the behavior of a potential spouse, a business partner, employee or friend - before you commit to a relationship. Numbers assigned to this list of emotions chart are arbitrary to show a relative degree or intensity of perceived emotion of happiness in accordance to available creative power or life's energy to the individual. Happiness encompasses a whole range of emotions from certain energy frequency level (4.0 enthusiasm level in our chart below) and up. - What we call the Happiness Domain. Neuroscientist Richard J. Human Emotions Frequency Scale Of course, there are no "holes" in the emotional scale. The Law of Attraction Emotional Energy - Visible Light Energy

Feelings Understanding Stress: Symptoms, Signs, Causes, and Effects What is stress? The Body’s Stress Response When you perceive a threat, your nervous system responds by releasing a flood of stress hormones, including adrenaline and cortisol. Your heart pounds faster, muscles tighten, blood pressure rises, breath quickens, and your senses become sharper. Stress is a normal physical response to events that make you feel threatened or upset your balance in some way. The stress response is the body’s way of protecting you. The stress response also helps you rise to meet challenges. But beyond a certain point, stress stops being helpful and starts causing major damage to your health, your mood, your productivity, your relationships, and your quality of life. How do you respond to stress? It's important to learn how to recognize when your stress levels are out of control. The signs and symptoms of stress overload can be almost anything. Stress doesn’t always look stressful Foot on the gas – An angry, agitated, or “fight” stress response. How stressed are you?