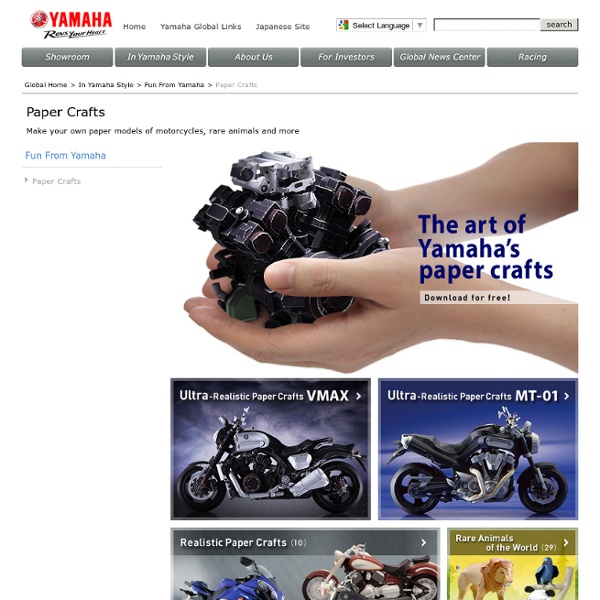 Papercrft Tokyo, Japan - If you’re a fan of the Star Wars series (or at least the first 3 films), and you’ve got an extra 41 hours on your hands, then have we got a project for you young jedi.This beautifully designed replica of an AT-AT was found in Japan by artist Shunichi Makino and is created entirely out of paper. It consists of 6 downloadable pdf files. Hand-held Hubble - Paper Model, intermediate Difficulty: Somewhat difficult Durability: Low Detail: Moderate This intermediate-level paper model is made of cardstock and construction paper. It consists of about 30 pieces and can take approximately four to eight hours to build.

Handmade Flower Pots Once I spent a whole summer making handmade paper. I love the organic texture. Now I've found a way to make pots that look handmade without all of the work. Plus they cost about 9 cents each. How great is that? Carambola Flowers by Carmen Sprung If you’ve been following me on Flickr for a while, you’ve probably seen this picture of Carambola Flowers before – I folded them ages ago! But since my Pro account is going to expire in a few days time (and I don’t feel like upgrading it again), a lot of my old photos won’t be displayed anymore. So I decided it would be a good idea to share the very best of them on my blog! These absolutely beautiful origami flowers were designed by Carmen Sprung and I just love them! Each flower is made from a single sheet of paper, not from a square though, but from a pentagon. I would recommend using fairly thick and strong paper (80-90 gsm) to fold them – Tant origami paper will be just the right choice!

Portal:Origami The Origami Portal Origami (折り紙, origami?) (literally meaning "folding paper") is the art of paper folding. The goal of this art is to create a given result using geometric folds and crease patterns. Origami refers to all types of paper folding, even those of non-Japanese origin. Papercraft Once you download the file, you will need to open the following files with a different program which are all free to download:.pdf files are opened with Adobe Reader 9.pdo files are opened with Pepakura Viewer.zip and .rar files are opened with WinRAR. If a .pdo file asks you for a password, it usually means you have downloaded Pepakura Designer and not Pepakura Viewer, so make sure to get the viewer instead. Here’s a little demonstration on using Pepakura Viewer 3. Pepakura does not work on a MAC. However, if you download VMWare, or WINE, or some PC emulator, you can still get it to work. To build it, cut it out and keep the glue tabs onto the piece.

The 7 Wonders of the Ancient World Did you know it would have been impossible for anyone to see all seven wonders of the ancient world? By the time the last wonder was built (The Colossus at Rhodes) others had already been destroyed. Of the seven only one remains standing today. The oldest wonder and only surviving wonder is the Great Pyramid of Khufu. Many argue now that the list originally compiled by Greek writers in the fifth century BC was a bit short sighted since they did not encompass the whole world but only what the Greeks knew of it. Paper model / Papercraft Paper models, also called card models, "pepakura" or papercraft, are models constructed mainly from sheets of heavy paper, paperboard, card stock, or foam. Details[edit] This may be considered a broad category that contains origami and card modeling.

Free Paper Models of Buildings and Structures Buildings and Structures Free Paper Models Free paper models of buildings from around the world. Castles, Palaces, Churches, Museums, Historical, Houses, Lighthouses, RPG Layouts... Build your own Paper Model Medieval Castle Blarney Castle Paper Model Build a Castle - Simple. Reverse Waterfall Card In a conventional waterfall card you pull a tab to make a set of pictures flip open. I reversed the mechanism to make a push tab. As you push the tab the pictures flip, but the tab appears to stay the same size at every flip, instead of getting longer and longer at the bottom. It's like magic! Paperware In the meantime I created also buildings for Epic Armageddon which can be found here. needed some buildings urgently. While I can cut them from styrofoam quickly thanks to a computerized machine, making the roofs and painting the buildings takes some time.

Make a Puppy Ears card {Craft Camp} Just in case you missed it I have something great going on right now. That’s right… Don’t forget to stop in and enter my Silhouette contest! You could win a Silhouette CAMEO and rhinestone kit! I am excited to be offering 30 days of fun crafts to keep kids active and entertained this summer!