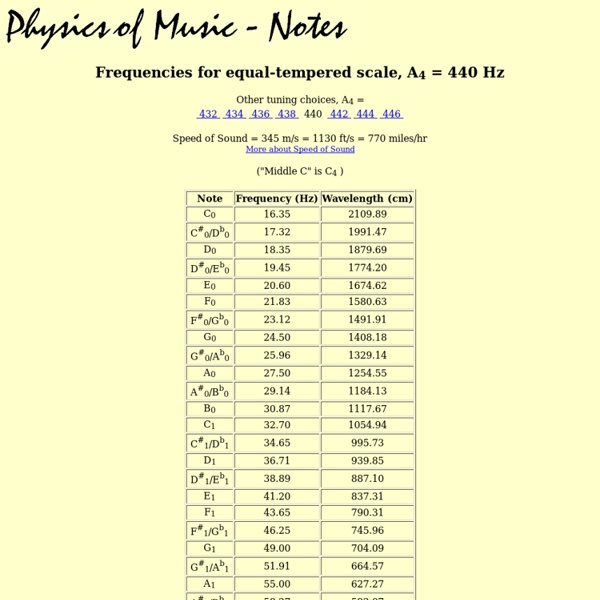 Other tuning choices, A4 = Speed of Sound = 345 m/s = 1130 ft/s = 770 miles/hrMore about Speed of Sound ("Middle C" is C4 ) (To convert lengths in cm to inches, divide by 2.54) More information on the equal tempered scaleEquations used for this table Questions/Comments to: suits@mtu.edu There are no pop-ups or ads of any kind on these pages. To Physics of Music NotesTo MTU Physics HomeCopyright Info

Guitar Theory Resources Where Is Middle C undefined This is one of those questions that can be really confusing for a guitarist learning to read music. Middle " C " on the piano is the note " in the middle " between the Treble and Bass Clefs. In early times the Treble and Bass cleffs were joined, making the Great Stave or Staff, consisting of 11 ledger lines. The middle line was the C ledger line, hence the term middle C. The Great Staff was too large and confusing for reading music, and was divided into two sections, the top 5 ledger lines became the Treble Cleff and the bottom 5 lines became the Bass Cleff. You can look at it two ways, Music written in Treble Cleff for the Guitar is written an octave higher than the actual pitch of the note. Of course this theory doesn't just apply to middle C , it applies to all Guitar music written in the Treble Cleff. Well, what I thought would be easy to explain has made one thing very clear, now I know why I get so many emails asking where middle C is, its just not that simple.

Discrete FET Guitar Preamp J. Donald Tillman 6 May 2001, updated June 2005 Introduction I've been performing experiments with guitar preamps and on-board electronics since, oh, the Nixon adminstration or thereabouts. Sometime around 1990 I designed this preamp circuit, and have been using it mostly unchanged ever since. In 1992 I posted a schematic of the preamp to one of the Usenet groups and the circuit became somewhat popular. The goals of the preamp are: Sounds great. The preamp can also be phantom powered and mounted in a phone plug. Schematic Here is the schematic diagram: FET Preamp Schematic And the parts list: FET Preamp Parts List Notice that some of the details are left to the reader's imagination because there are so many ways to use this preamp. Mount it on-board the guitar, after the pickup selection switch, volume and tone controls. Technical details It's a simple unassuming common source FET stage that looks and performs somewhat like the first 12AX7 stage in a Fender preamp. A note about FETs No. History

Roland GR-500 Thanks to Roland, guitars and synthesizers have had a long working relationship together. The GR-500 is a vintage guitar controlled synthesizer - before there was MIDI too! It was the first synth of this kind that Roland had ever produced, back in 1977. The synth module is controlled by a "highly modified" guitar. Check Roland GR-500 Prices on eBay The link above will take you to a search for this synth to see active listings with more images, specs and information. Related forum topics No related topics found We could not automagically find any related forum topics for this synth, but please browse the forum and look around or consider signing up and posting something yourself! Comments Are you looking to buy or sell a Roland GR-500?

fender outs rock band 3 stratocaster controller with real strings - technabob November 3rd, 2010 by Shane McGlaun I know I’m not the only one who has been jamming to a tune on Rock Band and thought I could probably play the real guitar that good too if it were a game. Squire is a Fender brand and the company is famous for the Stratocaster line of guitars. Squire has a cool new guitar controller for Rock Band 3 that will ship next year. The thing looks just like a real Fender guitar, mostly because it is a real guitar. It has six real strings and frets that you can jam with while playing your favorite game. We are a ways out on this thing with pre-orders set to start in January 2011. Live Crab Vending Machine: Only in Japan. Game Racing Ottoman

Arduino diagram: Inside the Piezo Buzzer Piezo A Piezo is an electronic device that can both be used to play tones and to detect tones. Piezos have polarity. Sometimes it is possible to acquire Piezo elements without a plastic housing, then they will just look like a metallic disc and are easier to use as input sensors. To read a piezo you can just hook it into an analog input, but you need to drain off any voltage with a resistor, or it just builds up. When the Piezo element is used to detect sound, it is a knock sensor. The code example will capture the knock and if it is stronger than a certain threshold, it will send the string "Knock!" Exercise 2-Motor Pulse Wire up a Piezo and a motor Exercise 3-Get Creative You can mount the element on anything (under rugs, floor mat, door, your body, etc.) This one is glued to a larger brass disc for a drum trigger. Hook a piezo up to something, connect with Processing. Build a theremin A therimin is a musical instrument created by Leon Theremin.