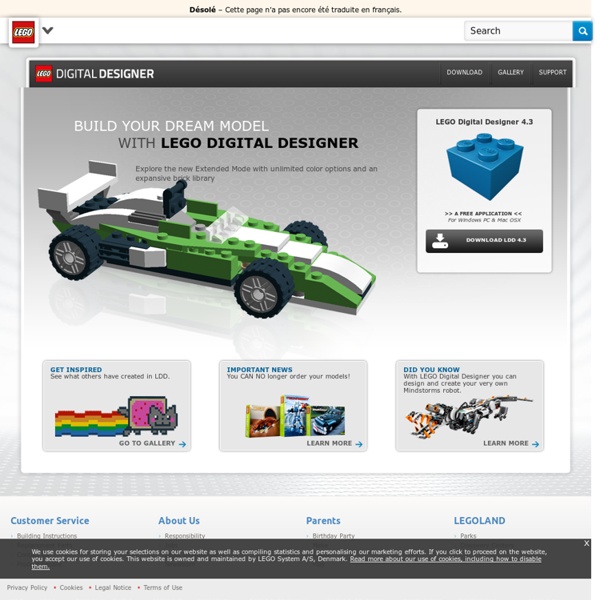 MIT Researchers Use Legos To Solve Real-Life Problems CAMBRIDGE (CBS) – From the blockbuster movie, to the new Legoland Discovery Center opening in Somerville at the end of the month, the old school children’s toy is a modern day hit. Across the river in Cambridge, there is evidence that Legos are also a hit with researchers. It turns out, the brainiest of the brainiacs at MIT are also Legomaniacs. Ira Winder is a researcher and project manager of CityScience at the MIT Media Lab. Digital Designer You CAN NO longer order your models The original Design byMe vision was for a unique customization service, where consumers could design whatever they imagined on their computer, and buy the real model in their own LEGO box. Design byMe attracted several million people each year to build a huge range of amazing creations using the LEGO Digital Designer (LDD) software. Despite this success, the overall Design byMe experience has struggled to live up to the quality standards for a LEGO service. As a result, the LEGO® Design byME service was closed in January 2012.

LeoCAD LeoCAD is a CAD program for creating virtual LEGO models. It has an easy to use interface and currently includes over 6000 different pieces created by the ​LDraw community. If you have any questions, suggestions or comments feel free to send an email to the ​LeoCAD mailing list. LeoCAD for Windows: Simply download the latest version of the LeoCAD installer from the downloads page, run it and follow the installation instructions. LeoCAD for Linux: If LeoCAD is not available from your distribution's package manager you'll need to download the source code and compile your own binary. You'll also need to download and install a PartsLibrary.

29 Incredibly Useful Websites You Wish You Knew Earlier There are so many wonderful websites around, and it is difficult to know each and every one of them. The below list provides some of those websites that I find particularly helpful, even though they are not as famous or as prevalent as some of the big names out there. 1. The bricks that keep building - Features – N by Norwegian There are over 400 billion pieces of Lego in existence. That’s more than 80 interlocking Lego toy parts for every person on the planet. Lego now exists on our iPhones and game consoles; and when the trailer went up for The Lego Movie, released early next year, starring Will Ferrell and Morgan Freeman, six million people saw it in the first week.

Research Institute  "I bough this together with the exo suit which is a superior set to this one from my point ofview but this one is awesome also and I will say why: + there are 3 minifigs (happen to be female) these minifigs look to me like standard female characters already available so not a big "whoa" but OK they are fine ;) + 3 small setups make a room for more creativity and combinations + price is good! Lego and Gender Issues Article from BBC News Magazine Tom De Castella has written for BBC News Magazine a story about Lego’s moves on gender stereotypes. Three new Lego figures – all female scientists – have been unveiled. But why does the toy maker’s portrayal of women provoke such controversy? A paleontologist, an astronomer, a chemist – into the pantheon of children’s toys stride three new Lego characters.

LEGO Foundation LEGO Foundation - Research & Learning - Foundation Research - Cultures of Creativity Eduardo O.E.M.C. Chaves Play and Learning: One Brazilian’s View We human beings, have two basic tasks when we are born: one, immediate and extremely urgent; the other, long term. Energy3D Energy3D is a computer-aided engineering tool for designing, analyzing, and constructing green buildings that utilize renewable energy. Users can quickly sketch up a realistic-looking building and then evaluate its energy performance for any given day and location. Based on computational physics, Energy3D can rapidly generate time graphs (resembling data loggers) and heat maps (resembling infrared cameras) for in-depth analyses. At the end of the design, Energy3D allows users to print it out, cut out the pieces, and use them to assemble a physical scale model. Energy3D has been primarily developed to provide a simulated engineering design environment that supports science and engineering education.

Therapist Encouraging Top Business Executives to Play with Lego An interesting post from Get West London about the use of Lego Serious Play in therapy A Harefield woman is among a new breed of therapists encouraging grown men and women to stop working and start playing – specifically with Lego. Jane Anderson, from Shelley Lane, has been a neuro-linguistic programming practitioner for five years, but over the past 14 months has been concentrating on a new form of therapy for adults which is almost child’s play. Mrs Anderson, 48, uses Lego to help top business executives make positive changes in communication and also during problem-solving for teams and individuals. It is called Lego Serious Play (LSP) and it is sweeping the nation’s boardrooms, with Google and British Airways just two of the big name companies who use the therapy for team building and staff counselling. “We believe that everyone has something unique and valuable to contribute, yet in many meetings, 20 per cent of people speak and 80 per cent listen,” she said.

The Cornish beaches where Lego keeps washing up 20 July 2014Last updated at 20:12 ET By Mario Cacciottolo BBC News Magazine A container filled with millions of Lego pieces fell into the sea off Cornwall in 1997. But instead of remaining at the bottom of the ocean, they are still washing up on Cornish beaches today - offering an insight into the mysterious world of oceans and tides. "Let me see if I can find a cutlass," says Tracey Williams, poking around some large rocks on Perran Sands with a stick.