Pentagon bracing for public dissent over climate and energy shocks 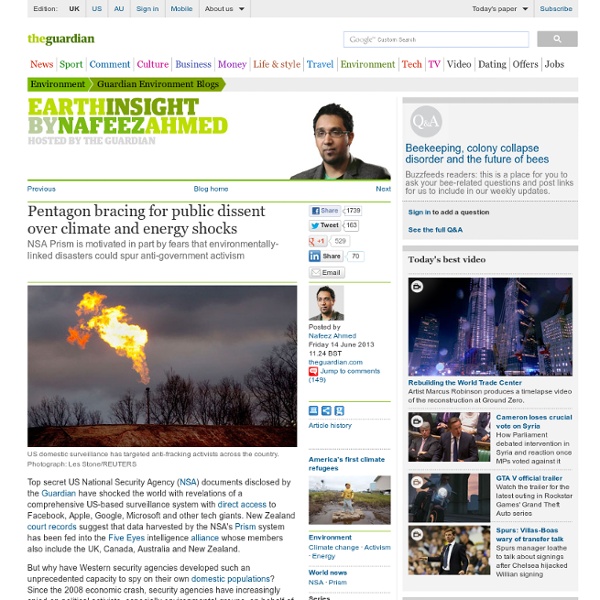 Top secret US National Security Agency (NSA) documents disclosed by the Guardian have shocked the world with revelations of a comprehensive US-based surveillance system with direct access to Facebook, Apple, Google, Microsoft and other tech giants. New Zealand court records suggest that data harvested by the NSA's Prism system has been fed into the Five Eyes intelligence alliance whose members also include the UK, Canada, Australia and New Zealand. But why have Western security agencies developed such an unprecedented capacity to spy on their own domestic populations? Just last month, unilateral changes to US military laws formally granted the Pentagon extraordinary powers to intervene in a domestic "emergency" or "civil disturbance": Other documents show that the "extraordinary emergencies" the Pentagon is worried about include a range of environmental and related disasters. In 2006, the US National Security Strategy warned that: Related:  preparations • Intelligence Services

Meet The "Minerva Research Initiative" - The Pentagon's Preparation For "Mass Civil Breakdown" (Pictured: U.S. Soldiers, with Bravo Company, 1st Combined Arms Battalion, 194th Armored Regiment, 34th Infantry Divison, Minnesota Army National Guard, train in crowd riot control at Fort McCoy. Image Credit U.S. About a month ago we showed photos of the Chinese police engaged in a drill designed to crush a “working class insurrection”, in which the police did precisely what would be required to end a middle class rebellion. Because long before China was practicing counter-riot ops using rubber bullets, all the way back in 2008 the US Department of Defense was conducting studies on the dynamics of civil unrest, and how the US military might best respond. The Guardian which first revealed the details, reports that, “The multi-million dollar programme is designed to develop immediate and long-term “warfighter-relevant insights” for senior officials and decision makers in “the defense policy community,” and to inform policy implemented by “combatant commands.”

Secret Court Ruling Put Tech Companies in Data Bind The judges disagreed. That left Yahoo two choices: Hand over the data or break the law. So Yahoo became part of the ’s secret Internet surveillance program, Prism, according to leaked N.S.A. documents, as did seven other Internet companies. Like almost all the actions of the secret court, which operates under the , the details of its disagreement with Yahoo were never made public beyond a heavily redacted court order, one of the few public documents ever to emerge from the court. But the decision has had lasting repercussions for the dozens of companies that store troves of their users’ personal information and receive these national security requests — it puts them on notice that they need not even try to test their legality. Lawyers who handle national security requests for tech companies say they rarely fight in court, but frequently push back privately by negotiating with the government, even if they ultimately have to comply. But Mr. The company went to court.

Uri Geller psychic spy? The spoon-bender's secret life as a Mossad and CIA agent revealed - Features - Films Geller was at the Sheffield Doc Fest this week for the premiere of Vikram Jayanti’s The Secret Life Of Uri Geller – Psychic Spy?, a new film that offers compelling evidence of his involvement in the shadowy world of espionage. “Uri has a controversial reputation. A lot of people think he is a fraud, a lot of people think he is a trickster and makes things up but at the same time he has a huge following and a history of doing things that nobody can explain,” Jayanti says of his Zelig-like subject. Speaking to The Independent, Geller acknowledged alarm when he first saw Jayanti’s documentary. “I was worried and I am still concerned,” Geller said of the way the documentary outs him as a spy. When he signed up for the doc, the psychic didn’t realise quite how diligently Jayanti would track down his old spy masters. On camera and in interview, Geller still remains coy about his espionage activities. “I tried to execute missions that were positive,” Geller claims.

Where Is the Proof that UN Soldiers are Actively Operating on American Soil? Oh, Right Here... Frank Drover The Daily Sheeple August 17th, 2012 Reader Views: 119,611 As talk of the US government’s police state expansion heats up and the threat of martial law becomes the topic of conversation for many who are concerned about recent legislative actions and Executive branch orders, many Americans remain skeptical that foreign troops have even stepped foot on American sovereign soil. They argue that there’s no way that we’d allow foreigners access to our military, technology, strategies or tactics. Where’s the proof that there are thousands of United Nations soldiers and units in America? It turns out the proof is right here. Not only are foreign troops under the banner of the United Nations stationed within the continental United States, they are and have been actively training, and not just for traditional military engagements. All of us have heard over the years rumors of foreign troops in the USA. Video excerpt of Police State 2000 (full movie here) showing foreign troops in the US:

Lawrence Lessig on Government Spying BILL MOYERS: This week on Moyers & Company… LAWRENCE LESSIG: In a world of terrorism the government's going to be out there trying to protect us. But let's make sure that they're using tools or technology that also protects the privacy side of what they should be protecting. ANNOUNCER: Funding is provided by: Carnegie Corporation of New York, celebrating 100 years of philanthropy, and committed to doing real and permanent good in the world. The Kohlberg Foundation. Independent Production Fund, with support from The Partridge Foundation, a John and Polly Guth Charitable Fund. The Clements Foundation. Park Foundation, dedicated to heightening public awareness of critical issues. The Herb Alpert Foundation, supporting organizations whose mission is to promote compassion and creativity in our society. The Bernard and Audre Rapoport Foundation. The John D. Anne Gumowitz. The Betsy And Jesse Fink Foundation. The HKH Foundation. Barbara G. BILL MOYERS: Welcome. Lawrence Lessig also warned us.

Robert Levinson, Missing American In Iran, Was Working For CIA On Unapproved Assignment WASHINGTON (AP) — In March 2007, retired FBI agent Robert Levinson flew to Kish Island, an Iranian resort awash with tourists, smugglers and organized crime figures. Days later, after an arranged meeting with an admitted killer, he checked out of his hotel, slipped into a taxi and vanished. For years, the U.S. has publicly described him as a private citizen who traveled to the tiny Persian Gulf island on private business. But that was just a cover story. An Associated Press investigation reveals that Levinson was working for the CIA. The CIA was slow to respond to Levinson's disappearance and spent the first several months denying any involvement. Behind closed doors, three veteran analysts were forced out of the agency and seven others were disciplined. But even after the White House, FBI and State Department officials learned of Levinson's CIA ties, the official story remained unchanged. Some in the U.S. government believe he is dead. Their responsibilities don't overlap.

The Great Decoupling: How the West is Engineering its Own Downfall : The Corbett Report Editor’s Note: This is an article from The Corbett Report Subscriber, the weekly e-newsletter for members of corbettreport.com. Please support this website and this work by signing up for a Corbett Report membership today for as little as 100 Japanese Yen ($1 US) per month. CLICK HERE for details. by James Corbettcorbettreport.com April 12, 2014 Reports out of Moscow indicate that Russia is on the verge of signing the “holy grail” of gas deals with China. The deal between Russian state-owned gas firm Gazprom and Beijing would see as much as 38 billion cubic meters of natural gas per year flowing through the first proposed Russia-China pipeline by 2018. Given the fact that Russia, the world’s largest gas producer, and China, the world’s largest gas consumer, are neighbors it would be logical to assume that a gas pipeline between the two countries already exists. There’s the rise of the Shanghai Cooperation Organization. There’s the rise of the BRICS. Filed in: Articles

The Price of the Panopticon We privacy watchers and civil libertarians think this complacent response misses a deeply worrying political shift of vast consequence. While President Obama has conveniently described the costs of what appears to be pervasive surveillance of Americans’ telecommunications connections as “modest encroachments on privacy,” what we are actually witnessing is a sea change in the kinds of things that the government can monitor in the lives of ordinary citizens. The N.S.A. dragnet of “connection data” — who communicates with whom, where, how often and for how long — aims at finding patterns between calls or messages, and between parties with given characteristics, which correlate with increased odds of terrorist activity. The success rate in these operations is a matter of intense speculation, given the authorities’ closemouthed stance on the matter. The question, though, is what comes next? This is true even if the Obama administration’s goals are benign.