How to Read A Book 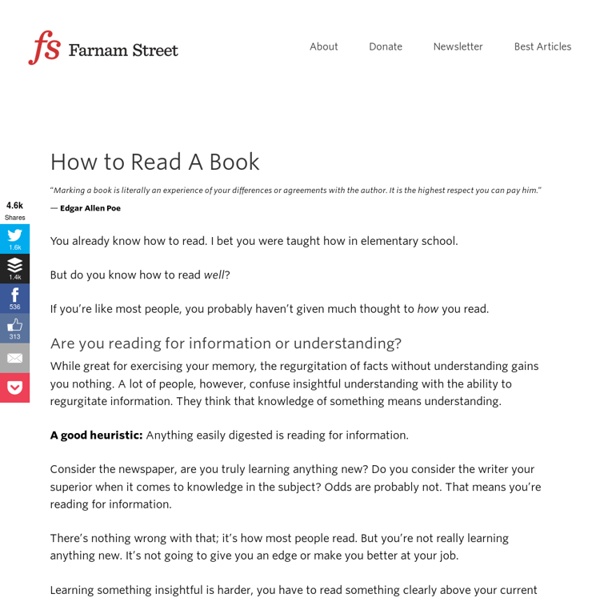 “Marking a book is literally an experience of your differences or agreements with the author. It is the highest respect you can pay him.” — Edgar Allen Poe You already know how to read. I bet you were taught how in elementary school. But do you know how to read well? If you’re like most people, you probably haven’t given much thought to how you read. Are you reading for information or understanding? While great for exercising your memory, the regurgitation of facts without understanding gains you nothing. A good heuristic: Anything easily digested is reading for information. Consider the newspaper, are you truly learning anything new? There’s nothing wrong with that; it’s how most people read. Learning something insightful is harder, you have to read something clearly above your current level. Reading for understanding means narrowing the gap between reader and writer. The four levels of reading Mortimer Adler literally wrote the the book on reading. ElementaryInspectionalAnalyticalSyntopical

The Secret To Learning New Skills Twice As Fast Learning a new skill doesn’t depend so much on how much practice you do, but how you practice. The key is to subtly vary your training with changes that keep your brain learning. By changing up your routine, new research says, you can cut the time to acquire a new skill by half. Acquiring new motor skills requires repetition, but iterative repetition is much more effective than just doing the same thing over and over. A new study from Johns Hopkins found that modifying practice sessions led participants to learn a new computer-based motor skill quicker than straight repetition. The results suggest that a process called reconsolidation is at work.

Beautiful Illustrated Plotting Of Fiction Genres The world of fiction is one that is only limited by your own imagination. There are endless possibilities for stories to head in one direction or another, but this excellent poster from Pop Chart Labs investigates the links between myriad genres and the famous books that define them. It's entitled A Plotting Of Fiction Genres, it's available to buy as an 18" x 24" poster for $29 (£18.80)

How To Teach All Students To Think Critically All first year students at the University of Technology Sydney could soon be required to take a compulsory maths course in an attempt to give them some numerical thinking skills. The new course would be an elective next year and mandatory in 2016 with the university’s deputy vice-chancellor for education and students Shirley Alexander saying the aim is to give students some maths “critical thinking” skills. This is a worthwhile goal, but what about critical thinking in general?

Seven Tips From Ernest Hemingway on How to Write Fiction Before he was a big game hunter, before he was a deep-sea fisherman, Ernest Hemingway was a craftsman who would rise very early in the morning and write. His best stories are masterpieces of the modern era, and his prose style is one of the most influential of the 20th century. Hemingway never wrote a treatise on the art of writing fiction. He did, however, leave behind a great many passages in letters, articles and books with opinions and advice on writing. Some of the best of those were assembled in 1984 by Larry W. Robots and Babies Both Use Curiosity to Learn Humans have a drive to eat. We have a drive to drink. We have a drive to reproduce.

Discussion Questions I hope that book clubs and classes discussing my books will find the below questions and exercises both helpful and inspirational. Thank you so much to all the readers who helped me compile these! Please note, these questions are filled with spoilers! Discussion Questions for CINDER 1. How to become smarter by doing less in the information age Common: Believing that focusing on detail is the only and best path to success. Uncommon: Let’s be honest: Most things studied in college are quickly forgotten. I believe this is partly due to the sheer number of concepts addressed per class, per semester. In my experience, the emphasis is often on breadth versus depth.

stephen-kings-top-20-rules-for-writers In one of my favorite Stephen King interviews, for The Atlantic, he talks at length about the vital importance of a good opening line. “There are all sorts of theories,” he says, “it’s a tricky thing.” “But there’s one thing” he’s sure about: “An opening line should invite the reader to begin the story. The Anti-Reading List All successful investors read a lot. It's a common denominator you'll find among most smart people. Charlie Munger once said, "In my whole life, I have known no wise people who didn't read all the time – none, zero."

The Austen Project Buy From These Stores Purchase hardback from: Purchase e-book from: International Purchase Beloved and bestselling author Alexander McCall Smith lends his delightful touch to the Austen classic, Emma. Prepare to meet a young woman who thinks she knows everything Fresh from university, Emma Woodhouse arrives home in Norfolk ready to embark on adult life with a splash. Not only has her sister, Isabella, been whisked away on a motorbike to London, but her astute governess, Miss Taylor is at a loose end watching as Mr.

Sketchnotes 101: The Basics of Visual Note-taking Welcome to the second article in the the new Core77 "Sketchnotes Channel" (www.core77.com/sketchnotes) where we'll be exploring the application of visual thinking tools in the worlds of design and creative thinking. So you say you're ready to start sketchnoting. Maybe you're not much of a sketcher but you take a lot of notes, and are interested in making them more meaningful and interesting, but you're afraid your drawings are too crude. For you, it's important to stress that sketchnotes—although they are inherently a visual medium—do not require drawing ability of any kind. Essentially they're about transforming ideas into visual communication; structuring thoughts and giving hierarchy to concepts can be completed with strictly text and a few lines.

The 4 Rituals That Will Make You An Expert At Anything We hear a lot about “10,000 hours” being what it takes to become an expert. But the majority of people totally misunderstand the idea. So I decided to go to the source and talk to the guy who actually created the theory.