A scientific guide to posting Tweets, Facebook posts, Emails and Blog posts at the best time 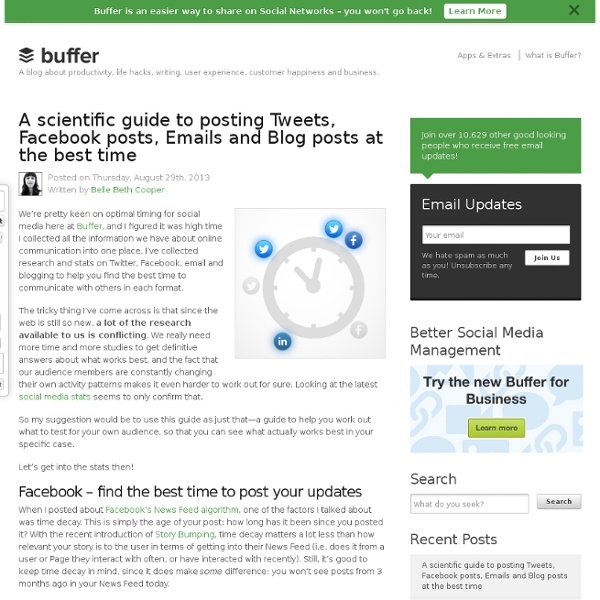 10.7K Flares Filament.io 10.7K Flares × We’re pretty keen on optimal timing for social media here at Buffer, and I figured it was high time I collected all the information we have about online communication into one place. I’ve collected research and stats on Twitter, Facebook, email and blogging to help you find the best time to communicate with others in each format. The tricky thing I’ve come across is that since the web is still so new, a lot of the research available to us is conflicting. So my suggestion would be to use this guide as just that—a guide to help you work out what to test for your own audience, so that you can see what actually works best in your specific case. Let’s get into the stats then! Facebook – find the best time to post your updates When I posted about Facebook’s News Feed algorithm, one of the factors I talked about was time decay. In terms of specific days and times to post on Facebook, here are some of the stats I found: Timing depends on the individual

These 5 Posts Will Increase Your Facebook Engagement Overnight A lot of businesses create Facebook pages and then assume their fans will engage with every post. Bad assumption! Just because someone has Liked your fan page doesn’t mean they’ll Like & comment on your posts. After all, you aren’t “Friends” with them. The ONLY way to capture the attention of your fans is to publish great posts that entice them to engage. Here are 5 posts that will do that: 5 Posts to Increase Engagement on Facebook Immediately 1. Every time I post a funny picture like this and then ask fans to caption it, the response is huge. People just love to add their funny comments to photos like this. I posted this image while writing this blog post and quickly have gotten 20 shares, 20 likes and 10 comments. We already know that photos get great Edgerank in Facebook. Check out Josh’s post where he shows you how to find awesome photos to share on Facebook if you’re having trouble finding images. 2. Quotes are maybe the simplest way to increase engagement on your page. Why? 3. 4. 5. Why?

Najat Kaanache is Out of the Kitchen at Souk in Trinity Groves 29 comments I was off the grid for a couple of days and didn’t learn until late Saturday that chef Najat Kaanache was no longer at Souk. According to Teresa “Gubbshoe” Gubbins, the chef, who refers to herself as the The Pilgrim Chef, has been gone since February 20. Kaanache came to Dallas to consult with Stephan Pyles on Stampede 66. She left to try and ressusitate Private Social/PS. Last September, Kaanache joined forces with Yaser Khalaf owner of Baboush and Farnatchi. The word on the street is Kaanache is a control freak and difficult to work with.

A Scientific Guide to Writing Great Headlines on Twitter, Facebook, and Your Blog 5.9K Flares Filament.io 5.9K Flares × Ever since we started Buffer a little over 2 years ago, people have been asking us about one question very specifically: How can I write great headlines for social networks and my blog? The topic is a very tricky one, as the accuracy for what works best is hard to nail down. So I thought of combining all the research we’ve done for the Buffer social accounts and our blog as well as the best research out there and combining them into one comprehensive guide. Without any further ado, here is a scientific guide to great copywriting on Twitter, Facebook and your blog: What works best on Twitter? Finding the right headline for your Tweet is one of the most important things to do, especially as Twitter only allows for text display. Whilst there is a ton of data out there on which words to use and how to write headlines, the best way to do anything truly scientifically, is to test and learn yourself. Test it yourself – here is how 1.) 2.) 3.) First Tweet: Example:

The 7 Biggest, Counterintuitive Social Media Mistakes You May Be Making 5K Flares Filament.io 5K Flares × I’m pretty well known for making mistakes. It’s kind of a known trait of mine. Just this weekend I walked into a door because I didn’t open it properly first. When it comes to social media, though, I try hard to learn from mistakes since they’re all saved for me to reflect on. The funny thing about some of the mistakes I looked at for this post is that the advice to avoid them is counterintuitive—sometimes even controversial. 1. This is something that can be pretty controversial – a lot of people discourage re-posting links to the same content more than once. Guy is a big proponent of repeating your tweets, and has faced a lot of flack for it. Guy makes a good point that his followers probably aren’t reading his tweets at every moment of the day. I repeat my tweets because I don’t assume that all my followers are reading me 24 x 7 x 365. For Guy’s tweets that link to posts on his site, Holy Kaw, he repeats these four times, eight hours apart: 2. 3. 1. 2.

Lovemarks: the future beyond brands Google Realtime Search Gets Home Page, Conversation View, Alerts & Geosearch Google Realtime Search has finally gained its own home page, as well as some new tools including “conversations view,” Google Alerts for real time content and the ability to see tweets filtered by geography. New Home Page Back in June, my Can Google Real Time Search Have Its Own Home Page Now? covered how frustrating it has been that there’s no way to point people directly at Google Realtime Search (the product now goes from being “Google Real-Time Search” to “Google Realtime Search” — one word — with this launch). Well, you’re supposed to find it there. Use that, and you can get into the service. Realtime Alerts Many people are familiar with Google Alerts, which allow you get an email whenever new content is found by Google matching your query. Conversation View When you do a search, there’s now a “Full conversation” link that appears to help you see a thread of discussion that may be happening between various people. Movie Time

7 Powerful Facebook Statistics You Should Know for a More Engaging Facebook Page 2.7K Flares Filament.io 2.7K Flares × One of the things we focus on most at Buffer is the best time to post to Twitter and Facebook. This is because we want to help you get more engagement with your audience, which is beneficial for everyone. While the best time to post is definitely important, there are some other things to keep in mind. I had a look at what kind of updates work best for Facebook pages to increase interaction and found 7 interesting statistics that you’ll probably find useful if you’re trying to make your page more engaging. 1. Not only do photo posts get more engagement than links, videos or text-based updates, they actually account for 93% of the most engaging posts on Facebook. Wishpond’s data says that overall, photo posts get 120% more engagement than the average post, and photo albums actually get 180% more engagement. Especially Buffer’s new image posting feature let’s you right click any image on the web and then share it in full-size to your wall in seconds. 2.

“you simply can’t train people to be social!” Over the past year I have been working on change initiatives to improve collaboration and knowledge-sharing with two large companies, one of them a multinational. In each case, implementation has boiled down to two components: individual skills & organizational support. Effective organizational collaboration comes about when workers regularly narrate their work within a structure that encourages transparency and shares power & decision-making. I have also learned that changing work routines can be a messy process that requires significant time, much of it dedicated to modelling behaviours. My Internet Time Alliance colleague, Jane Hart, notes, ” … as for the new social and collaboration skills that workers require, well you simply can’t train people to be social! Jane refers to the collaboration pyramid by Oscar Berg, an excellent model to show what needs to be addressed to become a social business. Creating a supportive social environment is management’s responsibility.

How To Create Perfect Vine, Instagram, Pinterest, Google+, Facebook & Twitter Posts: Version 2 [Infographic] Social media works at a fast pace, Vine has only been around for 8 months yet it’s taking on the big social networks and is now used as a key aspect of many campaigns. If you read our last Perfect Post infographic then here’s a recap – but we’ve now included how to best use Instagram and Vine to your advantage. If you’re new here, well, we can’t wave a magic wand and give you top-notch engagement across all your social platforms – we’re old fashioned and believe you have to work at it – but we’ve tried to make it easier for you. Here is what you can do to create ‘perfect social media posts’: Copy and paste the code below into your web page to embed this infographic.

How To Find Your Best Time To Tweet: The 4 Most Accurate Methods 2K Flares Filament.io 2K Flares × Finding the right time to post on social media can be tricky, especially when each different social network has its own audience to think about. And we’ve written a few different articles here on the Buffer blog that touched on how to come up with the best time to Tweet. And yet, we never quite dedicated a full article to the topic. There are a few different ways to help us decide what timing we should go for, especially for Twitter, so I wanted to take a look at four ways we can experiment with timing of Tweets. 1.) If I had to suggest just one of these approaches to determining what time is best to Tweet, it’d be this one. You can test this out with a bunch of different tools, but I’m going to use Buffer to show you some examples, since it’s so easy to do within Buffer. 1. 2. 3. And here’s an example of what our analytics would look like: 4. 5. 2.) There are a number of tools that help you come up with the best times to Tweet. 3.) 4.)

Ubud. Aaron Lee Twitter - How Aaron build 400k followers on twitter Aaron Lee explains how he built up 400k followers on twitter since he joined. He also explains how to has a very engaged audience and is very responsive despite having such a huge following. Aaron is a good friend and it’s a great honor for me to have him guest post. This post provides some fantastic actionable advice. Ok, over to Aaron…. I joined Twitter on March 20 th 2009. Joining twitter in 2009 Using Google I searched for people to follow and quickly people started to follow me back. Getting lots of interaction through twitter I’ve been a fan of Twitter ever since. One of those amazing people is none other than Mr Ian Cleary. 1. I’ve been using Social Engage for over three years now. Why am I such a huge fan of Social Engage? A quick look inside this tool and it is easy to see why it has helped me so much over the years. Mentions include every tweet which has my Twitter handle, including retweets, etc. social engage helps keep track of conversations and helps me respond to anyone 2.