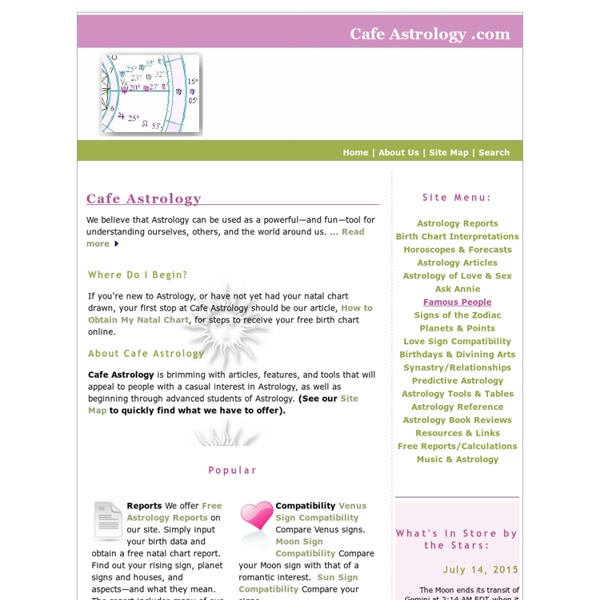 Spiritual Meaning of Numbers Every number has a certain power which is expressed both by its symbol to denote its representation and by its connection to universal principles. Numbers have relationships with all things in nature, thus making them supremely powerful symbolic expressions. At its most basic, numerology is the study of numbers and their influence in our lives, but there is so much more potential. I love numerology because it's a thread of understanding that can be pulled, and pulled and pulled - ad infinitum. Numerology offers so many facets to understanding a single event. The esoteric meaning of numbers can be a real code-cracker of our life experience. 12 Personalities of Venus I choose the moon as my favorite orb and Neptune as my favorite planet. I doubt there are many people in the world who choose the beautiful blue Neptune as a favorite, unless they work in a glamorous industry, the arts, or work as musicians. However, today we focus on Venus, the planet associated with the Greek goddess Aphrodite, women, and with the rulers Taurus and Libra. We travel through the zodiac revealing the 12 personalities of this personal planet. I once learned about our planetary evolution from an astrologer in Seattle.

Astrology & the Chakras In this article I would like to explore the exciting possibility of bridging two of history's greatest psychological systems -- astrology and the chakras. Conventionally, these two systems have been seen as having little or nothing to do with each other, the former primarily concerning the outer world, or macrocosm, and the latter involving the inner world, or microcosm. In fact, as we shall soon see, these two systems are but two sides of the same coin, each one complementing the other and thus enhancing our understanding of both. The basic system of correspondences I will be using here is drawn from teachers I have studied with in the Kriya Yoga lineage.1 The general system of "chakric horoscopes" and their guidelines for interpretation are my own, developed over more than a decade of working with these basic correspondences. With that said, let us begin by exploring some of the core ideas of chakric philosophy. What Are the Chakras?

Birthday Numerology How to Use Birthday Numerology I have included this brief guide on birthday numerology for the purpose of better understanding how numbers are symbols, and how these symbols play a part in our lives. As mentioned on the Spiritual Meaning of Numbers page, every number has a certain power that expresses it's connection to the universe. Numbers have relationships with all things in nature, thus making them supremely powerful symbolic expressions. By reducing an important date (such as our birthday) into one number, we can then refer to the symbolism of that number and then gain knowledge about various aspects of ourselves and our lives.

Dana Gerhardt: The 7th House Dear April, Writing about the 7th house of partnership, I don't trust myself. That is why, dear friend, I'm asking you to share my column. Not only are you happily married, you have an expressive 7th house Moon. Chinese Astrology, Chinese Zodiac, Horoscopes, Year of the Rabbit The Dog Personality Of all the signs the Dog symbolizes honor and justice. The honorable Dog is the sign most likely to speak out about wrongs in the world and to call for justice. The Zodiac by John P. Pratt Published as "The Constellations Tell of Christ," by Meridian Magazine (15 Jun 2005). ©2005 by John P. Pratt. All rights Reserved.

Libra’s Balancing Act After the busy harvest season of Virgo, and before the intense descent into the darkness of winter with Scorpio, comes Libra making great effort to maintain a delicate balance. From September 22nd, the well-known Autumnal Equinox, until October 22nd we experience those golden days when nature seems to take a pause and everything is a bit dreamy and hushed during the day light hours as the nights become ever crisper, colder, and darker. The scales of balance known as Libra were called Zibanitum (scales) by the Babylonians, Zugas (yoke) by the Greeks, Tula or Tulam (balance) by those in India, and Tien Ching (Celestial Balance) by the Chinese. The Egyptians found a deep significance in these scales of balance. One mythic version has the goddess Maat, at the time of death, placing the human soul on one scale, and a feather on the other.

How to read your Birth Chart - A Key to the Symbols The language of astrology is a symbolic one, and it has its own alphabet! This shorthand alphabet, or collection of symbols (also called glyphs, or sigils) is one that we need to learn if we are to be able to interpret a horoscope chart. Each symbolic glyph has a standard meaning, though, like a gem, it has many subtle facets which come to light when interpreted in a delineation of the chart. The symbols fall naturally into four main groups: Signs of the ZodiacPlanets and planet-like itemsAspects, both major and minorOther useful symbols Not every arcane symbol is represented here—there is an almost limitless number of sigils, especially in alchemy and in magical figures—but I have selected the most important ones, which are used on a daily basis in Western Tropical Astrology.