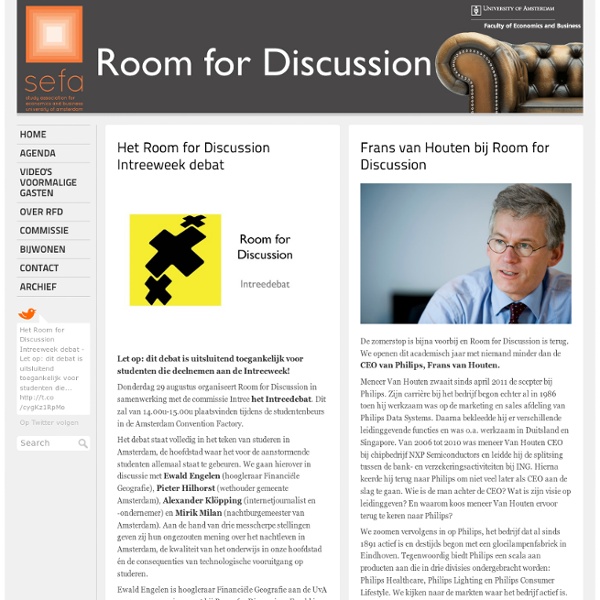 An old idea is back on the agenda: an unconditional guaranteed basic income for all, no questions asked. No more worries, but economic freedom for all, the end of poverty. A free lunch fallacy, or socio-economic paradise? Recently Rutger Bregman reinvigorated the idea of the universal basic income on Dutch television in Tegenlicht, which seems more than a trend. The international discussion on basic income has been rekindled. With technology increasing productivity to unknown heights, a new question has popped up. On Wednesday the 9th of April, Room for Discussion will foster an economic debate on basic income with Guy Standing. Guy Standing is a British professor in Development Studies at SOAS (University of London) and one of the founders of the Basic Income Earth Network (BIEN) advocating a European petition on basic income. Attend our interview on the 9th of April at 12:30 at the Amsterdamse Academische Club. Who: Guy Standing (professor Development Studies) Kind regards, P.S.

Why I support the Global Shapers Twenty-five years ago, I had a choice: build on the studies I had just finished in medical biology with a PhD, or take the chance to go to business school. Both options were great: a career in research at a world-class university, or the chance to learn business from some of the brightest commercial minds available. It was a world of opportunity. Cronyism Cronyism is partiality to long-standing friends, especially by appointing them to positions of authority, regardless of their qualifications. Hence, cronyism is contrary in practice and principle to meritocracy. Cronyism exists when the appointer and the beneficiary are in social contact. Often, the appointer is inadequate to hold his or her own job or position of authority, and for this reason the appointer appoints individuals who will not try to weaken him or her, or express views contrary to those of the appointer. Politically, "cronyism" is derogatorily used.[1] Etymology[edit]

Christine Lagarde: "i look under the skin" " tea leaves" When Christine Lagarde became the first female finance minister of a major global economy, it's a measure of how much happier the world was back then that media interest focused chiefly on her talent for synchronised swimming. She was the foxy Frenchwoman who'd won medals in the national team in her teens, then worked her way up to chair an American law firm in Chicago, before being invited back to Paris in 2005 as trade minister and promoted two years later to the Treasury. Journalists had lots of fun picturing her upside down in a pool, wearing waterproof lipstick and a nose clip – and Lagarde played along with the joke, crediting the sport with teaching her a useful political skill: "To grit your teeth and smile." No one is writing about synchronised swimming any more.

Bala since Sep 2007: Assistant Professor at the Dept. of Theatre and Performance Studies 2008-2013: Co-ordinator of the Erasmus Mundus MA International Performance Research Programme (MAIPR) at the University of Amsterdam. This programme is organised in collaboration with the universities of Warwick (UK), Helsinki/Tampere (Finland) and Belgrade (Serbia). MAIPR Website University of Warwick European Central Bank -mandate- The primary objective of the European Central Bank, as mandated in Article 2 of the Statute of the ECB,[2] is to maintain price stability within the Eurozone. The basic tasks, as defined in Article 3 of the Statute,[2] are to define and implement the monetary policy for the Eurozone, to conduct foreign exchange operations, to take care of the foreign reserves of the European System of Central Banks and operation of the financial market infrastructure under the TARGET2 payments system and the technical platform (currently being developed) for settlement of securities in Europe (TARGET2 Securities). The ECB has, under Article 16 of its Statute,[2] the exclusive right to authorise the issuance of euro banknotes. Member states can issue euro coins, but the amount must be authorised by the ECB beforehand (upon the introduction of the euro, the ECB also had exclusive right to issue coins).[citation needed] History[edit]

DSM CEO receives Maastricht University Honorary DoctorateTalkin'business Mr. Feike Sijbesma, CEO and Managing Board Chairman of Royal DSM, the global Life Sciences and Materials Sciences company, received an honorary doctorate from the University of Maastricht on the occasion of the university’s 37th Dies Natalis celebration on 14 January. The theme of this year’s celebration was ’Inviting Excellence’. One of the core elements of the university’s strategy is the development of a network in Limburg, the Netherlands and beyond. In this context five outstanding individuals were nominated by each faculty or the Executive Board, and awarded an honorary doctorate. The University’s Board of Governors nominated Mr.

Tata Asset Management to Amsterdam Press release, 3 April 2012 Between 25 and 31 March 2012, the Mayor of Amsterdam, Eberhard van der Laan, led an Amsterdam Metropolitan Area trade mission to India. As a result of this, three Indian companies have already announced plans to open new offices in Amsterdam this year. They include the ICT companies KPIT Cummins and Value Lab, and the fund management company Tata Asset Management. Room4Discussion on USTREAM: . Autres événements Watch without ads Ustream © Search Log in / Sign up Capitalism: A Ghost Story Arundhati Roy Is it a house or a home? A temple to the new India, or a warehouse for its ghosts? [video] taxevaders.net playfully invading Super Mario #goldman Draghi's austerity mandate Sign up | Login Welcome Map Feed Details Download Help About Blog