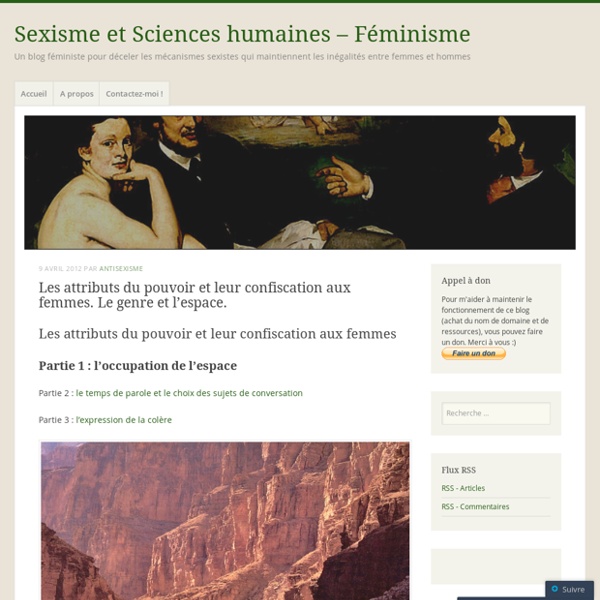 Why are white people expats when the rest of us are immigrants ? In the lexicon of human migration there are still hierarchical words, created with the purpose of putting white people above everyone else. One of those remnants is the word “expat”. What is an expat? And who is an expat? The Dangerous Dynamic of Gender By Sally Raskoff Have you noticed the demographics of the people who tend to perpetrate mass shootings in public spaces? I’ve noticed they tend to be young, male, from middle class backgrounds, and socially isolated. These are not trivial factors. Gender and the Body Language of Power We’re celebrating the end of the year with our most popular posts from 2013, plus a few of our favorites tossed in. Enjoy! Philosopher Sandra Lee Bartky once observed that being feminine often means using one’s body to portray powerlessness. Consider: A feminine person keeps her body small and contained; she makes sure that it doesn’t take up to much space or impose itself. She walks and sits in tightly packaged ways. She doesn’t cover the breadth of the sidewalk or expand herself beyond the chair she occupies.

Why I Am a Black Male Feminist When I was a little boy, my mother and father used to argue a lot. Some mornings, I would wake up to the alarming sound of my parents arguing loudly. The disagreement would continue until my father would yell with finality, "That is it! I'm not talking about this anymore!" The dispute would end right there. When I Don’t Shave My Legs, I Have Nightmares We are a hirsute people. Not even joking: When I leave my legs unshaven I have dreams about the fact that my legs are unshaven in contexts where it is embarrassing or even horrifying. What the hell is going on in my psyche? Let’s see if we can get to the bottom of it, or at least unpack it a bit. (If you’re still with me after the headline and opening pic, the rest should be cake!) In real life, if I haven’t shaved and I suddenly need to go somewhere I’ll give myself a quick shave in the bathroom sink, or if the weather’s cool, throw on a pair of black tights.

In One Video, These Students Remind Us What's Really at the Root of Rape Culture It's no secret that toxic masculinity — the set of aspirational tenets that encourage men to feel entitled to women's attention and bodies — is a major problem. But one group of students is tackling the issue with an incisive new video that both expertly outlines the root of the problem and gives advice on what everyone can do to fix it. In the video, Vine star Chaz Smith joins the One Student project to address the ways men can help cultivate a culture in which women's bodily autonomy and agency are affirmed and respected. The video uses the analogy of playing sports to make a striking point about the ways women are encouraged to "play it safe" while men are lauded for "going for it."

Americans Prefer Boys to Girls, Just as They Did in 1941 PRINCETON, NJ -- If Americans could have only one child, they would prefer that it be a boy rather than a girl, by a 40% to 28% margin, with the rest having no preference or no opinion on the matter. These attitudes are remarkably similar to what Gallup measured in 1941, when Americans preferred a boy to a girl by a 38% to 24% margin. Gallup has asked Americans about their preferences for a boy or a girl -- using slightly different question wordings over the years -- 10 times since 1941. In each instance, the results tilt toward a preference for a boy rather than a girl.

Fuck You, Dudes Who Sit With Their Legs Spread So Wide That They Take Up Two Seats (Your Dick Is Not That Big) I've seen a lot of women — including older women, women with children, women with disabilities — offer up their seats on a long, crowded, wildly-rocking Green Line ride (Chicagolander here) for **other women** who are older, carrying or supervising children, or who have visible physical disabilities or difficulties. I have also occasionally seen a male child (we're talking somewhere between 8 and 14 years old) do the same. It is so rare that I see a man offer his seat. Or the part of "his" seat dedicated to his other leg. I want to thank people when I see them getting up to give someone else they're seat; it's such a good thing to do, especially if you can see the person standing is struggling. But I mostly don't, because I feel guilty for not having done so myself.

Stranger Danger New Comic! TRANSLATIONS:Spanish (Credit: Taller de Teoría Queer) All of the experiences in this comic are either directly from my own life or related to me by people I know and care for. Free TOEFL Practice Test Sebastian in the Netherlands I'm a software engineer and am in an international team of developers. Though there are no native English speakers here, we do have to use English all the time since it's the only language we have in common. I will be using the iPod Shuffle while traveling/working/volunteering abroad. I'm happy about the score of the TOEFL test, I am planning to work or volunteer abroad as an English teacher but as a non-native speaker myself I was not entirely confident my skill in English was high enough to be teaching. Marija in Croatia I'm currently a high school student. I'm attending science school.

Sex redefined Illustration by Jonny Wan As a clinical geneticist, Paul James is accustomed to discussing some of the most delicate issues with his patients. But in early 2010, he found himself having a particularly awkward conversation about sex. A 46-year-old pregnant woman had visited his clinic at the Royal Melbourne Hospital in Australia to hear the results of an amniocentesis test to screen her baby's chromosomes for abnormalities. The baby was fine — but follow-up tests had revealed something astonishing about the mother. Her body was built of cells from two individuals, probably from twin embryos that had merged in her own mother's womb.

Androcentrism: It’s Okay to Be a Boy, but Being a Girl… Sociologists use the term “androcentrism” to refer to a new kind of sexism, one that replaces the favoring of men over women with the favoring of masculinity over femininity. According to the rules of androcentrism, men and women alike are rewarded, but only insofar as they are masculine (e.g., they play sports, drink whiskey, and are lawyers or surgeons w00t!). Meanwhile, men are punished for doing femininity and women… well, women are required to do femininity and simultaneously punished for it. Illustrating this concept, much more concisely, is this altered photograph of James Franco in drag. A lesson re-learned on gender and space I’ve recently returned from a holiday in Melbourne (a city in southern Australia). It’s a gorgeous city; you can read about some of what I did and see a few pictures from the trip here. But just now I want to tell you a small story about the flight.

11 Ways To Avoid Sounding Like a Sexist Jerk–Even If You’re a Woman Whatever your opinion of the campaign by Sheryl Sandberg’s Lean In foundation to ban the word bossy — which, for the record, I advised on — one thing is indisputable: the power of words is stark. Call a little girl “bossy” and she starts to avoid leadership roles because she’s afraid of being seen as unlikeable. People are already wary of assertive women at work, but call a woman “aggressive” out loud and they will probably like her less. Call a female politician a ballbuster enough times, and people may actually be less likely to vote for her. Words tell us something about the way our culture perceives women in power, and whether we believe they’re supposed to be there. So, in an attempt to save you — writers, speakers, humans, journalists — from falling into the gender bias trap unintentionally, we’ve put together this handy guide: