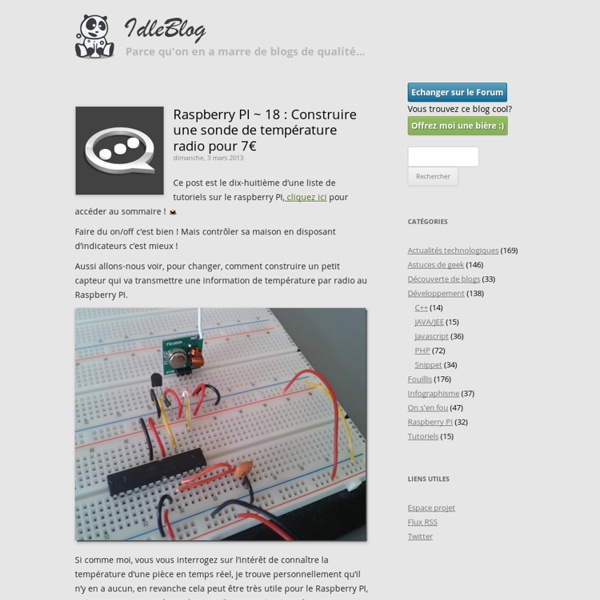 GPS tracking August 03, 2012 at 10:26 PM I thought it might be fun to turn my Raspberry Pi into a vehicle tracker. The nearest I got to building a truly bespoke tracker was in 2004 using a Siemens TC45 & later TC65, where I wrote the firmware. There wasn't really anything on the market then to do what we wanted, so we built our own, and I took care of the software side. [SMS] Sony Ericsson PDU Summary For nothing have I had more requests than this piece of code. It’s use is obvious; forcing a turned on Sony Ericsson that supports a real serial interface to send a sms, receive, read, call etc. The hardest part in this is sending an SMS through real serial with f.e. an Arduino using this Sony Ericsson cellphone. This is because the info within the sms has to be coded in PDU. All other stuff you can just write, but the info has to be coded in a crappy fashion.

Arduino - €12€ The Arduino Mini is a small microcontroller board intended for use on breadboards and when space is at a premiumand. The revision 05 has a new package for the ATmega328 ( datasheet ), which enables all components to be on the top of the board. It also has an onboard reset button. The 05 version has the same pin configuration as revision 04. Additional features coming with the 05 version are: new PCB layout and design onboard reset button Wireless Multi-Channel Voice-Controlled Electrical Outlets with Raspberry Pi Update 2/11/2014: Thanks to everyone who voted for this project in the Raspberry Pi contest! This project is a combination of several difference resources: My single-outlet control project with Raspberry Pi and Python, originally inspired by user wilq44's Raspberry Pi GPIO home automation WiringPi, software written by Gordon Henderson that allows "Arduino style" control of the GPIO pins from the command line in a Linux terminal Voice Command, a package written by Steven Hickson that allows voice control of the Raspberry Pi by connecting to a Google speech-to-text service.

433 MHz projects This page is about reverse engineering protocols used in simple AM RF modules at 433 MHz. This frequency is very popular for various inexpensive RF wireless things, like: wireless thermometers remote controlled appliances remote camera flash and shutter triggers door bells Knowledge of the protocol for these kinds of applications could be used to add RF capabilities to hobby projects. Protocol: A pulse sequence encodes 8 bits (each encoded as a short or long pulse) and an epilogue The elementary time-unit T seems to be about 120 microseconds A 0-bit is encoded as 1100 in the air and a 1-bit is encoded as 11000000 in the air, where each bit in the air has duration T The epilogue following the encoded bits is 1001111 The interval between pulse sequences is 16 T For a half-press, the first four bits contain 0000 and the last four bits contain the channel code (inverted) For a full-press, the first four bits and the last four bits both contain the channel code (inverted). RF recording

Install gphoto2 on your raspberry Via the free software gphoto2 it is possible to connect a digital camera (Canon/Nikon/Olympus, full compatibility list) to your Raspberry Pi in order to remotely take pictures and automatically download them to the Raspberry's memory. Easy case You can install gphoto2 very easily via the command line: GSM Alarm - PROJECTS * SMS Alarm This Software uses Arduino connected to a mobile phone(SIEMENS C75) and it sends a SMS when a certain amount of light is off (LDR) and it sends another (SMS) after light values are restored. Grove - Relay [COM22639P] - $2.90 Hi. I want to turn on a 12V Light from this relay. Do I need to have a transistor as well. You can use the Relay separately without other components .

Long Range UHF RFID Item Tracking System Maker spaces typically have hundreds of valuable tools available for use by their members. These tools can navigate from room to room and project to project. There is no real good way of knowing the whereabouts of a particular tool at a given time. Paper sign-out systems are often forgotten in the adrenaline rush of finishing an exciting project, and you can't always count on people putting things away properly (though they really should!). It is easy for items to become misplaced and lost, sometimes for weeks on-end!