10 American Foods that are Banned in Other Countries 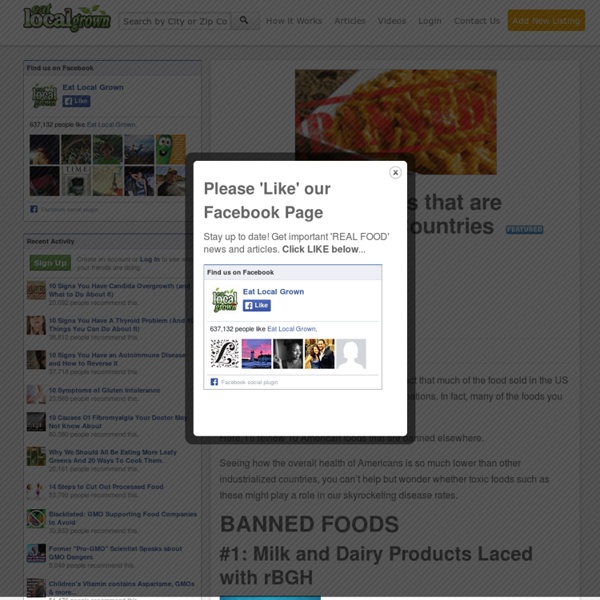 Americans are slowly waking up to the sad fact that much of the food sold in the US is far inferior to the same foods sold in other nations. In fact, many of the foods you eat are BANNED in other countries. Here, I’ll review 10 American foods that are banned elsewhere. Seeing how the overall health of Americans is so much lower than other industrialized countries, you can’t help but wonder whether toxic foods such as these might play a role in our skyrocketing disease rates. #1: Milk and Dairy Products Laced with rBGH Recombinant bovine growth hormone (rBGH) is the largest selling dairy animal drug in America. It’s injected into cows to increase milk production, but it is banned in at least 30 other nations because of its dangers to human health, which include an increased risk for colorectal, prostate, and breast cancer by promoting conversion of normal tissue cells into cancerous ones. Where it’s banned: Australia, New Zealand, Israel, EU and Canada #2: Genetically Engineered Papaya

40 Must-See Photos From The Past The phrase “a picture is worth a thousand words” was coined by American newspaper editor Arthur Brisbane in 1911. It’s a simple notion that applies to many aspects of our lives, but especially to historical photography. Sometimes, one simple picture can tell you more about history than any story you might read or any document you might analyze. [Read more...] These photographs all tell stories about the historical figures or events that they represent. Once taken simply to document their present, they now help us witness the past. Perhaps the wars, poverty, fights for freedom and little miracles of the past have lessons for us that we can use today? (via sobadsogood) Woman With A Gas-Resistant Pram, England, 1938 Unpacking the head of the Statue of Liberty, 1885 Elvis in the Army, 1958 Animals being used as part of medical therapy, 1956 Testing of new bulletproof vests, 1923 Charlie Chaplin at age 27, 1916 Hindenburg Disaster, May 6, 1937 Circus hippo pulling a cart, 1924

How Chicken Is Killing the Planet - World Change Cafe Earlier this month, while you were busy sneaking out of your empty office, hoping nobody would notice your starting the holiday weekend early, the USDA was also doing something it was hoping nobody would notice. It was green-lighting the sale of Chinese processed American chicken. As Politico explained, “U.S. officials have given the thumbs-up to four Chinese poultry plants, paving the way for the country to send processed chicken to American markets.” But while, “at first, China will only be able to process chicken that has been slaughtered in the U.S. or other certified countries,” that should not be a comfort to fans of the McNugget, Campbell’s chicken soup, or any other processed chicken product. To start, that a chicken was born and bred on U.S. soil is no guarantee of its quality. Don’t be comforted by the fact that chicken was processed in the U.S. either. But Big Chicken doesn’t just exploit the animals – the environment and its employees suffer as well. Re-posted from AlterNet.

Traditional Crispiest Greek Lemon Potatoes Recipe (Patates Lemonates) - My Greek Dish The perfect, traditional Greek lemon potatoes, ideal for your Sunday family roast!!! Crispy on the outside, fluffy on the inside with a delicious lemony flavour.. Greek lemon potatoes are perfect on their own served with some crusted bread to dig into all the delicious juices or accompanying roast lamb, chicken, pork, a juicy burger or steak, and the list goes on. The perfect Greek lemon potatoes: start with the right potato variety Selecting the right potato variety for your Greek lemon potatoes is crucial if you want to achieve that perfectly crispy on the outside and fluffy on the inside texture. You can parboil them, i.e. cut them up in wedges, boil them in a pan until right before they are ready and then sift using a colander. The second approach will take a little longer as the potatoes need to bake for longer but I have found that it gives them crispier edges, while the parboiled version allows for more of the lemon sauce to soak in and tend to be flakier. Ingredients Instructions

Tous à vos chaudrons... Convergence Alimentaire Chipotle style Cilantro Lime Rice Recipe | Mexican recipes Have you ever been a situation when you wanted to throw out all things complicated - be it from serious life to career issues to as simple as clearing out a crumpled up wardrobe to your bookshelf? Ah! I know how it feels. Sometimes I feel that we all make things too complicated when they need not be. I LOVE chipotle and especially their Vegetarian Fajita Burritos. Enjoy it in Black and Mango Quesadillas for a substantial lunch, or in a burrito along with Vegan Frijoles refritos (Refried Beans), Guacamole, Pico de gallo or vibrant Mango Salsa. Method Soak the rice in some water for 10 minutes. In a skillet, in low heat, add the butter/oil along with rice and sugar. Add 2 cups of water and salt - cover and cook for about 10-15 minutes. Check to see if the rice has absorbed all the water. ( Note: Some people like to cook Basmati with 1 cup water. Stir it v lightly and add chopped cilantro.