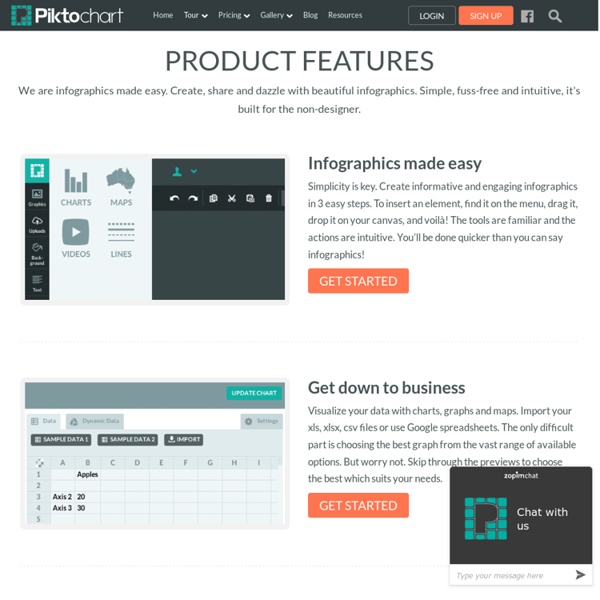 46 Tools To Make Infographics In The Classroom Infographics are interesting–a mash of (hopefully) easily-consumed visuals (so, symbols, shapes, and images) and added relevant character-based data (so, numbers, words, and brief sentences). The learning application for them is clear, with many academic standards–including the Common Core standards–requiring teachers to use a variety of media forms, charts, and other data for both information reading as well as general fluency. It’s curious they haven’t really “caught on” in schools considering how well they bridge both the old-form textbook habit of cramming tons of information into a small space, while also neatly overlapping with the dynamic and digital world. So if you want to try to make infographics–or better yet have students make them–where do you start?

My Teacher Is a Monster: A Sweet Modern Fable About Seeing Through the Othern... by Maria Popova A gentle illustrated reminder that we can’t love what we don’t know. “Love,” wrote Leo Tolstoy in his poignant letters to Gandhi on why we hurt one another, “represents the highest and indeed the only law of life, as every man knows and feels in the depths of his heart (and as we see most clearly in children)…” Tolstoy believed that if only we managed to see through our superficial differences and our fear of the other’s otherness, we’d recognize instantly the universe’s basic “law of love” — something to which we are born attuned, only to forget as we enter adulthood.

13 Reasons Teachers Should Use Diigo Home » Education, Social Media Written by Grace20 February 2012 The following is a guest post from Kay Cantwell, an Education Officer of Digital Learning at Brisbane Catholic Education in Brisbane Area, Australia. 13 Reasons Teachers Should Use Diigo Diigo stands for “Digest of Internet Information, Groups and Other stuff.” Tips, tricks and resources to make your own gorgeous infographics Infographics (or Information Graphics) are graphic visual representations of data or information, presented in a way to make it easier to consume information. Infographics gained popularity in the mid-2000′s with the advent of sites like Digg and Reddit, and have quickly become one of the most popular methods to display researched data. There are three main types of infographics – where data is presented in a timeline, where statistical data is presented in graphs or with icons, or where data is presented on a map.

Simple English ~ Nicola Prentis Things I’ve made or used without much adaptation to weave a conversation around. They can take longer than a one hour class. I take notes while the students are speaking to remind them of pronunciation errors, grammar points or vocab they’ve needed. Six of the Best Progams Your Childs Teacher Should be Using in Class If you haven’t noticed that technology in the classroom is exploding lately you may have missed the boat. The following are great programs being used in the classroom right now. Best of all they are all free. If used in the right way they will increase learning, increase engagement, and eliminate behavior problems.(Students love doing it). Check out these awesome programs.

20+ Tools to Create Your Own Infographics A picture is worth a thousand words – based on this, infographics would carry hundreds of thousands of words, yet if you let a reader choose between a full-length 1000-word article and an infographic that needs a few scroll-downs, they’d probably prefer absorbing information straight from the infographic. What’s not to like? Colored charts and illustrations deliver connections better than tables and figures and as users spend time looking back and forth the full infographic, they stay on the site longer. Plus, readers who like what they see are more likely to share visual guides more than articles.

15 Effective Tools for Visual Knowledge Management Since I started my quest a few years ago searching for the ultimate knowledge management tool, I’ve discovered a number of interesting applications that help people efficiently organize information. There certainly is no shortage of solutions for this problem domain. Many tools exist that offer the ability to discover, save, organize, search, and retrieve information. However, I’ve noticed a trend in recent years, and some newer applications are focusing more on the visual representation and relationship of knowledge. I believe this is in part due to the wider adoption of mind mapping (and concept mapping), and leveraging concepts and advances in the semantic web community. 81 Cantonese proverbs explained in one beautiful poster Graphic designer and cartoonist 阿塗(Ah To) was concerned about the survival of the Cantonese language in Canton and Hong Kong, so he published a comic called ”The Great Canton and Hong Kong Proverbs” in order to propagate Cantonese culture. The cartoon contains illustrations of 81 Cantonese proverbs all in one poster, and an author on the Blog of Cantonese Resources recently set to explaining the literal and figurative meanings behind each image. Reminiscent of the Dutch artist Pieter Bruegel's oil painting “Netherlandish Proverbs,” which illustrated Dutch proverbs and culture in the 1500's, Ah To's poster imitates the same idea.