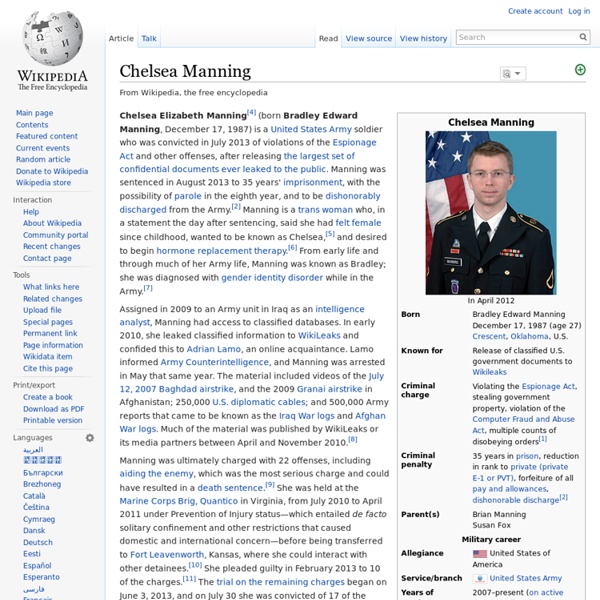 Assigned in 2009 to an Army unit in Iraq as an intelligence analyst, Manning had access to classified databases. In early 2010, she leaked classified information to WikiLeaks and confided this to Adrian Lamo, an online acquaintance. Lamo informed Army Counterintelligence, and Manning was arrested in May that same year. The material included videos of the July 12, 2007 Baghdad airstrike, and the 2009 Granai airstrike in Afghanistan; 250,000 U.S. diplomatic cables; and 500,000 Army reports that came to be known as the Iraq War logs and Afghan War logs. Reaction to Manning's disclosures, arrest, and sentence was mixed. Background Early life Born Bradley Edward Manning in 1987 in Crescent, Oklahoma, she was the second child of Susan Fox, originally from Wales, and Brian Manning, an American. Manning's father took a job as an information technology (IT) manager for a rental car agency, which meant he had to travel. Parents' divorce, move to Wales Return to the United States Military service

Bradley Manning faces 52 years in jail | World news Bradley Manning will wake up tomorrow, at a military base in Virginia, to his 189th day in custody for the alleged leak of more than 250,000 diplomatic cables to WikiLeaks. Manning, 23, a US army intelligence analyst brought up in the Oklahoma Bible belt and west Wales, is locked up with about half a dozen others in the marine-run facility in Quantico. He has had access to TV news and briefings from his lawyer, but little can have prepared him for the fury of the government he served about the impact of the cables leak. Hillary Clinton, the secretary of state, said it "tore at the fabric of government" and pledged "aggressive steps to hold responsible those who stole this information". Republicans branded it terrorism. He is said by friends to be on antidepressants and only a limited list of visitors are able to see him, yet one who saw him in recent weeks told the Guardian he was "doing surprisingly well, he is in high spirits". But who is Bradley Manning, and what motivated him?

Edward Snowden In 2013, Snowden was hired by an NSA contractor, Booz Allen Hamilton, after previous employment with Dell and the CIA.[4] On May 20, 2013, Snowden flew to Hong Kong after leaving his job at an NSA facility in Hawaii and in early June he revealed thousands of classified NSA documents to journalists Glenn Greenwald, Laura Poitras and Ewen MacAskill. Snowden came to international attention after stories based on the material appeared in The Guardian and The Washington Post. Further disclosures were made by other newspapers including Der Spiegel and The New York Times. On June 21, 2013, the U.S. Department of Justice unsealed charges against Snowden of two counts of violating the Espionage Act of 1917 and theft of government property.[5] On June 23, he flew to Moscow, Russia, where he remained for over a month. A subject of controversy, Snowden has been variously called a hero, a whistleblower, a dissident, a patriot and a traitor. Background Childhood, family, and education Political views

In his own words: 'This belongs in the public domain' | World news On 21 May this year, Bradley Manning initiated a series of online chats with former hacker Adrian Lamo. Below are edited excerpts that took place over several days, and which Lamo gave to Wired.com (and to the FBI). Dates are approximate. May 21 (1:41:12 pm) Bradley Manning: hi (1:44:04 pm) Manning: how are you? (1:47:01 pm) Manning: im an army intelligence analyst, deployed to eastern baghdad, pending discharge for "adjustment disorder" [. . .] (1:56:24 pm) Manning: im sure you're pretty busy… (1:58:31 pm) Manning: if you had unprecedented access to classified networks 14 hours a day 7 days a week for 8+ months, what would you do? May 22 Manning apparently told Lamo that he had provided WikiLeaks with 260,000 classified diplomatic cables (as well videos of a 2007 airstrike in Iraq and a 2009 airstrike in Afghanistan). (1:39:03 pm) Manning: i cant believe what im confessing to you :'( Later, Manning discussed his role as a source for WikiLeaks and his links with its founder Julian Assange.

After Senate vote, NSA prepares to shut down phone tracking program Hours after the Senate balked at reauthorizing the bulk collection of U.S. telephone records, the National Security Agency began shutting down a controversial program Saturday that senior intelligence and law enforcement officials say is vital to track terrorists in the United States. The Senate had debated into early predawn hours Saturday but failed to reach a deal to reform the program or extend its life beyond May 31, when the law used to authorize it is set to expire. Lawmakers then left on a weeklong recess, vowing to return at the end of it to try again in a rare Sunday session. Administration officials said later that they had to start the lengthy procedure of winding down the counter-terrorism program in anticipation of Congress failing to act. “That process has begun,” an administration official said Saturday. The data include the number dialed, duration, date and time for most telephone calls made by Americans. Opponents of the program, including presidential candidate Sen.

U.S. Intelligence Analyst Arrested in Wikileaks Video Probe | Threat Level Federal officials have arrested an Army intelligence analyst who boasted of giving classified U.S. combat video and hundreds of thousands of classified State Department records to whistleblower site Wikileaks, Wired.com has learned. PFC Bradley Manning, 22, of Potomac, Maryland, was stationed at Forward Operating Base Hammer, 40 miles east of Baghdad, where he was arrested nearly two weeks ago by the Army’s Criminal Investigation Division. A family member says he’s being held in custody in Kuwait, and has not been formally charged. Manning was turned in late last month by a former computer hacker with whom he spoke online. “Hillary Clinton, and several thousand diplomats around the world are going to have a heart attack when they wake up one morning, and find an entire repository of classified foreign policy is available, in searchable format, to the public,” Manning wrote. Wired.com could not confirm whether Wikileaks received the supposed 260,000 classified embassy dispatches.

Whistleblower Michigan Cop Files Suit Over Allegations of Fellow Cops Having Sex With Teen Ride-Along A popular Michigan police officer is suing his chief, claiming he was demoted for questioning the mishandling of an investigation about two fellow officers who allegedly had sex with a 16-year-old runaway girl. Saline police officer Don Lupi had “expressed concerns to persons in city government about two fellow officers allegedly having sexual relations with a minor female who was known to the department as a runaway (and would accompany officers on ‘ride-alongs), and her friend,” the lawsuit states. Lupi, an 18-year veteran of the department, spending 13 years as a detective, faced severe backlash after reporting the misconduct, especially since one of the parties was a sergeant and therefore his superior. “Be careful of Lupi, he’s a snake and a rat,” the suit asserts that the sergeant told other officers. “Make a mistake and he keeps it on file.” The rare good cop had also reported his coworkers in the past for falsifying their time sheets. Story continues below...

By 285 votes to 281, MEPs decide to call on EU member states to "drop any criminal charges against Edward Snowden" : worldnews