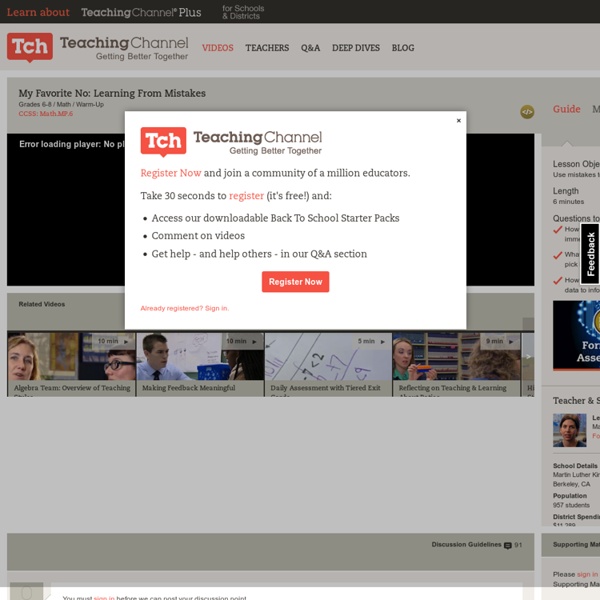 How to Give Effective Feedback, Both Positive and Negative Why is that? One reason is that as people gain expertise, feedback serves a different purpose. When people are just beginning a venture, they may not have much confidence, and they need encouragement. But experts’ commitment “is more secure than novices and their focus is on their progress,” the paper’s authors said. That, of course, is much easier said than done, which is why most of us have such trouble giving or getting critiques. We don’t want to be the bad guy. Early in her career, when she worked at Walmart, she had to tell an employee that she wasn’t doing a good job. Mr. “We say, ‘That was a great piece of work, there was just a small problem,’ ” Mr. The better way, Ms. Research bears that out. While many of us tend to hear what we want to hear, Professor Fishbach says she thinks the problem lies more with those providing the feedback. Some companies have developed their own terminology for feedback. Here’s an example he offers in his book. Continue reading the main story

Clickers in the Classroom: An Active Learning Approach Good Ideas Clickers in the Classroom: An Active Learning Approach Further research will determine whether clickers complement or surpass other active learning approaches in improving learning outcomes By Margie Martyn Current research describes the benefits of active learning approaches. Clickers provide a mechanism for students to participate anonymously. The study also investigated students' perceptions of their learning using clickers versus classroom discussion. Active Learning The benefits of active learning are widely acclaimed in higher education. A relatively new technology, clickers offer one approach to employing active learning in the classroom. Johnson4 described how clickers address three of Chickering and Gamson's seven principles for good practice in undergraduate education. actively engage students during the entire class period, gauge their level of understanding of the material being presented, and provide prompt feedback to student questions. Click image for larger view. 1.

Teacher: A student told me I ‘couldn’t understand because I was a white lady.’ Here’s what I did then. Emily E. Smith is a fifth-grade social justice and English language arts teacher at Cunningham Elementary School in Austin, Tex. She was just awarded the 2015 Donald H. Graves Excellence in the Teaching of Writing award given at the National Teachers of English Language Arts Convention in Minneapolis. Smith created and founded The Hive Society, a classroom that inspires children to creatively explore literature through critical thinking and socially relevant texts. In her speech accepting the award, Smith talked about a seminal moment in her career when she realized she needed to change her approach to teaching students of color, one of whom told her that she couldn’t understand his problems because she is white. Texas fifth-grade teacher Emily E. I’m white.

Theo Jansen visits the University of Iowa | Research and Economic Development | The University of Iowa “I like to balance between reality and imagination,” Theo Jansen said Tuesday morning during the breakfast reception of his visit to the University of Iowa. “We have to dream our lives and not just exist.” Jansen came as part of the Creative Matters lecture series sponsored by the Office of Research and Economic Development, seeking to demonstrate that creativity is not only at the core of research and discovery, but is also central to our human experience. His own life’s work is a pinnacle of this philosophy. Called a kinetic sculptor, an engineer, a landscape artist, Jansen has spent 25 years creating his Strandbeest—animals made of plastic tubes and sails, which walk on their own across the beaches of his home in the Netherlands. The Strandbeest came into conception in 1990 when Jansen wrote a newspaper column about skeletons that could build dunes on the beaches to protect the Netherlands from predicted rising sea levels. Jansen talks about the evolution of the Strandbeest.

Dividing Fractions- The Awkward Question Image via Wikipedia You are negotiating the shark invested waters of the Sea of Misconceptions which nestles itself within the vast barren plains in the province of Understanding Fractions, and you reach the point where you tell them that to divide one fraction by another you turn the second one upside down and then multiply them. The class is split. There are those pupils who accept what you said and want to get on with it and those who want to know why. In my experience the former group represents they larger proportion but nonetheless, having an answer as to why this works should be in every maths teacher’s armoury. Let me start by saying that the following explanation isn’t my own. The following explanation should be accessible to pupils who have a firm grasp of: Check out this slideshow I’ve put together below. Click here to download the resource. You can see that ‘turning the second fraction upside down then multiplying them’ is actually just a short cut for the method shown above.

Schools Need Introverted Teachers, But Avoiding Burnout a Challenge It’s generally believed that the teaching profession is better suited to extroverts. While hugely rewarding, it is exceptionally demanding, noisy, chaotic and educators are always under the microscope. But there are many introverted teachers across the country, who, as a recent article in The Atlantic concluded, are more vulnerable to burnout than their extroverted colleagues. Jessica Honard agrees. In your first year in the classroom, were you prepared for the pressures of teaching? Jessica Honard: No. What were the conditions at your school that made it particularly hard for you? JH: I loved teaching. Jessica Honard What kind of support system was in place at your school or were you more or less on your own? JH: The administration did what they could to support the teachers. You just mentioned the constant meetings and demands on your time outside of the actual classroom, which is a challenge you address in the book. As an introvert, however, I was taught to teach as an extrovert.

Downloads “’We translated some textbook pages from a Japanese math textbook,’ Stigler told me, sitting in his office in the rabbit warren that is the UCLA psychology department. ‘There was a really interesting note in the teacher’s edition, and it said: ‘The most common mistake students will make in adding fractions is that they will add the denominators.’ Then it said: ‘Do not correct this mistake. If you correct it, they will immediately stop doing it. But what you really want is for them to take several weeks to understand the consequences of adding the denominators and why that doesn’t work.’” Source Marking - A blog entitled "Marking is Broken" - Click here Excellent summary entitled Improving Written Feedback - Click here A humorous look at marking Click here Marking Policies Marking Policy of St Alban's High School - Click here Thanks to King Edward V1 in Bury St Edmunds for this policy document: Policy Document Pupil Record Sheet Marking Suggestions from other colleagues

Online Grey Noise Generator | This is great! ♥ With headphones, it's like a warm hug for your ears. ♥ As a tinnitus sufferer I have found sleep difficult and have spent many long tedious nights lying awake without relief. Then I happened upon your site one night when, in desperation, I was trying to find a masking sound that would help me get some rest. To be able to customise a sound that actually works for me has been bliss. ♥ I love putting this on underneath my mp3's - makes the nuances of certain songs sound crystal clear. ♥ I've been having trouble focusing on math work, but playing this noise is the background has helped me a lot! ♥ This noise helps me in all my activities, whether I'm trying to sleep or have a case of writers block, I can always find the noise I need! ♥ As somebody who has suffered from severe ADD throughout my entire childhood as well as my adult life, this custom sound blocks out all other noises, including my two 6 year old daughters when I am trying to get work done. ♥ This is great! ♥ Beautiful

CelebrAsian 2016 Schedule — Viking Theatre, Grand View University 2411 East 14th, Des Moines, IA Shakuntala, tells the story of a young woman, Shakuntala, who is raised in a secluded sanctuary and falls in love with a monarch, King Dushyanta, whom she meets in the forest. Kalidasa is regarded as the greatest Sanskrit poet and dramatist and Shakuntala is considered his masterpiece. In 1789, it became the first Indian play to be translated into a western language. GDT's innovativeadaptation features a multicultural approach that takes advantage of an ethnically diverse cast by fusing various art forms. For more information visit the Gateway Dance Theatre Web page.