The Shelf Life of Food (Infographic) 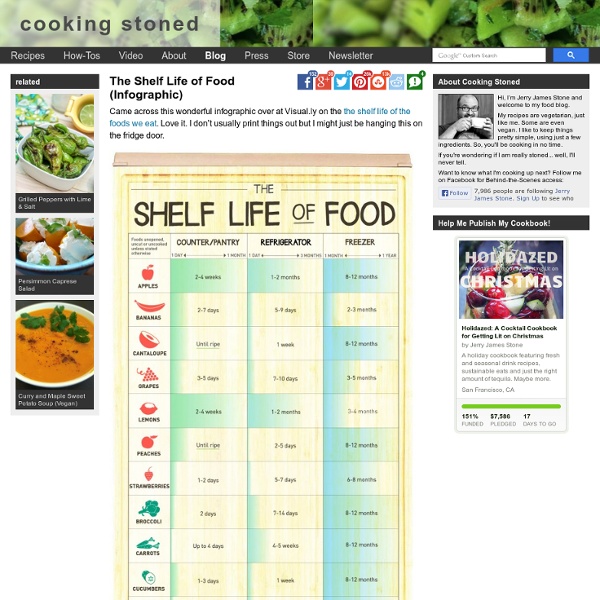 The definitive street foods of England, Denmark, and 12 other European countries When you're in a new and unfamiliar place, one of the best tools for learning about the culture is food. But you don't want fancy stuff: that's for tourists and wealthy people with expensive ascots. You've gotta go to the streets, where pizza (or whatever that country's version of pizza is) is king. Or duke. The best international fast-food items from 10 major chains Flickr/Ryan Belgium: Frites Frites were pretty much invented in Belgium (although France's claim is more stuck in the collective American consciousness), and they remain the most ubiquitous street food there. Wikipedia/Pastorius Czech Republic: Smažený sýr Sure, it may be spelled somewhat dauntingly, but there's nothing scary about this Czech street-food delicacy -- it's breaded-and-fried cheese (usually Edam). Flickr/Simon Q The world's best breakfast: which country's morning meal is tops? Wikimedia/Andrew Dunn Wikipedia/Jarno Elonen Flickr/Juan Fernandez 28 must-eat sandwiches from around the world Flickr/Jeremy Keith Thrillist

14 great restaurants that specialize in one perfect dish Some restaurants stretch themselves thin by cooking up (ugh!) multiple menu items, but others achieve excellence by specializing in one thing -- and making it perfectly. With the trend of single-item restaurants spreading across the US, we decided to pull together a list of 14 paragons of particular provisions that you've gotta check out. Now, some of these places have sides and variations of their specialties available as well, but the main attraction is where it's at. Brooklyn Kolache Co. Brooklyn Kolache Co. Xooro Xooro (California and beyond)What it's serving: "Spanish fritters", aka churrosThe deal: Described as "churros on steroids" by TheNew York Times, this California-based fast-dessert chain slings giant, gourmet filled churros like maple bacon, vanilla citrus, triple chocolate, and tiramisu to customers from Los Angeles to Qatar. The Meatloaf Bakery Johnny Casserole Cereality Yelp/Trinity T. Paul's Pel'meni Andrew Zimmer Rice to Riches Nong's Khao Man Gai Medium Rare

33 Genius Three-Ingredient Recipes | Posted by on Mar 24, 2014 in Food Hacks | 12 comments If you are looking for some New recipes, some new ideas that will make you happy, than you are on the right place. These 33 easy and amazing food recipes will make you happy and you will enjoy in your food. All you need to do is to chose one of this food ideas and try it, or you can try all of them.

Bookmark this: Recipes for 7 iconic Dallas dishes As legend would have it (and it indeed might be legend), a woman loved Neiman Marcus' famous chocolate chip cookies so much, she offered to pay for the recipe. Her waitress told her the cost would be "two fifty," and the woman agreed. Then she saw her credit card statement: $250. Yikes! That story might just be a tall, half-baked tale. But it gets at the heart of dining in Dallas: Some dishes are so exceptional, so iconic they've become part of the intricate story of Dallas. Here's a list of some of those coveted recipes. Jack Keller, owner of Dallas’ Keller’s burger restaurants, says “it’s hard to mess up a hamburger.” Keller’s family has been making burgers in Dallas for 65 years. Makes one burger Ingredients: 1 thin beef patty measuring 2.66 ounces, made with 80 percent lean, 20 percent fat 1 poppy seed bun One slice of cheese (optional) Texas 1015 onions, sliced Lettuce, shredded Tomato, sliced Dill pickle, sliced for sandwiches Slather of Red Boy mustard Source: Jack Keller

Tiramisu French Toast I have very important news. I bought some bread. It was not whole wheat. It was delicious. And fluffy. Then I invested in some cheese. And for the shocking finale, I picked up some butter. Butter. It’s what I walked into the kitchen some 20 years ago and found my brother eating, fingerful by fingerful, perched on the kitchen table. True story. It’s what I live and breathe by. [I say that like you haven’t noticed. ] And it’s also what this French toast took a bath in last week. Now that is a bath I’d like to have. You probably weren’t expecting such a decadent breakfast on a Monday morning. It’s just your basic build-it-yourself French toast. No excuses. Tiramisu French Toast serves 4 1 loaf challah bread 8 whole eggs 1/4 cup cream 1 tablespoon vanilla extract 1 cup mascarpone cheese 1/2 teaspoon cinnamon 1 tablespoon instant coffee powder 1/2 tablespoon cocoa powder 1/2 tablespoon sugar 1 tablespoon honey 4 tablespoons butter maple syrup for serving sliced strawberries for serving [P.S.

100 Greatest Cooking Tips (of all time!) : Chefs 1. Remember, y'all, it’s all about the prep. Take away the stress by doing the prep the night or day before. You'll look like a star.Paula Deen Paula’s Best Dishes 2. 3. 4. 5. 6. 7. 8. 9. 10. Classic Recipe: Beef Bourguignon With Farfalle – 12 Tomatoes Proper 12T 12tomatoes_belowtitle Beef Bourguignon is a typical French meal that is a delicious beef stew, cooked in red wine, that comes from the Burgundy region of France. It originated as a peasant dish, but has risen to a level of popularity and is now considered something of an elegant meal. (Possibly due to the amount of time needed to prepare it and its bold flavor.) This dish takes some love and affection, but it is definitely worth it. Classic Beef Bourguignon 30min to prepare, Serves 6-8 Ingredients 3 pounds stew beef, cubed 1 pound farfalle bow-tie pasta 2-3 cups beef stock 3 cups red wine (cabernet) 5 carrots, chopped 4 slices bacon, cut into strips 4 cloves garlic, minced 2 onions, finely chopped 2 bay leaves 3 tablespoons all-purpose flour 2 tablespoons extra-virgin olive oil 1 tablespoon tomato paste 1 teaspoon dried thyme 1/2 teaspoon rosemary 1/2 teaspoon cloves kosher salt and freshly ground pepper, to taste Preparation Preheat oven to 450 F. Recipe adapted from I Love Pasta

Maghrebi mint tea Maghrebi mint tea is a green tea with mint leaves and other ingredients. It is part of Maghreb culture. The tea has spread throughout North Africa, parts of the Sahel, and southern Spain. Tea occupies a very important place in the culture of Morocco and is considered an art form. Maghrebi-style mint tea is served all through the Maghreb (North Africa). Algeria, Morocco, and Tunisia are the countries where it is most often drunk. Origins[edit] It is believed that green tea (gunpowder tea) was first introduced by the English to the Maghreb in the 18th century, and began spreading through the country in the mid-19th century at the time the trade between the Maghreb and Europe started flourishing. The main provider of tea to the Maghreb remains China. Preparation[edit] The method of preparation of atai is relatively complex and varies from region to region. Mint tea being served. The typical green tea used is a gunpowder tea variety imported from China. See also[edit] References[edit]

Season This With That: A Quick Guide to Common Spices for Common Dishes As the resident food lover in my family, I often get panicked 5pm phone calls asking how to season a bowl of steamed veggies or what can replace thyme or if there's a way to make this chicken taste less boring. While there is really no "One Right Way" to season or spice your favorite foods, here's a quick guide to some of the most common — and dependably tasty! — ways to do it. A Million Ways to Roast a Chicken When given the choice between fresh herbs and dried herbs, fresh herbs are going give you better flavor every time. I included several spice mixes here because they are convenient for seasoning a quick weeknight meal and also because they can be good gateways into new ways to spice your food. Think of this guide and the seasonings I suggest as a starting place. What particular herbs and spices do you like to use when seasoning your favorite foods? Teeny Tiny New Potatoes with Lemon A Reference Guide to Common Spices for Common Dishes Chicken Fish Pork Beef Lamb Potatoes