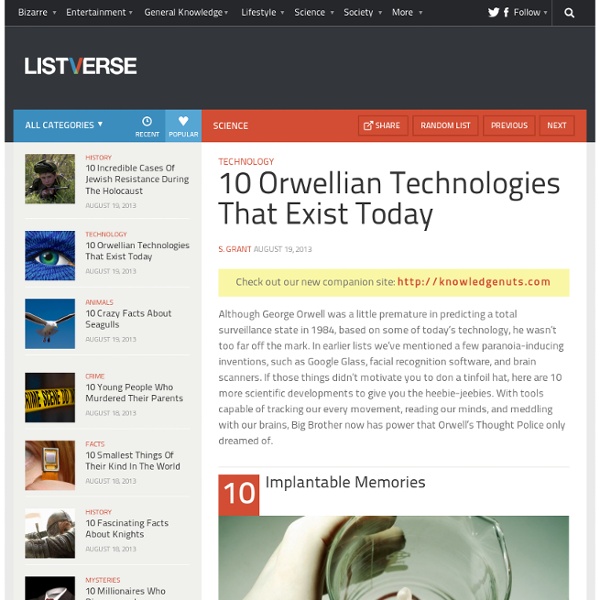 Technology Although George Orwell was a little premature in predicting a total surveillance state in 1984, based on some of today’s technology, he wasn’t too far off the mark. In earlier lists we’ve mentioned a few paranoia-inducing inventions, such as Google Glass, facial recognition software, and brain scanners. 10 Implantable Memories After the disclosures from government whistleblowers such as Manning and Snowden, most of us realize anything we say, do, or look at online is subject to monitoring by a third party. The scientists have already successfully inserted false memories into mice by using optogenetics to turn individual brain cells “on and off.” While toying with the memories of mice is one thing, what happens when the technology inevitably expands to humans? 9Power To See Through Walls Apparently the scientists at MIT have a fascination with Orwellian technology, because in addition to figuring out how to manipulate memories, they’ve also designed a way to “see” through walls.

13 quotes from George Orwell's 1984 that resonate more than ever One of the most influential dystopian novels ever written, 1984 has had a profound effect on the world. Since its publication in 1949 many of its concepts have entered modern day parlance. Big Brother, doublethink, thoughtcrime, Newspeak and Room 101 are all part of Orwell’s world. What’s more, as a result of the book, Orwellian is now a term to describes official deception, secret surveillance, and manipulation of the past by a totalitarian or authoritarian state. Orwell hoped that by writing 1984 he’d help stop such a state ever coming to pass. Read these thirteen quotes to decide for yourself. “If you want to keep a secret, you must also hide it from yourself.” “He who controls the past controls the future. “If you want a picture of the future, imagine a boot stamping on a human face—for ever.” “War is peace. “Big Brother is Watching You.” “Doublethink means the power of holding two contradictory beliefs in one’s mind simultaneously, and accepting both of them.”

We Don't Need Censorship to Protect Children The United Nation’s Internet Governance Forum took place in Baku, Azerbaijan November 6-9 I spent last week in Baku, Azerbaijan, where I spoke at the Internet Governance Forum, a United Nations conference for representatives of governments, industry and nonprofit groups to discuss Internet policy issues. It’s not a rule making body but a forum for conversation where every delegate — including young people from several countries — exchange views on how — or whether — to “govern” the Internet. Some would impose regulations Most speakers, including U.S. Even though the Internet evolved from work funded by the U.S. It was around 1994, after the release of Mosaic — the first easy to use Web browser — that the commercial Internet began to take off. Russian law not the answer Ironically, just as the Internet Governance Forum was getting underway, Russia started enforcing a controversial new law that would allow the government to ban or block websites with objectionable material.

10 Most Censored Countries The 2015 list of 10 Most Censored Countries is part of CPJ's annual publication, Attacks on the Press. Eritrea and North Korea are the first and second most censored countries worldwide, according to a list compiled by the Committee to Protect Journalists of the 10 countries where the press is most restricted. The list is based on research into the use of tactics ranging from imprisonment and repressive laws to harassment of journalists and restrictions on Internet access. In Eritrea, President Isaias Afewerki has succeeded in his campaign to crush independent journalism, creating a media climate so oppressive that even reporters for state-run news outlets live in constant fear of arrest. The threat of imprisonment has led many journalists to choose exile rather than risk arrest. Fearing the spread of Arab Spring uprisings, Eritrea scrapped plans in 2011 to provide mobile Internet for its citizens, limiting the possibility of access to independent information.

Banned Books Online presents Welcome to this special exhibit of books that have been the objects of censorship or censorship attempts. The books featured here, ranging from Ulysses to Little Red Riding Hood, have been selected from the indexes of The Online Books Page. (See that page for more than 2 million more online books!) This page is a work in progress, and more works may be added to this page over time. Books Suppressed or Censored by Legal Authorities Ulysses by James Joyce was selected by the Modern Library as the best novel of the 20th century, and has received wide praise from other literature scholars, including those who have defended online censorship. In 1930, U.S. John Cleland's Fanny Hill (also known as Memoirs of a Woman of Pleasure) has been frequently suppressed since its initial publication in 1749. The Comstock law also forbade distribution of birth control information. Jean-Jacques Rousseau's autobiography Confessions was banned by U.S. D. Unfit for Schools and Minors? John T.

Extract Quote from Huffpost Media on Censorship The internet and pornography: Prime Minister calls for action - Speeches Thank you to the NSPCC for hosting me today and thank you for all the amazing work you do for Britain’s children. Today I am going to tread into territory that can be hard for our society to confront. It is frankly difficult for politicians to talk about, but I believe we need to address as a matter of urgency. I want to talk about the internet, the impact it’s having on the innocence of our children, how online pornography is corroding childhood and how, in the darkest corners of the internet, there are things going on that are a direct danger to our children and that must be stamped out. Now, let me be very clear right at the start: the internet has transformed our lives for the better. But because of this, the internet can sometimes be given a sort of special status in debate. And against this mind-set, people’s, most often parents’, very real concerns get dismissed. Now, let me be clear, the 2 challenges are very distinct and very different. But government needs to do more.

What are the advantages and disadvantages of Censorship. - A-Level Sociology - Marked by Teachers.com Extracts from this document... Introduction The censorship debate is a long one, and the numbers seem to be equally divided between both sides. Middle Violence has become a major issue in these conflicts. Conclusion when something appears on it that falls in to the latter category. The above preview is unformatted text This student written piece of work is one of many that can be found in our AS and A Level Media section.

Mass media Media technologies that are intended to reach a large audience by mass communication Broadcast media transmit information electronically via media such as films, radio, recorded music, or television. Digital media comprises both Internet and mobile mass communication. Internet media comprise such services as email, social media sites, websites, and Internet-based radio and television. Many other mass media outlets have an additional presence on the web, by such means as linking to or running TV ads online, or distributing QR Codes in outdoor or print media to direct mobile users to a website. The organizations that control these technologies, such as movie studios, publishing companies, and radio and television stations, are also known as the mass media.[4][5][need quotation to verify] Issues with definition In the late 20th century, mass media could be classified into eight mass media industries: books, the Internet, magazines, movies, newspapers, radio, recordings, and television. Film

Arab Mass Media: Newspapers, Radio, and Television in Arab Politics - William... Since September 11, 2001, and the wars in Afghanistan and Iraq, many television viewers in the United States have become familiar with Al Jazeera as offering an alternative take on events from that presented by mainstream U.S. media, as well as disseminating anti-American invective. Westerners have tended toward simplistic views of Arab newspapers, radio, and television, assuming that they are all under government control and that freedom of press is non-existent. William A. Although governmental influence over the media is stronger in the Middle East than in Europe or the United States, Rugh argues that there is more diversity in the Arab media than most people in the West realize.

Haunting Illustrations for Orwell’s Nineteen Eighty-Four, Introduced by the Courageous Journalist Who Broke the Edward Snowden Story Few things in creative culture are more enchanting than an artist’s interpretation of a beloved book. There is Maurice Sendak’s rare and formative art for William Blake’s “Songs of Innocence,” William Blake’s paintings for Milton’s Paradise Lost, Picasso’s 1934 drawings for a naughty ancient Greek comedy, Matisse’s 1935 etchings for Ulysses, and Salvador Dalí’s literary illustrations for Cervantes’s Don Quixote, Dante’s Divine Comedy, Shakespeare’s Romeo and Juliet, and the essays of Montaigne. Since 1947, The Folio Society has served as the premier patron saint of such contemporary cross-pollinations of great art and great literature. In the introduction, Guardian editor-in-chief Alan Rusbridger — who broke the Edward Snowden story in a masterwork of journalism and stood up to real-life Big Brother by refusing to hand over Snowden’s data to the government — explores the parallels, contrasts, and essential civic discourse springing from the difference between the two camps: