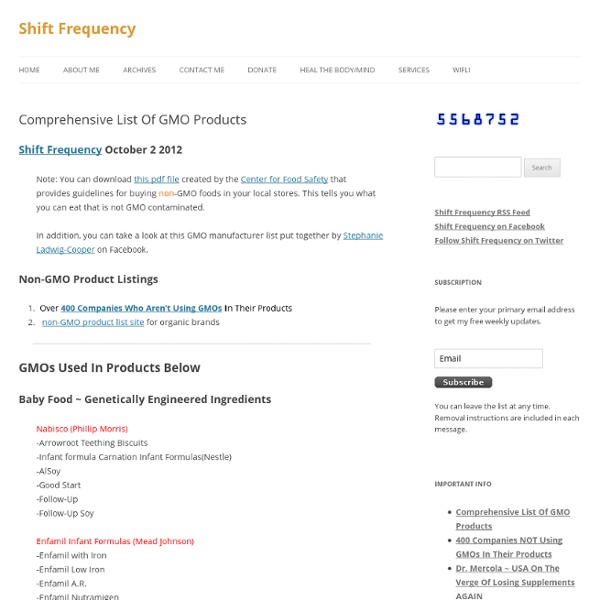 Shift Frequency This list was compiled based on information verified at time of publication. Since then changes in corporate ownership and/or market-driven changes have caused modifications to the practices of a few of the corporations listed below. Please visit this Non-GMO Product Listing site for the most up-to-date, tested and verified organic product listing. Note: You can download this pdf file created by the Center for Food Safety that provides guidelines for buying non-GMO foods in your local stores. This tells you what you can eat that is not GMO contaminated. In addition, you can take a look at this GMO manufacturer list put together by Stephanie Ladwig-Cooper on Facebook. Non-GMO Product Listings Baby Food ~ Genetically Engineered Ingredients Nabisco (Phillip Morris) -Arrowroot Teething Biscuits -Infant formula Carnation Infant Formulas(Nestle) -AlSoy -Good Start -Follow-Up -Follow-Up Soy Enfamil Infant Formulas (Mead Johnson) -Enfamil with Iron -Enfamil Low Iron -Enfamil A.R. Mrs. Related:  Food

Food investigations: Welch's fruit juice cocktails contain more corn than fruit: 80% water and high fructose corn syrup (NaturalNews) If you buy fruit juices at your local grocery store, you might notice the Welch's brand juices sold in refrigerated cartons. Welch's calls them "refrigerated cocktails" and offers exotic-sounding flavors like Strawberry Peach, Dragon Fruit Mango Cocktail and Orange Pineapple Apple. These products are aggressively marketed with pictures of splashy fruit and loud label claims like "Fruity and Refreshing!" But what Welch's doesn't reveal anywhere except in the fine print on its ingredients label is that these juice cocktails contain more high fructose corn syrup than fruit. In fat, they contain so much high fructose corn syrup that the front label should actually show chunks of corn rather than the fruit they currently depict. Is this corn syrup derived from GMO corn? A Natural News investigation concludes that Welch's refrigerated cocktails are deceptively labeled and marketed. No mention of corn. It reads: Nowhere does the product claim to be free of GMOs. Corn is not a fruit.

Eerie Abandoned Islands (PHOTOS) - weather.com - Pale Moon Hashima Island, Nagasaki Prefecture, Japan Next Beautiful and secluded, thousands of islands serve as vacation getaways. Commonly called Gunkanjima, Hashima Island in Nagasaki prefecture in Japan will be familiar to James Bond fans. NEXT: An island in Scotland abandoned due to extreme weather GMO alert: Eating GM wheat may destroy your liver, warn scientists (NaturalNews) Genetically engineered wheat contains an enzyme suppressor that, when consumed by humans, could cause permanent liver failure (and death). That's the warning issued today by molecular biologist Jack Heinemann of the University of Canterbury in Australia. Heinemann has published an eye-opening report that details this warning and calls for rigorous scientific testing on animals before this crop is ever consumed by humans. The enzyme suppressor in the wheat, he says, might also attack a human enzyme that produces glycogen. Consumers who eat genetically modified wheat would end up contaminating their bodies with this enzyme-destroying wheat, causing their own livers to be unable to produce glycogen, a hormone molecule that helps the body regulate blood sugar metabolism. "We found over 770 pages of potential matches between these two genes in wheat and the human genome," he continued. In today's corporate-run quack science agricultural system, YOU are the human guinea pigs.

How Government Cover-Up on Fish Farming Affects Your Health For related articles and more information, please visit OCA's Health Issues page and our Food Safety Research Center page. Many environmental experts have warned about the unsustainability of fish farms for a decade now, and we have documented those objections in many previous articles. Unfortunately nothing has yet been done to improve the system. As usual, government agencies and environmental organizations around the world turned a blind eye to what was predicted to become an absolute disaster, and now the ramifications can be seen across the globe, including in British Columbia, Canada. Salmon Confidential is a fascinating documentary that draws back the curtain to reveal how the Canadian government is covering up the cause behind British Columbia's rapidly dwindling wild salmon population. A summary of the film reads: Tracking viruses, Morton moves from courtrooms, into British Columbia's most remote rivers, Vancouver grocery stores and sushi restaurants.

'Century Chest' Time Capsule Opened In Oklahoma After 100 Years (VIDEO) - Pale Moon After a century-long wait, a treasure trove of goodies from the 1910s was discovered this week when a time capsule was dug up and opened in an Oklahoma church. According to Fox 25 News, the aptly-named "Century Chest" has been sitting, entombed under 12 inches of concrete, in the basement of Oklahoma City's First Lutheran Church for the past 100 years. The vintage copper chest was painstakingly buried by the church's Ladies Aide Society in 1913, the Oklahoman reports. It was finally unveiled to the public on Monday after being removed from the ground. It reportedly took a construction company a whopping 11 hours to unearth the container. When the "Century Chest" was cracked open, the crowd that had gathered oohed and aahed as a collection of incredibly well-preserved artifacts was pulled from the time capsule, the Oklahoma Gazette reports. “This is more than we could have hoped for,” Oklahoma History Center research director Chad Williams told the Oklahoman of the incredible collection.

New Study Links Genetically Engineered Corn to Infertility 1. New study confirms GM food damages fertility - GM Free Cymru 2. Austrian study shows GM corn negatively affects reproductive health in mice - Austrian Agency for Health and Food 3. Monsanto's statement on safety allegations related to transgenic maize NK603 X MON 810 --- --- 1. New study confirms that GM food damages fertility GM Free Cymru, 12 November 2008 In a new Austrian study that will send shock waves through the corridors of power in the EU, and through the offices of the GM corporations, it has been discovered that GM corn has a damaging effect upon the reproductive system (1). The work was done at the request of the Austrian Health Ministry, and the results were presented yesterday by Professor Jurgen Zentek and his team to an expert conference organized by the Austrian Agency for Health and Food Safety. ENDS Contact: Dr Brian John Tel 01239-820470 (6) (9) Benn backs GM food safety News | 10 November, 2008.

Ban Monsanto’s Seed Patents in Europe Target: Benoît Battistelli, President of the European Patent Council Goal: End Monsanto’s seed patents in Europe to protect farmers’ livelihoods, as well as people’s health Monsanto is a publicly traded multinational corporation that manufactures genetically modified food. In the past, it manufactured the deadly insecticide DDT and the chemical warfare defoliant Agent Orange, which is estimated to have killed or maimed over 1 million people. At present, Monsanto owns over 90% of patents on genetically engineered seeds, which means it more or less controls the mainstream food supply. The vast majority of crops are genetically modified. Monsanto’s patent monopoly on crops makes it difficult for farmers to avoid buying them. President Obama just passed a law forcing the Agriculture Department to approve Monsanto’s genetically modified crops. Urge the European Patent Council to outlaw Monsanto’s patents on seeds in the European Union. Dear Mr. Genetically modified foods are also dangerous.

'Sirius' Documentary Reveals DNA Test Results On Ata, The '6-Inch Alien' - Pale Moon The mummified remains of what looks like a 6-inch space alien has turned "Sirius" into the most eagerly awaited documentary among UFO enthusiasts. The findings, however, might come as a disappointment. In early publicity, filmmakers claimed the documentary would reveal that the DNA of the creature with an oversized alien-looking head couldn't be medically classified. In fact, the film, which premiered Monday in Hollywood, features a scientist who concluded the little humanoid was human. "I can say with absolute certainty that it is not a monkey. "The DNA tells the story and we have the computational techniques that allows us to determine, in very short order, whether, in fact, this is human," Nolan, who performed the DNA tests, explains in the film. "Sirius" focuses on the remains of the small humanoid, nicknamed Ata, that was discovered in Chile's Atacama Desert 10 years ago and has, literally, gone through different hands and ownership since then. Loading Slideshow

100 Simple Nutrition Tips “Man Is What He Eats” – Lucretius Good nutrition is one of the most important factors for good health. You can dramatically improve your health by doing simple adjustments to your eating habits. You’ll notice a big difference in your energy levels if you regularly eat foods that have a lot of vitamins and minerals in them, such as fruits, vegetables, whole grains and low- or non-fat dairy. There is no doubt that eating well can maximize our life experience. One of the best resources that I’ve found on the topic of health and well-being is “8 Weeks To Optimum Health” by Dr. I urge you to get a copy today and start following Dr. Do you have more nutrition tips that you can share with us? Find your passion and what matters most to you in less than 30 minutes using … The P.A.S Technique 2.0: The World’s Easiest Way To Find Your Passion and Purpose In Life? For more simple living tips follow me on Twitter @MidSimplicity *Photo Credit: by Pink Sherbet Photography