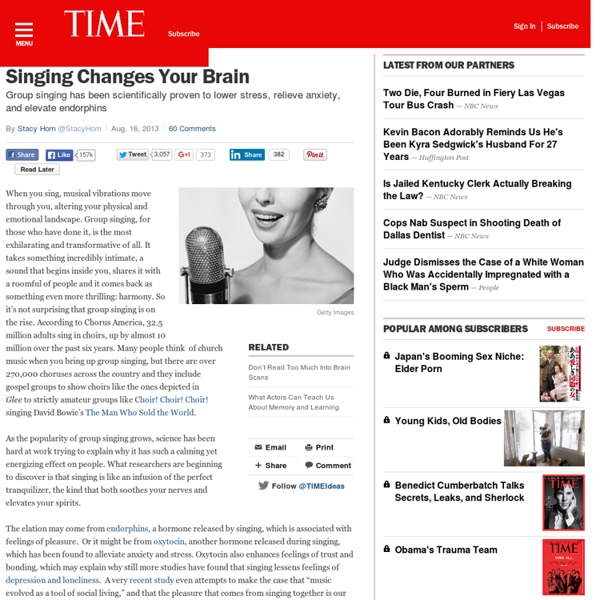 When you sing, musical vibrations move through you, altering your physical and emotional landscape. Group singing, for those who have done it, is the most exhilarating and transformative of all. It takes something incredibly intimate, a sound that begins inside you, shares it with a roomful of people and it comes back as something even more thrilling: harmony. So it’s not surprising that group singing is on the rise. As the popularity of group singing grows, science has been hard at work trying to explain why it has such a calming yet energizing effect on people. The elation may come from endorphins, a hormone released by singing, which is associated with feelings of pleasure. The benefits of singing regularly seem to be cumulative. It turns out you don’t even have to be a good singer to reap the rewards.

Why Music Makes Our Brain Sing - NYTimes.com Photo Gray Matter By ROBERT J. ZATORRE and VALORIE N. SALIMPOOR MUSIC is not tangible. In the modern age we spend great sums of money to attend concerts, download music files, play instruments and listen to our favorite artists whether we’re in a subway or salon. So why does this thingless “thing” — at its core, a mere sequence of sounds — hold such potentially enormous intrinsic value? The quick and easy explanation is that music brings a unique pleasure to humans. More than a decade ago, our research team used brain imaging to show that music that people described as highly emotional engaged the reward system deep in their brains — activating subcortical nuclei known to be important in reward, motivation and emotion. But what may be most interesting here is when this neurotransmitter is released: not only when the music rises to a peak emotional moment, but also several seconds before, during what we might call the anticipation phase. Why the auditory cortex?

11 Reasons You Should Go Outside Top 12 Brain-Based Reasons Why Music as Therapy Works “Our bodies like rhythm and our brains like melody and harmony.”-Daniel Levitin There are over 5,000 board-certified music therapists in the United States. And there’s one question we get asked daily: What is music therapy? According to the American Music Therapy Association, “Music Therapy is the clinical and evidence-based use of music interventions to accomplish individualized goals within a therapeutic relationship by a credentialed professional who has completed an approved music therapy program.” Simply put, we use music to make your life better. What’s more interesting, though, is why it works. So here are my top 12 brain-based reasons why music works in therapy: Music is a core function in our brain. If you enjoyed this article and are interested in learning more, I’d recommend the following books and websites:

The Death of the Raw Food Diet “Cooked Food is Not a Sin” Uncle Jethro Raw The raw food diet, as a massive craze that took over the world for over ten years and convinced hundreds of thousands of people — possibly millions — to give up cooking and eat only fruits, vegetables, nuts and seeds — is dead, my friends. It died a peaceful death this year. While it’s hard to say when the raw food diet craze officially expired, a good guess would be on April 23rd, 2013, at around 9:30 p.m. At that time, the last remaining raw food guru who claimed to eat a 100% raw food diet without lying about it decided it was time to live a little. The History of the Raw Food Movement The concept of eating raw food is not new. If we go back to the Ancient world, we’ll find that the Greeks and Romans were ahead of their time in that regard. Throughout the ages, the word “vegetarian” was practically synonymous with “high raw diet.” In ancient times, there was no tofu, noodles or other vegetarian-labeled fares. Sylvester Graham (1794-1851) Dr.

Let’s rock! Even newborns can follow a rhythm - Health - Children's health | NBC News Newborns can follow a rhythm, a new study has found, suggesting rocking out is innate. The finding, published in the Jan. 26 issue of the journal Proceedings of the National Academy of Sciences, adds to growing evidence that the newborn brain is not the blank slate it was once thought to be. Rather, scientists have shown, at birth we already have sophisticated methods for interpreting the world. Discrimination may be crude, explained lead researcher István Winkler of the Hungarian Academy of Sciences in Budapest, but "the basic algorithms are in place already." This may be particularly true when it comes to sound. Newborns can't exactly swing their hips to prove they can jive, so Winkler and his colleague Henkjan Honing of the University of Amsterdam monitored the brains of 14 infants listening to variations of a rock rhythm — complete with drum, snare and high hat cymbal. Infants can perceive anger, happiness and sadness from a caregiver's cooing and baby babble, he said.

Customer Reviews: The 80/10/10 Diet This is your Brain on Music | Neurotic Physiology Sci will admit I spent most the time "preparing" for this post by listening to LOTS of music. This is your brain: (Source) Is this your brain on Music? (Source) Well, to be entirely honest...probably not. So, let's start out with a little bit of a musical "high": (ahhhhhh, that's the stuff) Salimpoor, et al. Whenever I do outreach to kids in schools about drug research and drugs in the brain, we end up talking about "natural" highs. The idea is this: humans find a lot of things pleasurable. (Dopamine system is in Blue, image is from NIDA) The nucleus accumbens is mostly studied for the way dopamine signals within it change in response to drugs like cocaine or amphetamine. ...and music. To see how much of an effect (and in what time the effect worked) music has on the brain, the authors of this study recruited people who responded strongly to music. They took people who got "chills" when listening to music, and unlike other studies, they had them bring their music IN. Time for pretty pictures.

How Much Protein Do You Really Need? The Official Position Of The International Society Of Sports Nutrition. The Official Position Of The International Society of Sports Nutrition. The following seven points related to the intake of protein for healthy, exercising individuals constitute the position stand of the Society. They have been approved by the Research Committee of the Society. Vast research supports the contention that individuals engaged in regular exercise training require more dietary protein than sedentary individuals. High Protein Intakes Are Not Detrimental To KidneyFunction Or Bone Metabolism In Healthy, Active Persons. Protein Intake Recommendations Controversy has existed over the safety and effectiveness of protein intake above that currently recommended. The current recommended level of protein intake (0.8 g/kg/day) is estimated to be sufficient to meet the need of nearly all (97.5%) healthy men and women age 19 years and older. Protein recommendations are based upon nitrogen balance assessment and amino acid tracer studies. Safety Of Protein Intakes Higher Than RDA The U.S.