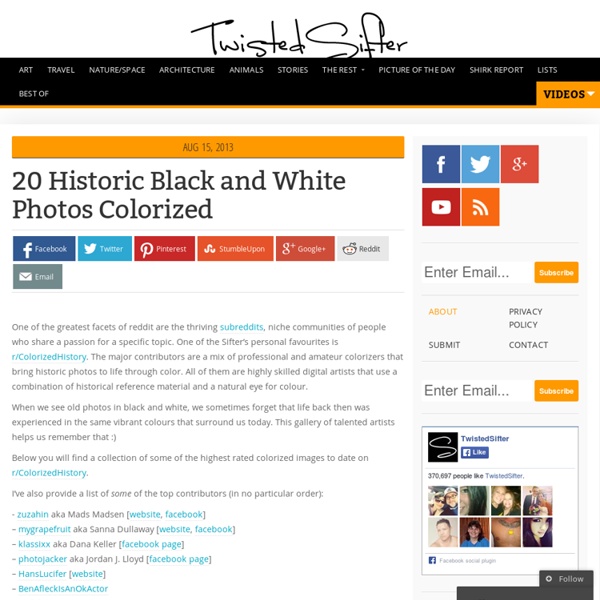 One of the greatest facets of reddit are the thriving subreddits, niche communities of people who share a passion for a specific topic. One of the Sifter’s personal favourites is r/ColorizedHistory. The major contributors are a mix of professional and amateur colorizers that bring historic photos to life through color. All of them are highly skilled digital artists that use a combination of historical reference material and a natural eye for colour. When we see old photos in black and white, we sometimes forget that life back then was experienced in the same vibrant colours that surround us today. This gallery of talented artists helps us remember that :) Below you will find a collection of some of the highest rated colorized images to date on r/ColorizedHistory. I’ve also provide a list of some of the top contributors (in no particular order): 1. 2. 3. 4. 5. 6. 7. 8. 9. 10. 11. 12. 13. 14. 15. 16. 17. 18. 19. 20.

BBC Arts & Culture - Vivian Maier: lost art of an urban photographer 25 June 2013Last updated at 10:15 By Jill Nicholls Director, BBC One imagine A web-exclusive clip in which Vivian Maier's French friend Nelly Richebois talks about Vivian's outcast, impoverished grandfather and about their youthful friendship. She's been called 'the greatest photographer you've never heard of'... the mysterious Vivian Maier, a nanny based in Chicago who took about 150,000 photographs in her lifetime and stashed them away, not showing them to anyone. She left thousands not even developed, and most as negatives from which she never made prints. It was sheer accident that her life's work was discovered. 20 Photos That Change The Holocaust Narrative Victims. Helpless. Downtrodden. That’s the narrative that’s been spread about Jews for the last 70 years since the Holocaust. We’ve embraced it to our detriment.

Stormtrooper, Donald Duck, and More This is the latest (2013) sketchbook drawings of French illustrator Pez . His work is done with different grades of pencils, and it is amazing the three-dimensionality. See also: “ Drawings Come to Life ” and “ 3D Drawings .”

TV review: Imagine: Vivian Maier – Who Took Nanny's Pictures? BBC1; Secrets from the Workhouse. ITV - Reviews - TV & Radio Maier spent most of her life working as a nanny for prosperous Chicago families, taking photographs assiduously both on and off-duty. With no home of her own she filed them away in rented storage and when she couldn't afford to pay the bills during a period of ill-health a dealer called Roger Gunderson brought five lockers, sight unseen. After the images started to appear on eBay and online blogs devoted to street photography, serious galleries began to get interested and her reputation built. Now vintage prints of her pictures sell for up to $8,000. Gunderson's haul consisted of around 150,000 photographs, though he sold them on for a fraction of their current worth. Judging from the selection you saw here, Maier had an instinctive eye.

A glimpse inside a Pinball Factory We all know the arcade game Pinball. In this gallery we take a little peek at the Stern Pinball factory in Melrose Park, just outside Chicago. According to Stern Pinball, they are the only makers of arcade quality pinball machines in the world and produce about 10,000 machines annually, which are shipped all over the world. 1A worker assembles a pinball machine at Stern Pinball in Melrose Park, just outside Chicago. Photographer Niki Feijen's eerie images of the abandoned farm houses Photographer Niki Feijen specialises in urban exploration; capturing boarded-up buildings and decaying farm housesImages reveal furniture and clothes that remain in decaying homes where owners have long since departed By Kerry Mcdermott Published: 09:07 GMT, 30 April 2013 | Updated: 06:57 GMT, 1 May 2013

How to Create 3D Type in Perspective in Illustrator CS6 In this tutorial you will learn to create 3D Typography using the Perspective Tool, Blends and some of the new features of Adobe Illustrator CS6. Step 1 Start by creating the text or shapes in 2D. This particular effect works best with bolder text with a wider surface area. If you are using text it is important that you Right Click > Create Outlines to change the font to paths. I have created my own font created using the Rectangle Tool (M) and the Pathfinder tools (Shift+Ctrl+F9).

Henri Cartier-Bresson: Living and Looking The journalist and filmmaker Sheila Turner-Seed interviewed Henri Cartier-Bresson in his Paris studio in 1971 for a film-strip series on photographers that she produced for Scholastic. After her death in 1979 at the age of 42, that interview, along with interviews that Ms. Turner-Seed had conducted with Bruce Davidson, Cornell Capa, Lisette Model, W. Eugene Smith, Don McCullin and others, sat like a time capsule in the archives of the International Center of Photography in New York. That is, until 2011, when Ms. Memories of the 1950s geisha: Stunning photos celebrate how the ancient oriental art of the hostess found its place in modern Japan As early as late 600s Japan there have been 'female entertainers'Traditional geisha emerged in the 18th centuryThese photographs of 1950s geisha show women in a more modern world By Martha De Lacey Published: 11:34 GMT, 17 July 2013 | Updated: 17:29 GMT, 17 July 2013 As early as late 600s Japan there have been 'female entertainers' hosting gatherings, pouring sake and offering company to men. Known as 'saburuko' - translated as 'serving girls' - some of these women sold sexual services, while others simply hosted high-class occasions. And around 794 the culture of the geisha began to emerge: women who men would visit for romantic and sexual pleasure.

Famous Photogs Pose With Their Most Iconic Images Jeff Widener holds his photo of Tank Man in Tienanmen Square from 1989.Photo: Tim Mantoani Steve McCurry holds his 1984 photo of a young woman from Peshawar, Pakistan. "I looked for this girl for 17 years and finally found her in 2002. Her name is Sharbat Gula."Photo: Tim Mantoani Neil Leifer holds his photo, Ali vs. Liston, which he took on May 25, 1965 in Lewiston, Maine.Photo: Tim Mantoani Bill Eppridge stands with his photo of Robert F. Kennedy after his assassination on June 5, 1968.Photo: Tim Mantoani Elliot Erwitt: "The picture I am holding was snapped in 1974 just across the street from my apartment in New York's Central Park. Stumblers Who Like Most Amazing Miniature Food Artworks by Shay Aaron Shay Aaron is a brilliant artist from Israel who makes the most astonishing miniature food jewelry. These foodstuffs look so beautiful that we would desire to eat them. Actually, there’s a whole market out there for miniature food. Not actual stuff you can eat, but beautifully hand made designs of steaks, burgers, pies, vegetables, eggs and pretty much food artworks you can think of. Comments