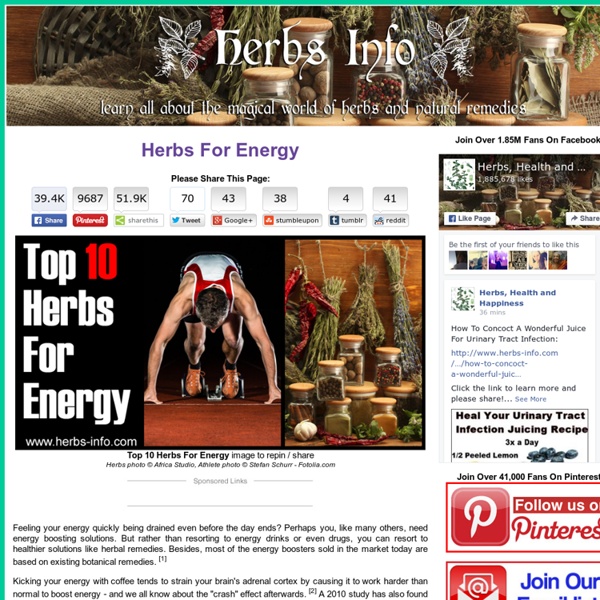 Please Share This Page: Top 10 Herbs For Energy image to repin / shareHerbs photo © Africa Studio, Athlete photo © Stefan Schurr - Fotolia.com Feeling your energy quickly being drained even before the day ends? Perhaps you, like many others, need energy boosting solutions. But rather than resorting to energy drinks or even drugs, you can resort to healthier solutions like herbal remedies. Besides, most of the energy boosters sold in the market today are based on existing botanical remedies. [1] Kicking your energy with coffee tends to strain your brain's adrenal cortex by causing it to work harder than normal to boost energy - and we all know about the "crash" effect afterwards. [2] A 2010 study has also found caffeine-based energy drinks to be typically loaded with sugar and carbohydrates and are even erroneously marketed as reversing alcohol related impairments such as motor coordination and visual reaction time, providing consumers a false sense of control. [3] [4] Ginseng Green tea Cacao

12 Ways to Get Rid of Gas & Bloating Share Let’s be straightforward. This is a page about gas, so, that’s what it’s going to sound like it’s about. No dancing around the subject matter, no putting things tentatively, no shame, no giggling…ok a little giggling is fine. 10 Steps to Starting a Community Garden In Vancouver, developers discovered that turning their vacant lots into community gardens while they waited for their next project to be ready could save them hundreds of thousands of dollars in city taxes. Putting a garden on a commercially zoned site allows it to be reclassified as public park or garden, resulting in an 80% tax saving — even if it is known that the garden is temporary. In one downtown property where a hotel parking lot was converted to an urban farm, the property owner is saving $132,000 a year in taxes.

Herbs For Menopause Herbs For Menopause - image to repinHerbs background photo - © viperagp - Fotolia.com Please share this page: Google + StumbleUpon Reddit Pharmacist Uncovers Healing Powers of Native Plants James Adams is a pharmacologist and USC School of Pharmacy associate professor. He also happens to be a trained Chumash healer. Though he doesn’t possess a drop of Native American blood from the Chumash tribe, you could say Adams’ passion for natural remedies flows in his veins. His ancestor William Adams, a surgeon and Virginia settler, embraced the healing practices of Native Americans in the 1630s when medical supplies from England were scarce.

Moles and apple cider vinegar One of the things about getting older, is that you discover new things about yourself. Like for example, the mole I had growing on the left side of my head, just below my hair line. It never really drew my attention until my hairline started to recede a little. Initially, it was smooth and mostly flat, but over time it became dry and scaly, and with these changes, it got bigger and bigger, about the size of a pencil eraser.

feed the whole neighborhood — for free The Beacon Food Forest is giving away dozens of strawberry plants. For free. It’s a drizzly, chilly, gray Saturday, typical of January in Seattle. In just a few hours, the Seahawks will host the Packers for the NFC Championship. While the rest of the city slugs its first tailgate beer of what will become an epic afternoon of football, 60 or so unpaid farmhands are hard at work. They wheelbarrow wood chips, prune pear trees, and remove invasive species from the hillside urban garden, preparing it for spring.

Six natural alternatives to ibuprofen - Phoenix Alternative Medicine The saying used to be, “Take two aspirin and call me in the morning,” but many people turn to ibuprofen to relieve inflammation, pain, and fever. This nonsteroidal anti-inflammatory drug (NSAID), available both over the counter and by prescription, is commonly used to treat arthritis, menstrual symptoms, headache, general aches and pains, and various inflammatory conditions. Side effects of ibuprofen Although many people think of ibuprofen as being rather benign, it is associated with an increased risk of heart and circulation problems, including stroke and heart attack, as well as gastrointestinal problems, such as bleeding or perforation of the stomach or intestinal tract. These risks increase the longer you take the drug, although the length of time until it affects any one individual varies depending on their overall health, use of other medications, age, and other factors.

Kinnikinnick Kinnikinnick is a Native American herbal smoking mixture. It is made from a traditional combination of leaves or barks that are believed to have medicinal and spiritual qualities. Etymology[edit] The term "kinnikinnick" derives from the Unami Delaware /kələkːəˈnikːan/, "mixture" (c.f. Ojibwe giniginige "to mix something animate with something inanimate"),[1] from Proto-Algonquian *kereken-, "mix (it) with something different by hand".[2] By extension, the name was also applied by the colonial European hunters, traders, and settlers to various shrubs in which the bark or leaves are employed in the mixture,[3] most often Bearberry (Arctostaphylos spp.)[4] and to lesser degree, Red Osier Dogwood (Cornus sericea) and Silky Cornel (Cornus amomum), and even to Canadian Bunchberry (Cornus canadensis), Evergreen Sumac (Rhus virens) and the Littleleaf Sumac (Rhus microphylla).

5 Juice Recipes For Healthy Nails 5 Juice Recipes For Healthy Nails By PositiveMed-team Edited By Stephanie Dawson Your nails reflect your health and its important to keep them clean and healthy. What we eat is responsible for their appearance and health. Here are 5 juice recipes that can help you keep your nails healthy. 1. Cucumber – Apple Juice How to Separate a Palm Clump There are several species of palm. They are grown through either native propagation or through reproduction and human cultivation. A palm may yield several individual plants. You can separate a palm's clump or root ball to cultivate more than one plant out of a single stock. This requires inspecting the palm to determine if it is worthy of separation. Top 20 Tips to Improve Memory Have you ever been in the middle of a conversation – and forgot what you were going to say seconds after you thought of saying it? Or you get up, walk into another room, and can’t remember for the life of you what you were looking for? (If it were me, I would have been looking for my cell phone/shoes/organic bits of white chocolate I all too successfully hide from myself. Cuz that’s how I roll.) Luckily, our sometimes lack of memory does not mean we are 1) going crazy, 2) have a terrible disease, or 3) going crazy with a terrible disease. Memory gaps are extremely common and are usually the result of stress and fatigue.