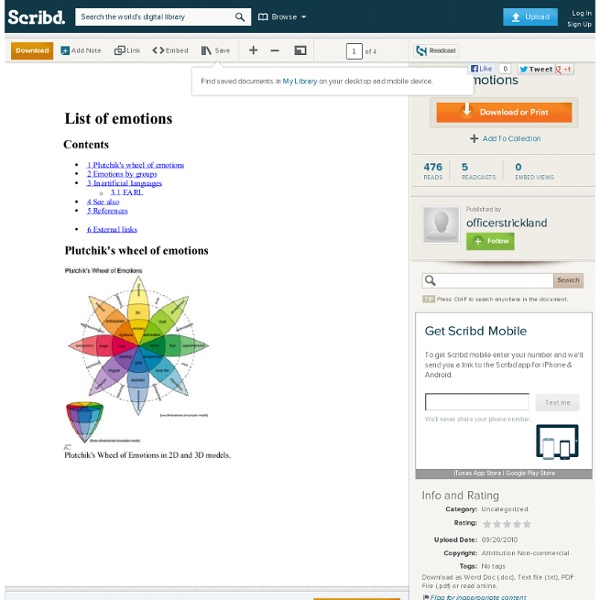 Related:  The Psychology of Emotions

List of Emotions - Human Emotional Chart This list of human emotions plots the descending spiral of life from full vitality of the energy of life and high consciousness through half-vitality and half-consciousness down to death. This list of emotions chart also enables to both predict and understand human behavior in all manifestations, making possible to predict the behavior of a potential spouse, a business partner, employee or friend - before you commit to a relationship. Numbers assigned to this list of emotions chart are arbitrary to show a relative degree or intensity of perceived emotion of happiness in accordance to available creative power or life's energy to the individual. Happiness encompasses a whole range of emotions from certain energy frequency level (4.0 enthusiasm level in our chart below) and up. - What we call the Happiness Domain. Neuroscientist Richard J. Davidson, Ph.D., described it well when he said: happiness “is a kind of a placeholder for a constellation of positive emotional states."

Why Do We Laugh? Why do we LOL? Is ROFLing an innate piece of human behavior? Does our tendency to LMAO say something about us—something that separates us from the non-kekekeing species who share our planet? For Scienceline, William Herkewitz explores the evolutionary history of laughter, a story that shows us that maybe we’re not quite so unique as we’d like to think. It’s not just that we laugh at funny things. The roots of this behavior, scientists think, go back much further and actually play an important purpose. Herkewitz finds that various theories abound, but that the current “best guess” says that humans laugh to tell other humans not to get too fussed over something that could otherwise be regarded as scary or dangerous. If you’re an ancestral human, says Ramachandran, and you come across what you think is a dangerous snake but actually turns out to be a stick, you’re relieved and you laugh. People also laugh to show pleasure, to bond with other members of the group. More from Smithsonian.com:

Human Emotions Chart - Free, Comprehensive Chart Of Emotions The Search for Basic Emotions Table of Contents Before reading this you might want to explore your own emotions. One way to help a person do this is to study this web page: Understand, Identify Release Your Emotions. It was written by Mary Kurus. When you return to this page you can explore how you might want to classify your emotions. In a very simple way the left brain is very logical and linear and is always trying to figure out how the right brain sees the big picture and has more insight into emotions. Later in this web page, I describe seven basic emotions that seem to cover all the many presented on this web page. Language Confusing Before we start, a word of warning. Emotions have all sorts of words used to describe them. If we are to investigate emotions we have to include the observer. Emotions and feelings stem from two great sources, namely the body (sickness, tired, etc) and other people (love, hate, anger, etc). The Plutchik Model of Emotions Various Lists of Emotions Hunter B. Modern Brain/Mind Maps 1. 1.

How Emotionally Intelligent Are You? Here's How To Tell What makes some people more successful in work and life than others? IQ and work ethic are important, but they don't tell the whole story. Our emotional intelligence -- the way we manage emotions, both our own and those of others -- can play a critical role in determining our happiness and success. Plato said that all learning has some emotional basis, and he may be right. The way we interact with and regulate our emotions has repercussions in nearly every aspect of our lives. To put it in colloquial terms, emotional intelligence (EQ) is like "street smarts," as opposed to "book smarts," and it's what accounts for a great deal of one's ability to navigate life effectively. "What having emotional intelligence looks like is that you're confident, good at working towards your goals, adaptable and flexible. The five components of emotional intelligence, as defined by Goleman, are self-awareness, self-regulation, motivation, social skills and empathy. 1. 2. 3. 4. 5. 6. 7. 8. 9. 10. 11. 12.

Emotions Are A Resource, Not A Crutch. | The Emotion Machine Ever since Darwin, and perhaps long before him, it has been theorized that our emotions play a crucial role in adapting to our environment. This means that emotions are not just an inconvenient byproduct of consciousness, but a form of higher cognition – an ability for living beings to experience their world in deeper and more complex ways. Humans are a species that thrive on social relations, and our emotions become a gauge on morality and justice. Emotions however come in many different qualities, degrees, and intensities. Perhaps more important than how researchers conceptualize different emotions is how we experience them. The first key to emotional intelligence is being able to identify these emotions while they occur. Of course even after we are aware of our emotions it doesn’t mean they can’t mislead us to undesirable actions. As reflective and rational beings, we all have the resources we need to adapt to our emotions in ways that facilitate our livelihood. Sources