Firestorm: The story of the bushfire at Dunalley 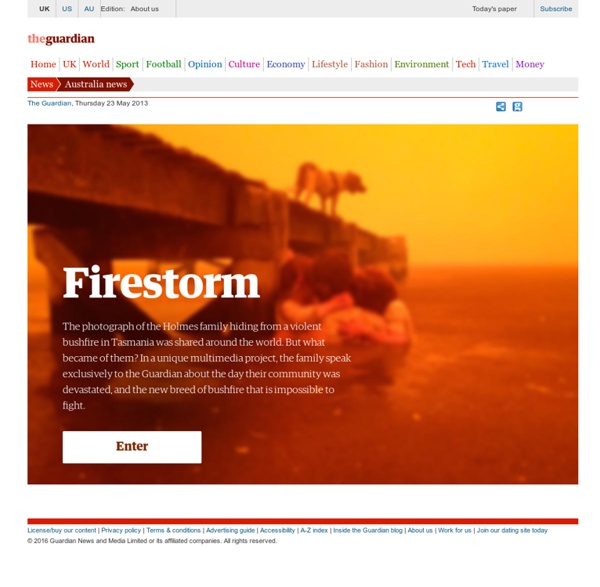 Turn autoplay off Turn autoplay on Please activate cookies in order to turn autoplay off Edition: About us Today's paper Subscribe Firestorm: The story of the bushfire at Dunalley The Guardian, Send to a friend Your IP address will be logged Share Short link for this page: Contact us Report errors or inaccuracies: reader@theguardian.com Letters for publication should be sent to: guardian.letters@theguardian.com Firestorm The photograph of the Holmes family hiding from a violent bushfire in Tasmania was shared around the world. Enter © 2016 Guardian News and Media Limited or its affiliated companies. Related:  MULTIMEDIAS _ INTERACTIF ET LONGFORMAT HYBRIDE • Journalism Inspiration

USA TODAY | BEHIND THE BLOODSHED: THE UNTOLD STORY OF AMERICA’S MASS KILLINGS To analyze mass killings, USA TODAY used the FBI's definition: four or more killed, not including suspects, in an event. The killing may stretch over a day or more and some distance, especially if it includes killings committed in flight or against targeted people. It does not include an extended "cooling-off period" to distinguish this kind of crime from the acts of serial killers. Unlike gun control advocates who just count shootings, USA TODAY analyzed all mass killings, regardless of weapon. USA TODAY began by collecting the FBI's Supplemental Homicide Reports for 2006-11. USA TODAY cross-checked each FBI report with local news reports and sometimes with local law enforcement agencies. USA TODAY also found 26 mass killings not recorded in FBI data. Finally, USA TODAY included several other cases not reported by the FBI, including: One on a U.S. military base. USA TODAY did not include events if deaths stemmed from negligence, such as drunken driving, even if someone was convicted.

Interactive documentary and the future of journalism Snowfall, a New York Times interactive experience which was released in December 2012, brought with it tweets hailing the piece as “the future of journalism”. More recently The Guardian released ‘Firestorm’, which again prompted the same response (from me included…) And the Huffington Post added Elaine Macmillion’s Hollow into the same category stating, ” Anyone who saw promise for the future of web-based journalism after watching/reading The New York Times’ highly innovative “Snowfall,” will positively be drawn to the work produced at “Hollow.” It is next level.” Realistically however, it is not the future of journalism, but it is certainly part of it. Journalism, as an industry, is suffering; the decline of print media, the decreasing newsroom budgets, the demands on journalists and the ongoing debates over paywalls and online advertisement. Back in 2009 The Guardian launched a couple of interactive documentaries, first ‘When was the internet invented?

Vanish Sixteen Tuesday, September 8, 7 AM: Just seven days to go. I awake in my apartment in New Orleans, relieved to find no online indication of anyone wise to my location. Aside from a few random new followers to my Twitter feed, all of whom seem like automated bots, nobody seems to be paying attention to my fake accounts either. I use a gift card to book a flight to New York City on September 15, the final day of my disappearance, and hatch plans to surprise Thompson in his office using a fake security badge. Now Wired has decided to up the stakes, offering me $400 for each of a series of challenges I complete. The first two challenges — clues to which are embedded, with the help of Will Shortz and Lone Shark Games, for the hunters to find in the New York Times crossword puzzle — are to go to the 50th story of a building and to attend a book reading. “Well, I’ve lost mine. In two minutes, I’m on the 50th floor, video camera rolling. Leach sends a text message to Fillinger. On the Lam

Now is the time Our nation has suffered too much at the hands of dangerous people who use guns to commit horrific acts of violence. As President Obama said following the Sandy Hook Elementary School tragedy, “We won’t be able to stop every violent act, but if there is even one thing that we can do to prevent any of these events, we have a deep obligation, all of us, to try.” Most gun owners are responsible and law-abiding, and they use their guns safely. The President strongly believes that the Second Amendment guarantees an individual right to bear arms. But to better protect our children and our communities from tragic mass shootings like those in Newtown, Aurora, Oak Creek, and Tucson, there are common-sense steps we can take right now. While no law or set of laws will end gun violence, it is clear that the American people want action. Why Now Gunfire was probably the last thing U.S. play President Obama speaks at a memorial service for in Tucson, Arizona. Working Together Share on Twitter

Serious Games Directory – Bayreporta Click on the picture to play! ITEMS ADDED: Jan 27, 2015 This page is dedicated to the many experiments in “serious gaming,” a catch-all term that focuses on games about real world issues in an attempt to either educate players or to entertain using real world ideas as a context for storytelling. These games run the gamut in terms of type: you have your basic quizzes, your choose-your-own-adventure-style games, and your full-blown simulation games. News games also fall into this category. The list below is updated irregularly as I run across new works. Quiz/Prediction Games Chicago Tribune Game Center: An idea involving “micro games” embedded throughout news stories. Breaking News/Developing Story Examples #RNC Spotter Guide: Track which GOP celebrities you saw at the #RNC! Data-Driven Interactives Budget Hero: Marketplace attempt to let player decide how to reduce Federal budget deficit. Choose-Your-Own Adventure-Style Are you a Slut? Strategy and Simulation Parody Other

STAINSBEAUPAYS ™ Journalism and video games come together as a new form of storytelling in Brazil Picture this: In order to understand how the mafia works, you take on the role of an undercover cop posing as a globe-trotting drug trafficker. You answer questions about sex education to continue a strip tease performed by a model. To better understand the teachings of major philosophers, you engage in a battle of theories with them. Though it may sound like a joke, video games are gaining traction as a new way to deliver information on news and current events. Newsgames are a relatively new format for storytelling, spanning the divide between reporting and video games, and gaining more credibility in the journalism world. Media outlets like The New York Times, CNN and El Pais have experimented with stories where readers become players in a simulated world. One of those responsible for its success is Fred di Giacomo, who until July of this year was Núcleo Jovem’s editor and is now pursuing an independent career. Fred di Giacomo: I worked seven and half years at Abril.

The Jockey L'Equipe Explore - Born to Climb 1971 Tour de France, Orcières-Merlette to Marseilles stage, on which Luis Ocaña, in the yellow jersey, lost ground to Eddy Merckx. It was the turn of the 1970s. The two men hated each other so much that they would not even greet each other. Three days later, the shake-up he had predicted came to pass during another Alpine stage on the boiling road to Orcières-Merlette. It looked like the Tour was over and history made. Eddy Merckx talking about the 1971 Tour de France and his duel with Luis Ocaña. © Source ASO (1997) Merckx amazed him. The Col du Portillon is a highly symbolic pass between France and Spain. At Portet d’Aspet Ocaña stuck to the Belgian’s wheel and countered each of his attacks with ease. The Castilian was in a good position and hardly noticed the darkening sky above the final inclines before the Col de Mente, where he restricted himself to reining in the Belgian with the help of another good climber, Bernard Labourdette.