How Einstein Thought: Why “Combinatory Play” Is the Secret of Genius 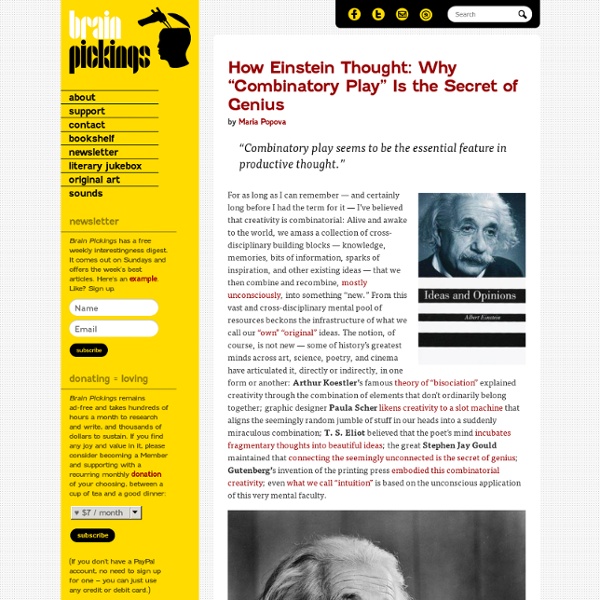 Why We Have Our Best Ideas in the Shower: The Science of Creativity - - The Buffer Blog “I’m not really a creative person”, always struck me as an odd sentence. Could it really be that some of us are born to be more creatively gifted than others? If so, I thought at first, that’s definitely a downer. In school, what was considered “being creative”, like writing or drawing nice pictures was never my strength. It bugged me for a while I have to say. And the following science will hopefully prove it, in case you ever had any doubts about your own creativity. “A creative idea will be defined simply as one that is both novel and useful (or influential) in a particular social setting.” – Alice Flaherty This applies to every field Flaherty explains, including programming, business, mathematics together with the more traditional “creative” fields, such as music or drawing. Our brain on creativity: The example of free-style rap So, what is actually active in our brain when we are doing something creatively? To make it a bit more understandable: Still, that’s not all there is to it.

Networked Knowledge and Combinatorial Creativity by Maria Popova Why creativity is like LEGO, or what Richard Dawkins has to do with Susan Sontag and Gandhi. In May, I had the pleasure of speaking at the wonderful Creative Mornings free lecture series masterminded by my studiomate Tina of Swiss Miss fame. I spoke about Networked Knowledge and Combinatorial Creativity, something at the heart of Brain Pickings and of increasing importance as we face our present information reality. These are pages from the most famous florilegium, completed by Thomas of Ireland in the 14th century. In talking about these medieval manuscripts, Adam Gopnik writes in The New Yorker: Our minds were altered less by books than by index slips.” Which is interesting, recognizing not only the absolute vale of content but also its relational value, the value not just of information itself but also of information architecture, not just of content but also of content curation. You may have heard this anecdote. Kind of LEGOs. And I like this last part. Do stuff.

Pete Seeger on Combinatorial Creativity, Originality, Equality, and the Art of Dot-Connecting by Maria Popova “All of us, we’re links in a chain.” In 1987, shortly after being appointed editor of SongTalk, the journal of the National Academy of Songwriters, Paul Zollo began interviewing some of the greatest songwriters alive — Bob Dylan, Paul Simon, Madonna, Frank Zappa, David Byrne, and dozens more — “always with the assurance that my focus is strictly on songwriting and the creative process, as opposed to the celebrity-oriented queries often directed to them by the press.” These remarkably candid and wide-ranging conversations, collected in the impressive tome Songwriters On Songwriting (public library), transcend the realm of songwriting to unmask the essential elements of ideation in just about every creative discipline, from writing to illustration to design. Pete Seeger (photograph by Annie Leibovitz) Don’t be so all-fired concerned about being original. I look upon myself and other songwriters as links in a long chain. I’m sitting in a plane, kind of dozing. Share on Tumblr

The Difference Between Knowledge and Experience Einstein on Kindness, Our Shared Existence, and Life’s Highest Ideals by Maria Popova “Without the sense of fellowship with men of like mind… life would have seemed to me empty.” In times of turmoil, I often turn to one of my existential pillars of comfort: Albert Einstein’s Ideas and Opinions — the definitive collection of the great thinker’s essays on everything from science and religion to government to human nature, gathered under the supervision of Einstein himself. It’s been a challenging week, one that’s reminded me with merciless acuity the value of kindness and compassion, so I’ve once again turned to Einstein’s timeless “ideas and opinions” on this spectrum of subjects. On the ties of sympathy: How strange is the lot of us mortals! On public opinion, or what Paul Graham might call prestige: One becomes sharply aware, but without regret, of the limits of mutual understanding and consonance with other people. On our interconnectedness, interdependency, and shared existence: On good and evil, creative bravery, and human value: On life’s highest ideals:

The Creativity Mindset I absolutely love all of the emphasis on mindsets these days. There are growth mindsets (which I discuss in The Educator with a Growth Mindset: A Staff Workshop) and maker mindsets (which I discuss in The Mindset of the Maker Educator). Mindsets are simply defined as “the ideas and attitudes with which a person approaches a situation.” Creativity is a process in which the elements of mind consolidate in a completely new manner and something original comes into existence, a form of behavior in which a person resists routine answers, tolerates, and even seeks out the ambivalence, insecurity and vagueness that may serve as a basis for a new order (Gyarmathy, 2011). Some of the characteristics of the Creativity Mindset include: Believes in One’s Own CreativityEmbraces CuriositySuspends Judgement – Silences the Inner CriticTolerates AmbiguityPersists Even When Confronted with Skepticism & RejectionTaps Into Childlike Imagination; a Child’s Sense of Wonder Believes in One’s Own Creativity

Austin Kleon on Cultivating Creativity in the Digital Age by Maria Popova The genealogy of ideas, why everything is a remix, or what T.S. Eliot can teach us about creativity. UPDATE: Kleon’s Steal Like an Artist synthesizes his ideas on creativity and is absolutely fantastic. Austin Kleon is positively one of the most interesting people on the Internet. In this excellent talk from The Economist‘s Human Potential Summit, titled Steal Like an Artist, Kleon makes an articulate and compelling case for combinatorial creativity and the role of remix in the idea economy. Kleon, who has clearly seen Kirby Ferguson’s excellent Everything is a Remix, echoes the central premise of my own recent talk on networked knowledge and combinatorial creativity: Nothing is completely original. Amen. And even more in the vein of the Brain Pickings ethos, reminiscent of this favorite quote by iconic designer Paula Scher: We can pick our teachers and we can pick our friends and we can pick the books we read and the music we listen to and the movies we see, etcetera.