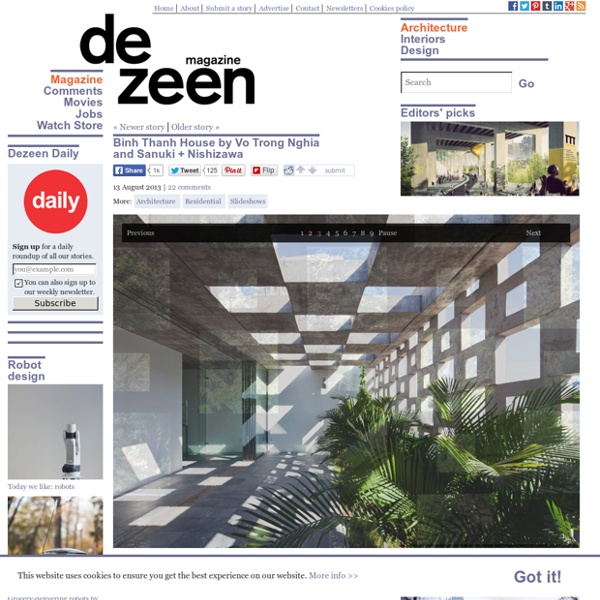 Vietnamese studio Vo Trong Nghia Architects has completed a house in Ho Chi Minh City with half of its floors screened behind hollow concrete blocks and the other half exposed to the elements (+ slideshow). Working alongside architects Sanuki + Nishizawa, Vo Trong Nghia Architects designed the six-storey Binh Thanh House for three generations of a single family, adding curved concrete ceilings, a spiral staircase and gardens on each floor. Alternating levels offer a mixture of both air-conditioned and naturally ventilated spaces. "The concept of the house is to accommodate two different lifestyles in a tropical climate," said the architects. The second and fourth floors have glazed facades that slide open, bringing natural light and cross ventilation through a pair of family living rooms that both occupy an entire storey. One features an undulating concrete ceiling, while the other is framed by a row of barrel vaults. Vo Trong Nghia Architects has offices in Ho Chi Minh City and Hanoi.

Prototypal Ghanaian home made from recycled materials Graduate shows 2015: this student-designed house in Ghana pairs rammed-earth walls with translucent screens made from used water packaging, demonstrating how traditional construction can be combined with recycling (+ slideshow). Nkabom House was designed by Anna Webster, a fourth-year architecture student at The Cass, London Metropolitan University's school of art, architecture and design. The original concept was a response to a competition inviting proposals for a single-family house to be built in a remote village in Ghana's southern Ashanti region. Related content: more rammed-earth architecture

Kontum Indochine Wedding Restaurant by Vo Trong Nghia Architects Weddings and parties take place inside halls framed by stone, timber and bamboo at this events building for a Vietnam hotel by Vietnamese firm Vo Trong Nghia Architects (+ slideshow). The Kontum Indochine Wedding Restaurant is the second building Vo Trong Nghia Architects has completed at the Kontum Indochine Hotel, following a bamboo cafe that is situated next door. There are three banquet halls contained inside the building - one on the ground floor that seats 800 guests and two on the first floor that each accommodate up to 400 people. The largest space is known as the Stone Hall, as it surrounded by ridged walls made up of basalt stone slabs. Some of the slabs have been polished, while others have been either hammered or left raw.

Concrete bunker in the Netherlands transformed into a vacation home Belgian studio B-ILD has converted a wartime bunker into an austere holiday home where guests sleep beside raw concrete walls and home comforts are reduced to the bare essentials (+ slideshow). The half-submerged bunker has an internal area of just nine square metres, with less than two-metres head height, so furnishings had to be kept to the absolute minimum and everything had to be custom made to make optimum use of space. "The design concept was to create a flexible and adjustable interior that could fir four people inside," explained Bruno Despierre, one of the five architects that make up B-ILD. "We decided to keep the interior stark, since we only wanted to foresee the basic needs for visitors," he told Dezeen. The Bunker Pavilion is located on the rural site of Fort Vuren in the Netherlands, which is part of the old Dutch waterline defence system that has been defunct since the end of World War Two.

Interiors: why upcycling is having its moment Not long after Laura McDonald and her boyfriend Daniel moved into their own flat in June this year, Daniel came home one night with a broken dressing table that he’d found in a back alley. Rather than chucking it straight in the bin, however, McDonald, 26, mended it, sanded it and painted it, and the piece ended up in pride of place in their bedroom. The dressing table was followed by a chest of drawers, then a pair of bedside tables, then a dresser in the living room, which acquired a chevron design to its front. After spotting an expensive mirror adorned with toy cars on a website, MacDonald decided to make her own for a fraction of the price. She spray painted lampshades and revamped picture frames.

Kontum Indochine Cafe with conical bamboo columns by Vo Trong Nghia Fifteen conical bamboo columns support the roof of this waterside cafe designed by Vo Trong Nghia Architects at a hotel in central Vietnam (+ slideshow). Referencing the shapes of typical Vietnamese fishing baskets, the top-heavy bamboo structures form a grid between the tables of the open-air dining room, which functions as the restaurant and banqueting hall for the Kontum Indochine Hotel. Vo Trong Nghia Architects designed the restaurant without any walls, allowing uninterrupted views across the surrounding shallow pools of water, and beyond that towards the neighbouring river and distant mountains.

Weathered steel fins surround Corten House by DMOA architecten Strips of pre-rusted Corten steel run in vertical columns around this Belgian house by DMOA Architecten (+ movie). DMOA Architecten designed the three-storey home, for a couple in the Antwerp suburb of Kontich. The Corten House is named after the brand that produces the weathered steel panels that surround its walls and perimeter. The local studio welded the material onto perforated metal sheeting to form a cladding that screens the front of the building from passing traffic. The thin plate-like sections jut out from the facade like fins. "We wanted a material that gave the feeling of a whole," said DMOA architect Matthias Mattelaer.

Topshop Reclaim: The Lowdown - Topshop Blog Style When you think eco-fashion you think hemp and patchwork, right? That’s about to change with our new Topshop Reclaim collection. It all started as a collaboration with eco pioneers Orsola de Castro and Filippo Ricci and their company Reclaim to Wear. Stone House by Vo Trong Nghia This spiralling stone house in Vietnam by architect Vo Trong Nghia has grass on its roof and an oval courtyard at its centre (+ slideshow). Vo Trong Nghia wanted to avoid copying the concrete and plaster buildings that are common in the surrounding Quang Ninh province and to instead create "a space that can record the changes and traces of time over the years through the aging of natural materials". Following this concept, the two-storey Stone House is constructed from locally quarried stone blocks that are stacked up in an alternating grid to give a brickwork pattern to the walls. Dark timber frames surround the windows and stand out against the muted grey colour of the stone.