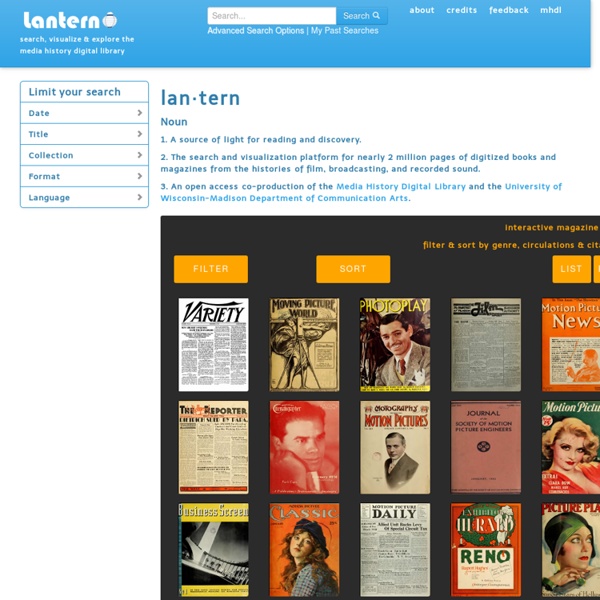 How Cryptocurrencies are Transforming the Oldest Profession The world is moving toward a paper-free financial system, but in the borderline-legal organizations of the world’s underbelly economy, cash still reigns as king. Any good business owner is keen to please his or her customers, particularly when it comes to prostitution. To avoid the awkward fumble of cash after a lusty romp, the frictionless convenience of digital payment systems is becoming more attractive.

Web Film & Video The following films are presented for educational and non-commercial use only. All copyrights belong to the artists. About UbuWeb Film & Video UbuWeb is pleased to present thousands of avant-garde films & videos for your viewing pleasure. Focus on Film Welcome to Focus On Film. On Film is a jointly funded project by The National Archives and the South East Grid for Learning. This site presents film as a historical source and considers its advantages and disadvantages as evidence for the past. Film Compositions Are Dissected to Show the Brilliance of Iconic Scenes The Shining Last year, Raymond Thi reignited our appreciation for film cinematography. Through his app, Composition Cam, he highlighted the brilliant arrangements of memorable scenes in iconic movies like The Shining, Ghostbusters, and Citizen Kane. Thi has recently expanded his idea by examining even more visually stunning film and TV compositions. Thi places bright pink lines to show how each scene is built.

The 4 Secret Psychological Tools Filmmakers Use It may come as no surprise when I tell you that my mother used to call filmmakers the biggest fibbers and fakers out there. I guess she saw through all the shamanic tricks and sleights of hands that filmmakers use to get their stories out there. There is more. Filmmakers need to know how to get people to click on stuff on the internet. This helps them get people to watch their trailers, their webseries, their crowdfunding campaigns and hopefully buy tickets to their festival screenings. Two things happened to me this week: 1 150 films gratuits en ligne: grands classiques, indes, noirs, westerns Watch 1,150 movies free online. Includes classics, indies, film noir, documentaries and other films, created by some of our greatest actors, actresses and directors. The collection is divided into the following categories: Comedy & Drama; Film Noir, Horror & Hitchcock; Westerns (many with John Wayne); Martial Arts Movies; Silent Films; Documentaries, and Animation. We also have special collections of Oscar Winning Movies and Films by Andrei Tarkovsky and Charlie Chaplin. Free Comedy & Dramas

Film Terms Glossary - Dictionary Film Terms Glossary: Oftentimes, film-making terms are not clearly defined for the average person. In order to be knowledgeable about the movie-making art form and the techniques of cinema, one must understand the fundamental vocabulary and language of film studies. Therefore, some of the most basic and common terms are defined in this compendium for reference. Simple definitions are provided for often complex terms as a baseline for media literacy. Illustrations and examples from films are provided with many of the terms, to help describe them more fully.

Famous Album Artwork Extends Beyond the Edges to Reveal Funny New Perspectives If you ever wondered what existed beyond the edges of a music album cover, now's your chance to find out. For this series called Album Covers–The Bigger Picture, web design studio Aptitude was inspired by famous artwork from bands and musicians like Nirvana, Fatboy Slim, and Michael Jackson. Clever designers started with very well-known imagery and then imagined what might be taking place beyond the square frames. In doing so, they completely change the meaning of the many iconic works. Men in black: The Stranglers’ BBC documentary about the color black, 1982 In 1982, BBC Southwest aired a short documentary about the color black made by two members of the Stranglers. Singer/guitarist Hugh Cornwell and drummer Jet Black “were asked to put together a piece about the colour black for an arts programme called RPM,” according to Cornwell’s autobiography Around this time, the Stranglers were obsessed with the sinister Meninblack (as they stylized it) legends of UFO lore. They had released their great concept album, The Gospel According to the Meninblack , and changed their names to Hughinblack, JJinblack, Daveinblack and Jetinblack; they were even thinking about changing the band’s name to the Men in Black. Ultimately, these pursuits scared the band shitless.