Scale of Universe - Interactive Scale of the Universe Tool 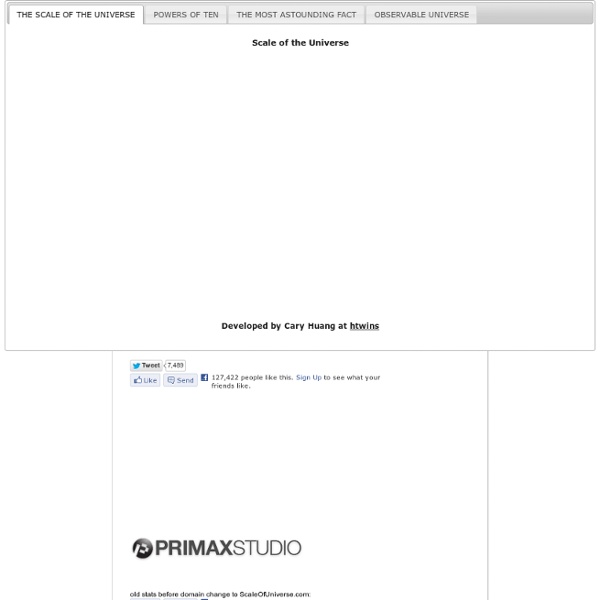 Galaxy Zoo: Hubble 57+ Free Image Gallery, Slideshow And Lightbox Solutions Actually at first I wanted simple image gallery solution for web design project, but when I started to search I changed my mind and thought how great would be to create article about all the best image gallery solutions available on the Internet. So here it is – this list is separated in 3 big categories like Ajax, JavaScript and Lightbox based galleries, CSS based galleries and FLASH based galleries, so You can easy switch to category You got interest in. I think here You’ll find gallery for every needs, should be enough to choose from! This article has been updated on May 16,2012 and we just created new roundup of 30 jquery image and slider plugins, which have been released just on 2012! Everything is super fresh, enjoy! Slider Revolution Slider Revolution is a responsive(mobile friendly) or fullwidth slider with must-see-effects and meanwhile keep or build your SEO optimisation (all content always readable for search engines). Few other important benefits to Slider Revolution: 1. 2. 4.

Scientists Discover The Oldest, Largest Body Of Water In Existence--In Space Scientists have found the biggest and oldest reservoir of water ever--so large and so old, it’s almost impossible to describe. The water is out in space, a place we used to think of as desolate and desert dry, but it's turning out to be pretty lush. Researchers found a lake of water so large that it could provide each person on Earth an entire planet’s worth of water--20,000 times over. Yes, so much water out there in space that it could supply each one of us all the water on Earth--Niagara Falls, the Pacific Ocean, the polar ice caps, the puddle in the bottom of the canoe you forgot to flip over--20,000 times over. The water is in a cloud around a huge black hole that is in the process of sucking in matter and spraying out energy (such an active black hole is called a quasar), and the waves of energy the black hole releases make water by literally knocking hydrogen and oxygen atoms together. The new cloud of water is enough to supply 28 galaxies with water.

Flame Painter | free online paint program Flame Painter Gallery Flame Painter is a unique paint program, it belongs to my 'I am an Artist' experimental project. I think with tools which inspires you, everyone can be an artist. You can try it here, change different brush settings and paint your own flame paintings. When you change the background from black to white, the palette changes from additive to subtractive and the feeling of the painting is very different. Tools: Click here for Flame Help in German . COLOR - brush color SATURATION - brush saturation OPACITY - brush opacity C - color cycling [ on | off ] P - color per pixel [ on | off ] FADE - fade in/out [ on | off ] SIZE - brush size SOFT - brush softness CENTER - global forces FOCUS - local forces CHAOS - very chaotic parameter NOISE - crazy noise parameter ERASER - eraser tool SAVE - opens painting in a new popup window for saving (press Right Button > Save Picture As...) Keyboard Shortcuts: [ spacebar ] - clear screen [ Z ] - undo / redo last step Save Picture:

The Sounds of Pulsars A pulsar is a highly magnetised neutron star, with a radius of 10-15 km, having somewhat greater mass than the Sun which has a radius of approximately 1 million km. Radiation is beamed out along the magnetic poles and pulses of radiation are received as the beam crosses the Earth, in the same manner as the beam from a lighthouse causes flashes. Being enormous cosmic flywheels with a tick attached, they make some of the best clocks known to mankind. These sounds directly correspond to the radio-waves emitted by the brightest pulsars in the sky as received by some of the largest radio telescopes in the world. To listen to the pulses of a radio pulsar, click on its arrow icon.

Spacegallery - jQuery plugin About Again another image gallery. Click on the images bellow to see it in action. Download spacegallery.zip (205 kb): jQuery, Javscript files, CSS files, images, examples and instructions. Changelog The first release release. Implement Attach the Javascript and CSS files to your document. Invocation code Prepare a block level element with some images inside. Options A hash of parameters.

Bellatrix Orionis - Views from the edge of the Universe | Bellatrix Orionis Ensign Software - ESPL: Dances of the Planets The planets in the heavens move in exquisite orbital patterns, dancing to the Music of the Cosmos. There is more mathematical and geometric harmony than we realize. The idea for this article is from a book Larry Pesavento shared with me. The book, 'A Little Book of Coincidence' by John Martineau, illustrates the orbital patterns and several of their geometrical relationships. . Take the orbits of any two planets and draw a line between the two planet positions every few days. Earth: 8 years * 365.256 days/year = 2,922.05 days Venus: 13 years * 224.701 days/year = 2,921.11 days (ie. 99.9%) Watching the Earth-Venus dance for eight years creates this beautiful five-petal flower with the Sun at the center. (5 is another Fibonacci number.) Another intriguing fact is the ratio between the Earth's outer orbit and Venus's inner orbit is given by a square. In the following dance patterns, the planet pairing is given and the number of orbits of the outer planet. Article by Howard Arrington

RuSpace | Soyuz console Fighter jet and spaceship cockpits seem to fascinate me and that of the Soyuz is no exception; unfortunately there are no detailed diagrams or manuals publically-available on the Internet that I know of! The following diagrams are ones I have collected from various places, and are the best I can do at the moment. The Soyuz TM Information Display System is called the “Neptune”, «Нептун»; for the TMA it is the Neptune ME. Some of the buttons and controls on the console can’t be reached without a stick to poke at them! The computer used on the Soyuz is called Argon, «Аргон». Some of the Russian translations below are uncertain or unclear (I couldn’t find exact definitions for them). Soyuz SOI “Sirius” for the Soyuz 7K and Soyuz A8 spaceships СОИ «Сириус» кораблей – Союз-7К», Союз-А8» Soyuz T Descent module console SOI “Neptune” for the Soyuz T spaceship Voltage and current indicator.Indicator and manual information input unit for the onboard computer.KEI – Integrated? Soyuz TM Soyuz TMA Diagrams

NASA Astrobiology Polaroid Gallery v.1.01 About Polaroid Gallery is a free, opensource flash gallery developed by myself, Christopher Einarsrud, in the year of 2006. I was originally going to use this for my online portfolio, but I ended up going for something completely different. I thought that it might come in handy for someone else, so I decided to release it here. How it works The script loads images and image titles dynamically from an external xml file or a flickr RSS feed. View fullscreen flickr example Updates July 16, 2007 You can now pass the xml-file you wish to load as a parameter when embedding the flash. Download Download Polaroid Gallery v.1.01Download FLA file(Note: The FLA file is not very well commented, and the parts that are is in Norwegian) Suggestions Comments, suggestions and questions can be sent to polaroid@no3dfx.com Donations You can donate money thru paypal if you wish to support further development of Polaroid Gallery v.1.01 and other upcoming opensource projects. Licence